The Secret Jewish History Of The Chinese New Year 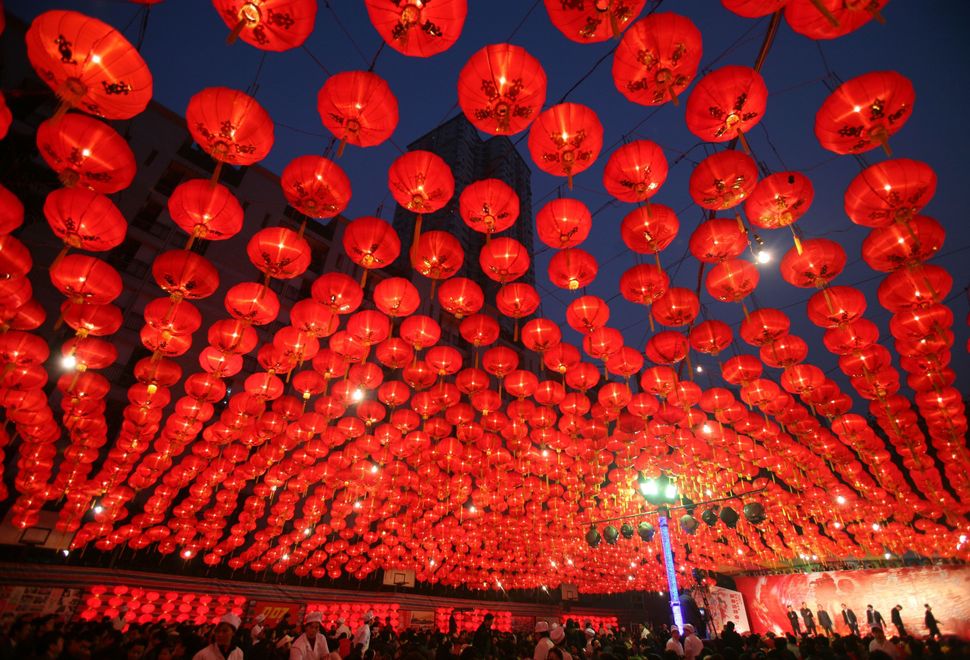 This year, the Chinese New Year falls on Friday, February 16, the day when revelers — by some estimates, fully one-sixth of the earth’s population — will usher in the Year of the Dog. The day is observed throughout China, Taiwan, Vietnam, Singapore and some other Asian countries, as well as in Chinatowns around the world. Originating in southern China, in the greater region of Guangzhou, the observance is also known as Spring Festival, which makes sense given the area’s humid, subtropical climate, where the average daily temperature in February is 60 degrees.

Jews, of course, have their own spring festival, otherwise known as Pesach, or Passover. It’s sometimes referred to as Chag Ha’aviv, which means, well, spring festival. And while the Jewish New Year is commonly thought of as Rosh Hashanah, which typically comes around in early fall, Passover is actually considered one of four possible Jewish New Years. The term “Rosh Hashanah” does not appear in the Torah; in fact, in both Exodus and the Book of Ezekiel, the Hebrew month of Aviv — later renamed Nisan — is referred to as the beginning of the year or as the first month of the year. Nisan is also the month of Passover. To make matters even more interesting, the Chinese word for year is nian.

Chinese New Year, like Passover, Rosh Hashanah and all Jewish holidays, pops up at various times each year within two months of the Gregorian calendar (January and February), because the Chinese calendar, like the Hebrew calendar, is based on the Metonic cycle, a lunisolar calendar that intercalates an extra month every 19 years (as opposed to the Gregorian, with its months of varying lengths and its additional day every four years). Generally speaking, Chinese New Year falls on the second new moon after the winter solstice.

But the similarities between Chinese New Year and Passover aren’t merely those of calendric quirks. The holidays share rituals and practices that bear striking and provocative resemblances.

In preparation for Chinese New Year, families thoroughly clean house from top to bottom. The belief is that by literally sweeping away all dirt, any remaining bad luck from the previous year will be wiped away, thereby preparing homes for good luck in the new year. It doesn’t take too much of an imagination to see parallels to the Jewish practice of ridding one’s house of hametz, literally, crumbs of grains forbidden during Passover but understood to have the spiritual implication of ridding oneself of the “puffiness” of arrogance or pride.

Before New Year’s celebrations begin, Chinese homes are decorated in red, a practice traced back to the story of a Chinese New Year monster who roamed around eating children and livestock. Once people discovered that the monster was afraid of the color red, they began hanging red lanterns, wearing red clothes, draping doors with red cloth and posting red scrolls printed with lucky messages on their doorposts!

In other words, mezuzahs, which, in Judaism, are amulets containing miniature scrolls with auspicious Biblical verses that are hung on door thresholds. But in the Chinese case, red ones, akin to the color of the blood (of the Pesach offering, or the sacrificial lamb) that the Jews in ancient Egypt painted on their doorposts as a signal to the angel of death to pass over their houses while on his way to carrying out the plague of the killing of the firstborn. From this evolved the spiritual practice of the mezuzah. And, in the Chinese case, the red amulets are meant specifically to ward off an evil monster bent on killing children.

Just as the custom in Judaism is to usher in most festivals with a ritual meal attended by family on the night before the first day of the holiday (as with the Passover Seder), Chinese New Year also kicks off with a “reunion dinner” with special foods. In China, dumplings are traditional — that’s kneydlekh (matzo balls) to you. Nian gao — a sticky sweet cake akin to a Rosh Hashanah honey cake — is customary at the meal. And perhaps recognizable to those Jews whose family elders weren’t as creative in the kitchen as others, boiled chicken is often served.

One other Chinese New Year custom has its analogue in a Jewish tradition; Chinese parents give children gifts of money in red-paper envelopes. And Chinese children have developed their own custom surrounding the giving of what could well pass for Hanukkah gelt. These days, they sometimes jokingly say to their elders, “Congratulations and be prosperous; now give me a red envelope!”

Seth Rogovoy is a contributing editor at the Forward. He often writes about the discovery of Jewish themes and practices in unlikely places.

The Secret Jewish History Of The Chinese New Year