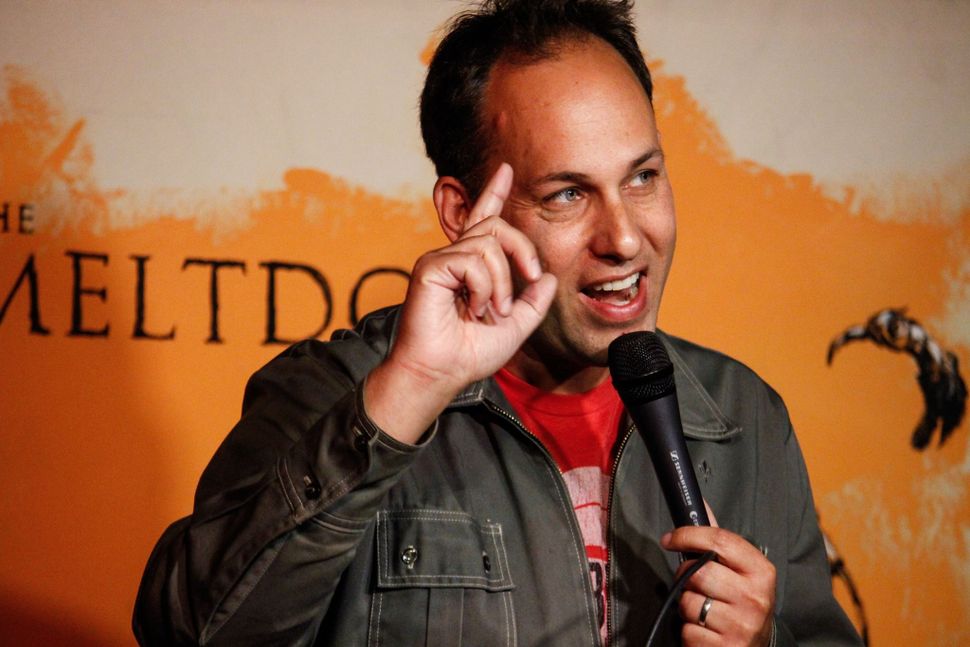 Green’s deadpan comedy may not please everyone — “SF-born socialist Jewish union worker comic in Cuba” itself sounds like a punchline, and one suspects that a White House invitation is not forthcoming. But those who appreciate the legacies of Leon Trotsky, Saul Alinsky, Tom Lehrer, Paul Goodman, Irving Howe and of course Lenny Bruce and George Carlin will recognize in Green a kindred soul.

The 42-year-old father of two has just released his second comedy CD, “The Whiteness Album.” He spoke with the Forward’s Sheerly Avni from Havana, where his wife is completing her doctorate in medical anthropology.

SHEERY AVNI: The sign you made for the Women’s March last year said, “I was going to make a sign, but I’m not interested in what white men have to say anymore.” And yet, here you are, a white man, saying stuff, onstage and on comedy albums. And we’re supposed to pay for it! How do you reconcile this?

NATO GREEN: I know. I try to implicate myself in my comedy. What’s the fun of only pointing the finger at everyone else? Anyone can make fun of the other guy.

I’ll be happy to stop saying stuff if that’s what it would take to end oppression. I have trouble imagining why me specifically not saying stuff would help, but I’m willing to take one for the team.

What’s it like being Jewish in Cuba these days?

I went to the synagogue in Havana for their Hanukkah party. Like any shul in Berkeley, the lobby had as big a display of the time Fidel Castro visited as the time Steven Spielberg visited. The guy who greeted me said: “Everyone is welcome here. We don’t have much, but we share what we have.” I thought, “This Judaism sounds a lot like socialism.” Cuban Jews have something that’s tragically missing from our Hanukkah parties, which is many synchronized dance routines. The dancing was bananas.

Let’s go to one of the funniest bits on your new album. Do you consider Jews white? Outside of San Francisco and Cuba, at least?

First of all, let me acknowledge that I know there are Jews of color, and the bit is not about them.

Jews are white. Sometimes. We also choose how white we are. Some of my racist relatives are really into being white.

And in Israel. Are we white there?

My arguments about whiteness are specific to America. I’m not sure the terms and racial hierarchies that shape power relations in the U.S. are meaningfully transferable, or that whiteness is the most useful way to talk about Israeli Jews.

In Israel we may or may not be white, but we are stupid.

Stupid in what way?

Trump has done something unprecedented by uniting Jews and Nazis. He deserves more credit for that. He can bring together Sheldon Adelson, [Benjamin] Netanyahu and Jared Kushner with all his Nazi supporters around a shared vision of killing everyone else. It’s almost inspiring.

I’m the country’s only semi-functional hybrid of comedian and union negotiator. I can’t remember anymore which is my main hustle and which is my side hustle, but I do work with unions as a negotiator. Trump is right in the sense that all negotiations are the same: It doesn’t matter whether you’re negotiating a film development deal, which of my twin daughters will have to practice piano first, or peace in the Middle East. It’s all the same.

And as a professional negotiator, it offends me that Trump can swan around talking about his great deals when he’s obviously so bad at making deals. He clearly doesn’t understand the very basic things anyone who actually negotiates deals has to do.

For example, deals are all about details. Trump doesn’t have the intellectual capacity, interest or attention span to understand the details of any of the deals he’s involved in. He keeps declaring that Obama negotiated bad deals, but you’re hard-pressed to find him identifying any specific provision he finds objectionable.

And so it is with Israel. Every negotiator in the galaxy knows that there aren’t that many variations of how this story ends.

Before you went to Cuba, you tried out life as a New York Jew. How was it?

It was amazing to be in a place with so many Jews and such a diversity of Jews that it didn’t matter for me to be a Jew. In a way, there are such visible Jews in New York, and such Jewy Jews, that I almost didn’t seem Jewish. I almost felt like an actual human instead of a Jew.

Also, in San Francisco, even if you’re not gay, you have to be literate in gay culture. New York was like that for Jews. In San Francisco, people mainly understood Jews in theory.

What thoughts do you have about the #MeToo movement and its impact on comedy?

The thing, I think, that gets glossed over in talking about #MeToo in comedy is the relationship between sexual assault and harassment (what reporters are adorably calling “alleged inappropriate misconduct”) and power. There is obviously a link between sexual assault of women in show business and the number of female directors and producers and late-night hosts and showrunners, and the percentage of women in writers’ rooms and the documented gender pay disparities.

It’s an opportunity for me, not just to feel smug because I have managed to get through this life without showing my penis to anyone at work, but to move more women into positions of power in entertainment. This isn’t only selfless on my part, it makes everyone better.

When I end up on a show with all straight white guy comedians, I get bored. The audience is never 100% straight white guys, and anyone who isn’t is noticeably more invested in caring about a diverse show. And when a show is diverse, it makes me step my game up: Am I explaining things clearly to people who don’t share my experience? Am I really saying what I mean? Am I taking lazy shortcuts at someone’s expense instead of writing a better joke?

Does this new administration make it easy to do lazy comedy?

For me as a comic, Trump is the best of times and the worst of times. I mostly stopped writing material about national politics during Obama’s second term. I was bored. It felt like writing this year’s version of last year’s jokes. Same arguments, same themes. This moment is great for me. A lot of comics feel like they have to talk about national politics whether or not they have an interesting take. But for me, it was like being a sleeper agent who got activated. The challenge of writing comedy about what’s happening now, besides the pace and intensity of the news that I address on the album, is that suddenly every comedian is a political comedian — including the entire internet. I had jokes I’d written in the last five years that got dumped because the same idea later became a viral meme or something. Now I have to work harder to write more unique jokes because your aunt shared a meme from George Takei.

The speed of information transfer makes it harder.

Yeah, and the other challenge is coming up with material that won’t be stale in a week, has an angle that only I can do and, hardest of all, can make people laugh while recognizing how genuinely terrified they are. When white supremacists are murdering peaceful marchers, and immigrants are being deported, doing jokes about Trump’s hair feels trivial.