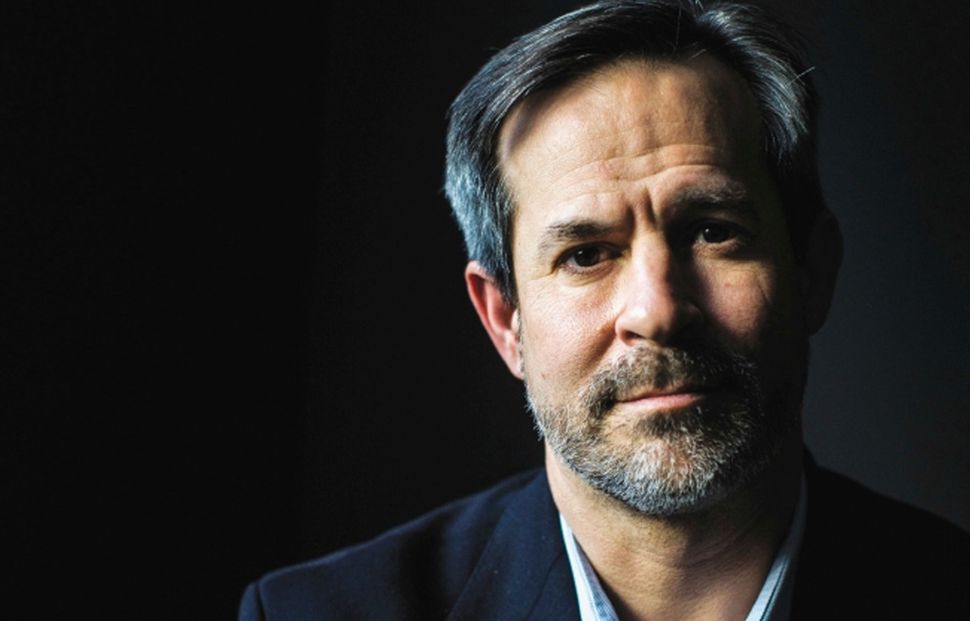 After he fell victim to an onslaught of vile anti-Semitic taunts on Twitter, and discovered that users were enclosing his name in parentheses — (((Jonathan Weisman))) — to connote his being Jewish, Jonathan Weisman became a reluctant expert on the rise of the so-called “Alt-Right.” In his new book, “(((Semitism))),” Weisman delves into the ancient roots of this movement, as well as the technological and political changes (see: President Trump) that have given these hateful people a new platform and an unprecedented degree of political legitimacy. The book also features reflections on Weisman’s on again-off again relationship to Judaism, and tips for how Jewish communities can respond to renewed threats.

In a wide-ranging conversation, Weisman spoke to the Forward’s Sam Bromer about the question of how to respond to the Alt Right’s hate, how certain Jewish organizations’ single-minded focus on Israel has become a distraction from political organizing, and his thoughts on anti-Semitism on the political Left.

Forward: What is unique today about the anti-Semitism that we’re seeing in America from groups on the far right and from the alt-right.

Weisman: The alt-right is this bizarre combination of ancient anti-Semitism — this notion of the all powerful Jew pulling the strings on left wing movements — as both rapacious, greedy and radical. All these notions have been around forever. But the alt right has combined them with this online hipsterism, and the savvy of how to use the Internet to spread its ideology. There’s nothing particularly new about the ideology but there’s something quite new about the way the alt right is going around spreading and organizing the ideology.

What was the research like on this project, given you are not internet-native but had to understand these bizarre subcultures?

What do you mean by “wrestling with the response question?”

Well, there was this notion of what to do about the alt-right, how seriously to take it. And there were smart people who said that the right is not that powerful; it’s just this kind of Internet creation. And everything Richard Spencer and his folks do is designed to get attention for Richard Spencer and his folks. And so therefore the best thing to do is to ignore them. The question of how to neutralize the right was one that really haunted me because obviously any attention I gave to them in book form or online or in print did give them real pleasure. They loved it. They love it when we talk about them. I talked to the rabbi from my synagogue — Bethesda Jewish congregation, which is no longer, but it was my synagogue when I was writing this — and that rabbi was very much of the belief that the best response is ignoring them. But then I remember speaking with another Rabbi, Daniel Zemel at what is now my synagogue Temple Micah, and he just quoted scripture. He said, the Jew is to stand up to injustice wherever injustice is found. And I decided that ultimately — it was remarkable to me that I never really thought about religion as a response to an attack on a religion. It actually was a jolt to me and it was a realization of how far I as a Jew and so many other Jews have moved away from spirituality as an answer to the problems that affect us.

How do you think American Jews’ allegiance to Israel has affected their solidarity for some on the left and other marginalized groups. And do you think it’s productive to speak of American Jews as a single monolithic entity?

I think it certainly is reductive speak of a single Jewish community, no question. But I do think that it is not unfair to say that Jews have become obsessive about Israel — that when we argue, we generally argue over Israel. Because the American Jewish community has become so obsessed with Israel, so aligned with what is best for the Jewish state, we have lost sight of what is actually happening in that country. And I think that has been extremely detrimental to the Jewish community. I think that that the rise of bigoted nationalism has come without any notice in part because so many Jews were sent or were simply diverted to this obsessive cause of Israel. I devoted an entire chapter to the Israel obsession. So I feel really strongly about that.

It’ll probably be a controversial chapter but maybe a necessary reckoning for Jewish readers.

The whole book is actually pretty hard on American Jews. But I do think there’s a chapter on Israel will be the most controversial.

As someone who is very assimilated, do you think people who are really involved in the Jewish community might be wary of your insights?

I think so. I’m sure that especially Orthodox Jews will look at this as a dilettante wading into Judaism. But from my perspective I think that my on again off again association with my Judaism will resonate with a lot of Jews. I think probably the majority of American Jewry will associate with my sense of Judaism more than say you know an Orthodox Jew in Crown Heights.

How real do you think the threat of anti-Semitism is when posed by groups on the Left. What do you think about recent stories for example that link Louis Farrakhan to the Women’s March?

I knew you would ask this question and I think that everywhere I go I will be asked this question. I believe that the rise of nationalist bigotry is an enormous challenge to Jews but to anybody who believes in democratic pluralism and I believe that the rise of nationalist bigotry or bigoted nationalism is reflected in enormous political movements from Washington to Warsaw to Rome to Paris. This is an international movement and while I certainly denounce Louis Farrakhan and I denounce the kind of gutter anti-Semitism that Farrakhan has expressed for 30 years, I don’t believe that he represents an international movement. I also believe that his power peaked in 1995 at the Million Man March and has been ebbing ever since.

How can Jews who disagree with members of the Left about issues surrounding Israel-Palestine become more broadly involved in these sorts of leftist liberal activists movements — it seems to be a sticking point.

Well, first of all, I’m not advocating a Leftist or liberal movement here. I believe that sticking up for democratic pluralism in American institutions should not be a question of left or right. I think the most articulate voices on this front are coming from the right. They’re coming from the Never Trumpers who are conservative and mainly Jewish. Not all but predominantly Jewish. So I want to distinguish between bigoted nationalism or nationalist hatred and conservatism. They’re not the same thing and really in fact one should be anathema to the other. And look: We can sit and argue over how the BDS movement might alienate Jews who are attracted to the resistance or to the left. But actually one of my points here is to not sit and hash over Israel versus anti-Israel policy. I’m trying to refocus Jewish attention on the threat to American pluralism. And I don’t think that BDS movement is particularly relevant to that.

Do you ever worry that you might get called out for conflicts of interest in writing this book given your capacity as the deputy bureau chief at the Times?

I have been worried I mean to extent that I have made sure that Dean Baquet, the executive editor of The New York Times, got a hold of my book when it was during galleys so he could take a look. Wherever I go I will make the point scaling up are American institutions; the Constitution and the rule of law and American law enforcement should not be considered partisan. But of course I fully expect somebody to be calling me out for this so-called dual loyalty here — for The New York Times and this cause.

It’s funny you brought up dual loyalty. Do you worry about castigating Jews for tribalistic tendencies — do you think there’s a risk of playing into anti-Semitic stereotypes that Jews have dual-allegiances or divergent priorities?

Actually, that is an excellent question. Ironically I think that in an era of tribalism and nationalism it is the tribalistic Jews that are probably are feeling most comfortable at the moment. I mean if anything I would think that that the Nationalists would welcome the tribalists. I make that point: You know in Europe the root of anti-semitism lies in Zionism, right? Whereas in the United States, the alt-right, the alt-right seems to love Israel. They’re not particularly against the idea of a Jewish nation. They just don’t want it to be in the United States.

Sam Bromer is the Forward’s culture intern. Contact him at [email protected]