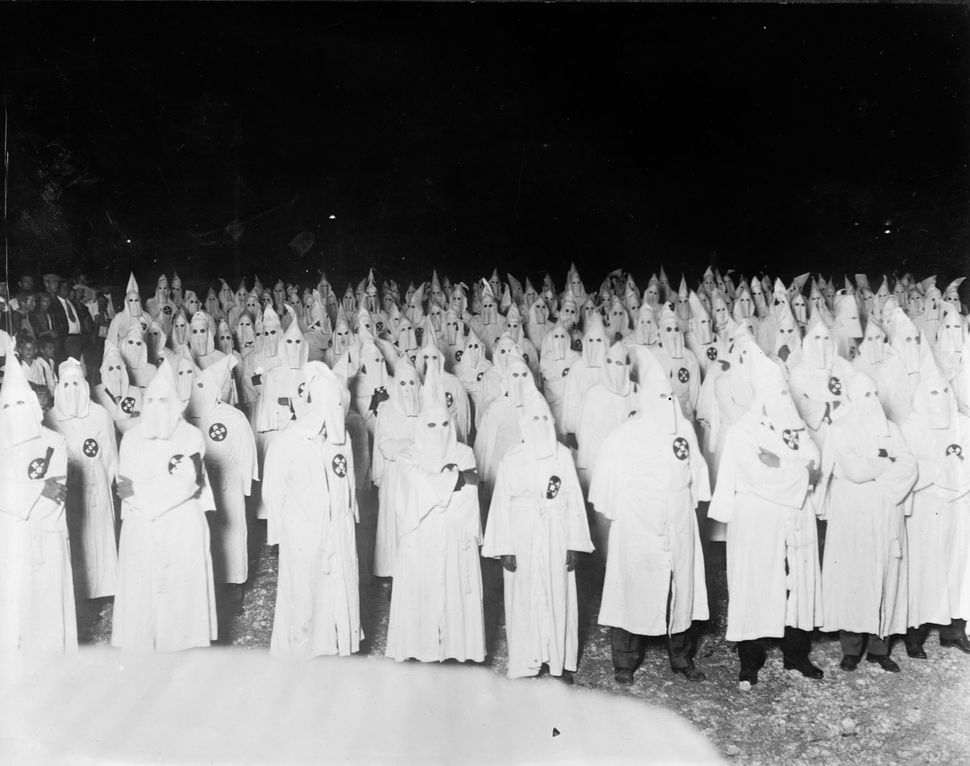 Ku Klux Kulture: America and the Klan in the 1920s
By Felix Harcourt
University of Chicago Press, 272 Pages, $45

The “alt-right” is alarming, partly because it is youthful. American conservatism often presents itself stodgily: middle-aged men wearing bow ties or affecting English accents; clean-shaven pastors (also men) delivering clean, safe sermons; stiff, suited military men frowning severely. For progressives, there is a comfort in such an old-fashioned aesthetic. The right may own the banks, the churches, the army, we quietly think to ourselves with a certain self-satisfaction, but that power is purely vestigial, nostalgic, a leftover tradition. We progressives own the future: the arts, the media, the academy, all that is new and dynamic in American culture. But because Milo Yiannopoulos and Pepe the Frog are so sophomoric, they undermine that confidence. The Twitter mobs of Gamergaters are frightening because they are childish. Their ease with technology, their rashness and vulgarity, and their immature acting-out suggest the emergence of a right-wing youth culture, a conservatism no longer retreating from popular culture.

But in “Ku Klux Kulture: America and the Klan in the 1920s,” Felix Harcourt argues that the dichotomy between right-wing reaction and popular, modern culture never really existed. The KKK of the 1920s, in his telling, was quite a bit like today’s “alt-right.” Ultra-modern, it embraced in practice (if not always in rhetoric) the new technological and cultural forms of the day: newspapers, film and radio, pulp fiction, public sports and even jazz. The KKK is often portrayed, perhaps most famously, in Richard Hofstadter’s Harper’s essay, “The Paranoid Style in American Politics,” as an atavistic rearguard, an ignorant fringe fighting a losing war against modern, urban life. Harcourt argues that the interwar KKK was far closer to the center of American culture than we usually like to admit. By broadening his focus from the KKK’s members to what Harcourt calls the “Klannish” movement surrounding it, he shows how the KKK presented a moderate, positive image to a broad audience, how it appealed, through arts, music and letters, to millions of Americans who would never have dreamed of donning a white sheet. He shows how it left an indelible imprint on 1920s art and culture, including works we still enjoy today.

This argument should, perhaps, be unsurprising. The 1920s revival of the KKK, after all, grew directly from the newest technology and cultural medium around: film. When, in 1915, the KKK burned a cross on Stone Mountain, in Georgia, the organization was all but defunct. To attract support, “Imperial Wizard” William Joseph Simmons was banking correctly on the runaway success of D.W. Griffith’s racist cinematic epic, “The Birth of a Nation,” which valorized the Reconstruction-era KKK. According to one estimate, more than 100 million people watched Griffith’s movie over the next decade. The interwar KKK was, in a sense, a new media production.

Yet two powerful historical narratives have obscured the KKK’s relation to popular culture. On the one hand, the KKK itself obviously emphasized its cultural conservatism. In copying the KKK of the 1870s, KKK leaders grounded themselves in tradition and nostalgia. And officially they opposed much popular culture as decadent, racially or religious suspicious, and immoral. The KKK burned books it deemed, as one KKK newspaper wrote, “filthy fiction” (though the KKK shared this puritanism, Harcourt points out, with “The Salvation Army, The Knights of Columbus, the Y.M.C.A and Rabbi Stephen S. Wise”). And it decried jazz as too Jewish and protested dance halls (though here, too, it found an unlikely ally in the satirist H L. Mencken, who compared jazz to the “sound of riveting” and called its listeners “tone-deaf”).

Moreover, on the other side of the culture war, Harcourt writes, midcentury histories have bequeathed to us a “comforting popular myth about the ability of American cultural heroes to defeat the evils of the Klan.” Historians like to imagine the forces of progress — cultural elites, newspapers, new media like radio and film — as uniformly arrayed against the KKK. In this telling, the 1920s KKK was vestigial and out-of-date, our national equivalent of an embarrassingly racist grandfather who can be tolerated because he can be ignored.

Against the pressure of the KKK’s self-conception and the liberal historical tradition, Harcourt marshals an impressive array of evidence that the KKK was in fact central to 1920s American popular culture. Each chapter of his book surveys a different cultural field. For instance, while some newspapers in the 1920s did publish “exposés” of the Klan, these were often pitched as politically neutral looks inside the sensationalistic, mysterious world of a secret organization, studiously avoiding taking a stand. And for good reason. The KKK organized successful boycotts of newspapers that attacked it, and strategically advertised in others, at once using the papers to legitimize itself and cannily giving editors financial incentives to be friendly. (In a bizarre twist, the KKK even retained the services of a prominent Jewish-run Chicago advertising agency.)

Furthermore, the KKK itself had numerous newspapers, which initially emerged from local chapters. While they ran racist, anti-Catholic and anti-Semitic editorials, these paperss also reprinted news articles from wire services, ran stories of local interest, and even ran crossword puzzles. The KKK used newspapers to assert that it was normal, mainstream and law-abiding, as well as to attract a broad readership of “Klannish” people — sympathize rs who were not members themselves.

Nor was it just newspapers: “Ku Klux Kulture” is full of surprising, counterintuitive links between the KKK and popular culture. While the KKK officially despised jazz as degenerate black (and Jewish) music, in practice, local KKK chapters had elaborate jazz bands that played KKK-themed parodies of popular songs (the 1923 hit “Yes! We Have No Bananas,” for instance, became “Yes! The Klan Has No Catholics”), but also just poppy standards like “Ain’t We Got Fun.” The bands performed to mass audiences, and the point was precisely to keep things light and breezy, projecting an image of the KKK as all-American, wholesome fun. White supremacist music was often eerily adjacent to jazz classics: Gennett Records recorded both early KKK phonograph records and albums by Louis Armstrong and Jelly Roll Morton. A chapter on sports contains similar surprises: Famous black boxer Jack Johnson apparently spoke about his career to a KKK chapter, while KKK baseball teams (common in local leagues) plaued peacably against black or Catholic teams.

Drawing together evidence from music, film, sports, newspapers and radio, Harcourt argues that a massive, Klannish public liked to imagine the organization as benevolent and normal (though a touch too extreme to join). These people engaged in the KKK not through membership but through a broader popular culture. Indeed, Harcourt shows how the KKK’s collapse during the 1920s resulted in part from its successful campaign to centralize the organization and rein in local chapters.

The Klannish “movement” didn’t want to answer to organization leadership. For instance, as KKK leaders saw the power of the newspapers, they moved to take control of local KKK-affiliated papers themselves and to align their content with the official organization. But circulation rates dropped rapidly. Klannish folk were happiest when they encountered the KKK in an idealized, saccharine form — and not through the official channels of the organization.

“Ku Klux Kulture” is an impressive work of archival history. Reading it, I found myself repeatedly chagrined to discover that one or another cultural form of the period was KKK inflected — even James Bond, Harcourt shows, was modeled on a Klansman busting a “group of Jewish Bolshevik spies.” And it is clearly written — a quick read. That said, the book gets dull after a while, since each chapter reproduces Harcourt’s argument for a different sphere of culture. You could shuffle the order of chapters with little discernible effect on the whole.

Still, the book is essential reading, because it shows that, rather than a radical fringe group, the 1920s KKK was a central, well-respected part of white Protestant culture. White Americans need to remind ourselves over and over of how intimately white supremacy has penetrated our daily lives, and of its lingering traces in exactly the modern popular culture we often lazily imagine as progressive, or at least neutral. Moreover, the only ones truly condemning the KKK in the 1920s were black, Jewish and Catholic newspapers — that is, oppressed people who must have often sounded shrill and extremist themselves. Liberals today not only mistakenly think that popular culture is inherently progressive; we also often hope that moderate institutions will protect us from the “alt-right”: The New York Times, the American Civil Liberties Union and even, these days, the “liberal” FBI. But we cannot harbor any illusions that the responsible center will protect us from extremism; the responsible center may well itself be Klannish.

Raphael Magarik is a doctoral candidate at the University of California, Berkeley.