Stormy Daniels Is The Quintessential Donald Trump Type — Not Jewish 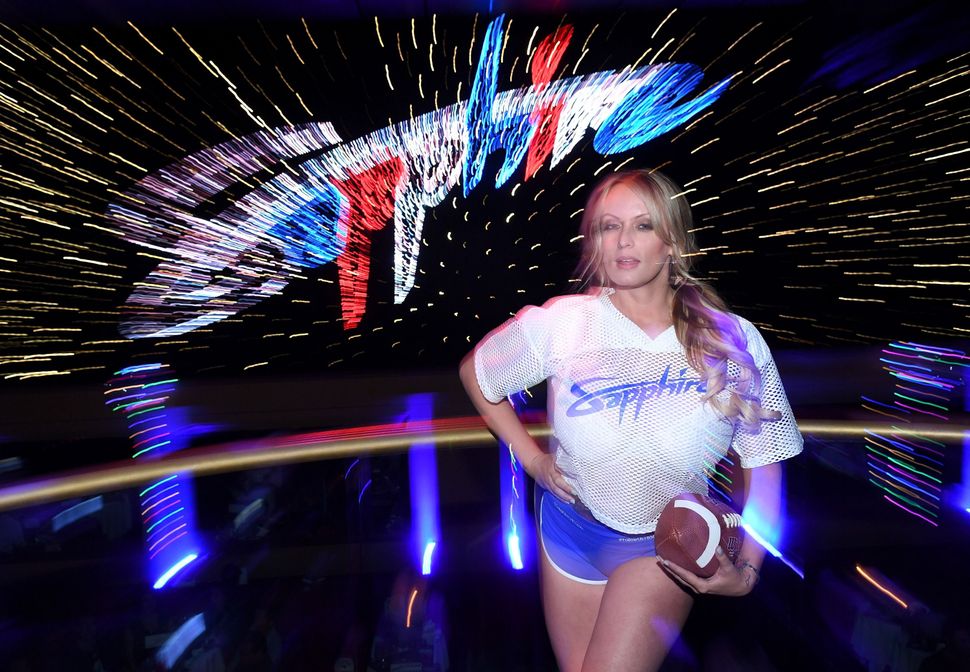 Our president continually stirs up controversy, but one thing we can all agree on is that he’s faithful — not to one woman, but to a particular type. He requires a shapely body with ample breasts, topped by a face that almost demands to be photographed, and he seems disinterested in those who are Jewish. Two of his “tchotchkes,” which is what mistresses were called by my Russian-born parents, were interviewed this week by Anderson Cooper. Comparing them, I was reminded of a joke my mother and father told: “A man sitting next to his wife in shul pointed out a woman and said, ‘Over there, the one with the mink stole. She’s Morris Klein’s tchotchke’.” After checking her out, the wife said, “Inzereh is shayner” (ours is prettier).

Former Playmate Karen McDougal and Stephanie Clifford (aka Stormy Daniels, the adult film performer) reported meeting Trump eighteen months after he’d married Melania and very soon after the birth of their son. He may have been trying to prove he could still score on the golf course. These women were not alone. Dozens of others have claimed he hit on them. Again, none of them seemed to be Jewish.

In a 1991 interview with Esquire, Trump said, “You know, it doesn’t matter what (the media) write as long as you’ve got a young and beautiful piece of ass.” Topping the list he made in 2000 of those he wanted to “bang” were Melania Knauss (then his girlfriend), former wife Ivana Trump, Princess Diana, Michelle Pfeiffer, Cameron Diaz, Julia Roberts, Gwyneth Paltrow, Diane Sawyer, Cindy Crawford and Mariah Carey. I’m not sure how many others there were, but I get the feeling this was another case of “Anyone but Hillary.”

There was one Jewish woman Trump admitted to lusting for. A conversation he had in 2004 with Howard Stern started with the shock jock saying, “By the way, your daughter.”

At 71, GROPUS, who doesn’t read and avoids self-examination, remains as unchanged as a fake plant. For him, women are a way of establishing that he’s desirable, and allow him to deny feelings of inadequacy. But, like potato chips, each is delicious for a moment, leaves him wanting more. Nothing fills the hole, not even being President of the United States.

At times, our 45th president can seem confused as well as confusing. In October of 2017, during a photo opp with senior military advisers, he made a curious comment, “Maybe it’s the calm before the storm.” When asked what he meant by “storm,” he answered, “You’ll find out.” Some feared he was hinting at an upcoming military operation, but it may have been an unconscious expression of fear that Stormy Daniels, despite having signed a non-disclosure agreement eleven days before the presidential election, might reveal things about him.

“He was like, ‘You’re smart and beautiful, and a woman to be reckoned with, and I like you,” Daniels recalled.

Trump will soon have to contend with a defamation lawsuit filed by Summer Zervos, a restaurant owner and former contestant on “The Apprentice.” Unlike the two we’ve heard from, she claimed it was non-consensual, saying he’d sexually assaulted her in 2007 and called her a liar when she spoke up about it.

We don’t know how a Jewish woman would have reacted to advances from the man who boasted, “I am the least anti-Semitic person that you’ve ever seen in your life” as he may never have tried to seduce one. (Even that could be cause for debate.) Is that because he finds them repugnant, or does he respect them more than the others? Regardless, from everything we’ve seen and heard, not being among Donald Trump’s “chosen people” surely works to a woman’s advantage. (Maybe this would be a good question for the next Pew Poll).

Stormy Daniels Is The Quintessential Donald Trump Type — Not Jewish