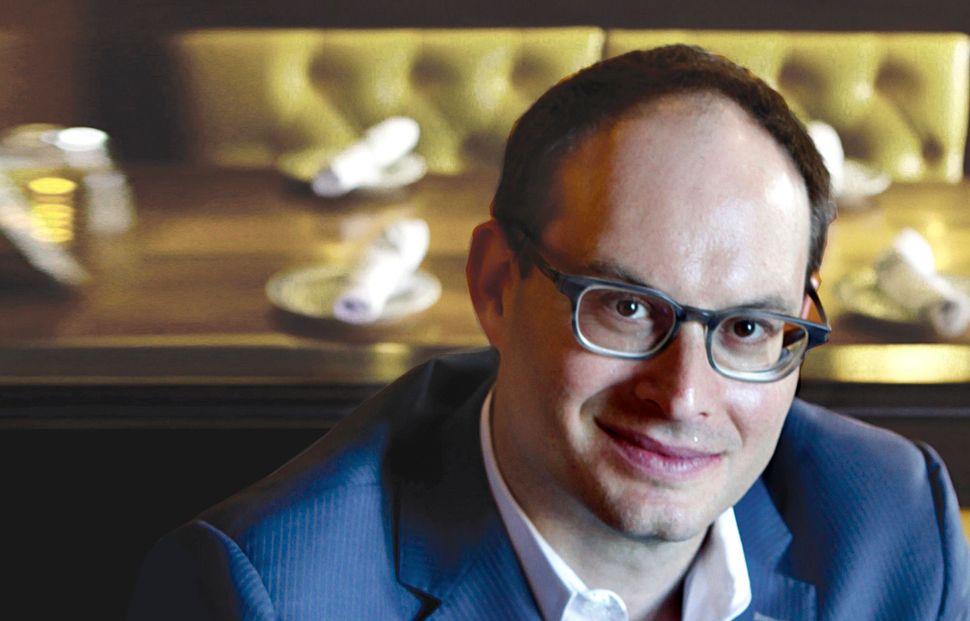 Franklin Foer’s latest book, “World Without Mind: The Existential Threat of Big Tech,” posits that technology companies’ monopoly on knowledge, as well as our collective attention span, is changing the way we think. In exchange for the efficiency and convenience provided by the “Big 4” firms — Apple, Google, Facebook and Amazon — he argues that we are pressed into conformity. By constantly interacting with these companies’ products, we have allowed them to intrude upon our inner lives, destroy contemplation and manipulate our behaviors.

The Forward’s Sam Bromer met with Foer and they spoke about how spirituality and Jewish concepts influenced “World Without Mind,” Foer’s admiration for Justice Louis Brandeis, and the steps that can be taken to combat tech’s intrusion on our collective psyches.

Sam Bromer: Your father, Bert Foer, worked in antitrust law for many years. How did he influence “World Without Mind,” if at all? Because clearly there’s a huge antitrust element to what you’re writing about.

Franklin Foer: My dad went to law school. He trained to be an antitrust lawyer. And then my grandfather, as he was dying, asked my dad to come work in the family business, which was jewelry. So he had this kind of decade-long diversion into being a small businessman. But antitrust was kind of his burning passion, as much as antitrust can be anyone’s burning passion. So, I’m sure I absolutely absorbed from him the basics of what constitutes predatory pricing and anti-competitive behavior. And like every good Jewish boy, I wanted to please my dad. So I’m sure that all that was in the back of my mind.

To what extent did your upbringing in a Jewish household affect either your views on the preciousness of literary criticism or your fear of monopolistic corporations as authoritarian?

I think that some of my skepticism and hostility to the big tech companies grows from a Jewish sense of time, and just the idea of there being a Sabbath, which is a break in the architecture of the week, where there’s a moment where you’re disconnected. And this idea that there were these sources that are trying to hijack our attention and overrun our lives, leaving no space for contemplation. I think that idea is in some ways at the core of my hostility to Facebook and Google and Apple and Amazon.

So spirituality and contemplation are sort of hand in hand in how you view the world?

Absolutely. To put the Jewish spin on it, I would say that a lot of my thinking about this rose out of my readings of Brandeis, who is the ultimate Jewish secular saint. Brandeis made a fetish of contemplation. He invented a concept of privacy and also was the great critic of monopoly.

Brandeis had a theory of intellectual privacy, and spoke of the need for protection from surveillance and interference while generating ideas and private opinions. What do you think regulators or Supreme Court members or government officials can learn from his ideas?

Well, privacy is something that everybody claims to want, but nobody articulates why. Privacy is beyond just having somebody get a peek through your window. The threat isn’t just that your space is being crowded and violated. What Brandeis was worried about was that idea that the fear of somebody looking over your shoulder as you think would start to affect your thought — that as soon as we know we have an audience, we start to bend our opinions to try to please our audience.

And so he was really worried most intensely about the disappearance of independence. And when you put it that way, what he’s arguing is that as the creep of privacy descends upon us, we become less able to be citizens because we’re less able to formulate opinions that are entirely our own.

Are you skeptical of collectivist solutions to the problems posed by these tech companies? Take, for example, unionization at media companies that are affected by technological change, like Vox or the Los Angeles Times.

I’m definitely pro-union. I think that the preservation of good journalism in some ways depends on unionization. If you look around newsrooms, it’s hard to find anybody who has any gray hairs. I’ve always wondered what happens to all these people. And part of what happens to all people is that they get pushed out because there’s not a pay structure that works for people who have families or who age in their profession.

What happens in journalism is that there is a race to the bottom, where a lot of these outlets hire young people because the product that they produce oftentimes requires less skill and less experience and less expertise. Aggregation is the simplest and cheapest type of journalism. And so I think as unions fight to exist and then as they fight to make it more possible to have an extended career in journalism, what they’re actually fighting for, at the end of the day, is a certain idea of quality.

Do you think that no matter what these companies like Facebook do, as gatekeepers they are going to have an effect on our political system? And what are the consequences of that?

Facebook is in the process right now of reckoning with its size and power. And we would have never had an internal reckoning over that had they not been accused of messing with the results of the 2016 election or if there hadn’t been this scandal about Russian interference.

I think that Facebook is just really uncomfortable “owning” its power. To be the most powerful media outlet in the world means that what you publish has tremendous impact and therefore should be held to pretty high standards. But Facebook is not built to hold its content up to high standards.

You write in the book about Facebook’s infamous lab rat-like experimentation on its users, and then also Google’s involvement in the 2012 election. Do you think that these kinds of activities should be regulated? Should these companies be bound to a code of conduct, or require more informed consent from their users?

I think we need to find some response to the problem of addiction, and I think it should be viewed as a public health problem. I’m not exactly sure whether that means posting a Surgeon General’s warning on iPhone and Facebook pages, but I do think that needs to be addressed.

Secondly, there’s the problem of privacy, and we have this gobsmacking fact that there is no comprehensive legislative regime that protects people’s privacy, which stands in stark contrast to the direction [in which] the Europeans are quickly moving. And so I think that’s the most urgent thing. And then, you’re right, they need to be held to some sort of code of conduct. And when academics conduct research on subjects, they are duty bound to a code of ethics that wires them to disclose certain manipulations or to give the subjects a sense of their involvement in experimentation, and I think it would be nice if there [could be] something akin to that for the tech companies.

Perhaps the tech companies could draw from academia, where the same sort of process requires more protections for the people involved.

At the same time, the amount of manipulation that happens at Facebook on a daily basis is endemic. Everything is being constantly tested. And that’s true at most media companies as well, where headlines are constantly being tested. And I don’t think we want to eliminate that; I don’t think we want the government trying to eliminate that. But when it comes to experiments that are designed to deliberately manipulate emotions or electoral results. I don’t want to be a prude, but manipulation of elections is a bridge too far.