Why ‘Rosemary’s Baby’ Was Really A Jewish Horror Movie 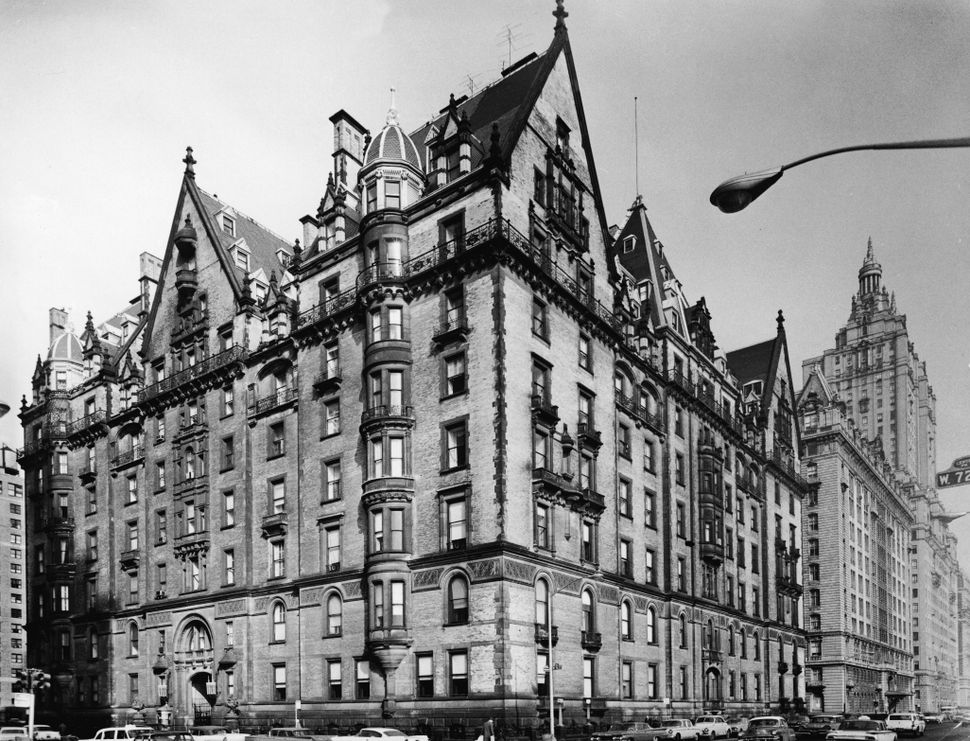 Haunted Mansion? The Dakota Building where the film of “Rosemary’s Baby” was set. Image by Getty Images

Fifty years ago, In 1968, Roman Polanski’s film “Rosemary’s Baby” was released. It helped to reinvent the modern horror genre. Other than the ethnicity of its director and the fact that it was set in Manhattan, the movie did not seem to be Jewish on the surface. Set in New York City, it tells the story of a young couple, Guy and Rosemary Woodhouse, who rent an apartment in the Bramford building. Their new neighbors, an elderly couple, Minnie and Roman Castevets take a great interest in them, particularly Guy. Rosemary becomes pregnant. On the night of conception, Rosemary imagines Satan raping her in a strange ceremony that includes the Castevets and their circle of friends. The Castevets, overjoyed by the news of Rosemary’s pregnancy, take great interest in her condition but she becomes increasingly paranoid and fearful for her baby’s life, believing they lead a coven of Satanists. The film was laced with references to Catholicism: its protagonist, Rosemary Woodhouse, is a lapsed Catholic who dreams of nuns; the Pope’s visit to New York in October 1965 is discussed, as is the Kennedy family. But something in it stirred the Christian Century to describe it as “a good Jewish practical joke on Christianity.”

Beneath the surface, they had a point. Polanski had adapted Ira Levin’s 1967 novel of the same name. The film starred Mia Farrow, whose famous pixie haircut was provided by British Jewish hairdresser, Vidal Sassoon. The Jewish actor Tony Curtis voiced the actor Donald Baumgart whose sudden blindness allows Guy to replace him in the play that sets him on the path to success. 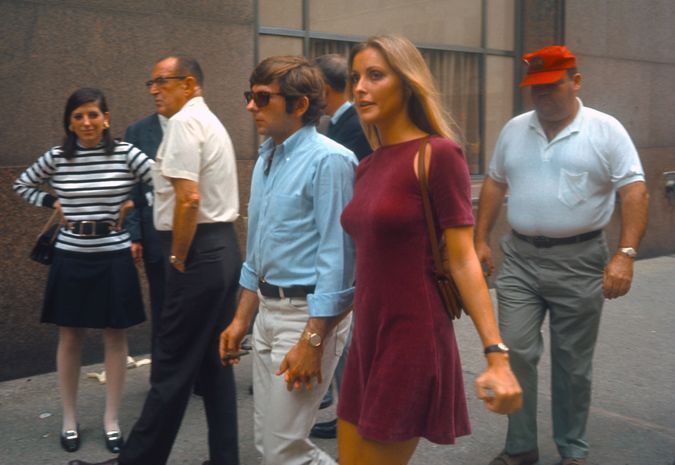 Bound For A Nightmare: Roman Polanski and wife Sharon Tate head for the set of “Rosemary’s Baby.” Image by Getty Images

Polanski removed some of the more overt ethnic elements of the novel but the way that he directed and depicted his characters make them come across as Jewish. Guy and Rosemary’s friend Hutch (Maurice Evans) tells them about the Bramford and how “World War II filled the house up again,” as if to suggest that émigrés fleeing Nazism had taken over the apartment building. This group, in seeking to procure a child for Satan, echoes age-old Judeophobic canards.

The overbearing Castevets down the hall resemble nebbishy, loud, pushy, New Yorkers. Their lack of decorum contrasts with Rosemary’s politeness and acquiescence. Roman is a wanderer, who has been “everywhere.” He has “piercing eyes,” and we learn that he has changed his name from Steven Marcato to Roman Castavets to hide his dubious origins. The fact that he and Polanski have the same name seems too significant to avoid mentioning.

In the first draft of the screenplay, written by Polanski himself, he describes Minnie as “big-nosed, with a sullen fleshy underlip. She wears pink-rimmed eye glasses on a neckchain that dips down from behind plain pearly earrings.” In the film, as played by Ruth Gordon, Minnie cooks and kibitzes, browbeating Guy and Rosemary until they cannot refuse. She nags her henpecked husband: “Just watch the carpet,” she warns him. At one point, she can be heard through the walls of the apartment shouting at Roman, “Sometimes I wonder how come you’re the leader of anything.” 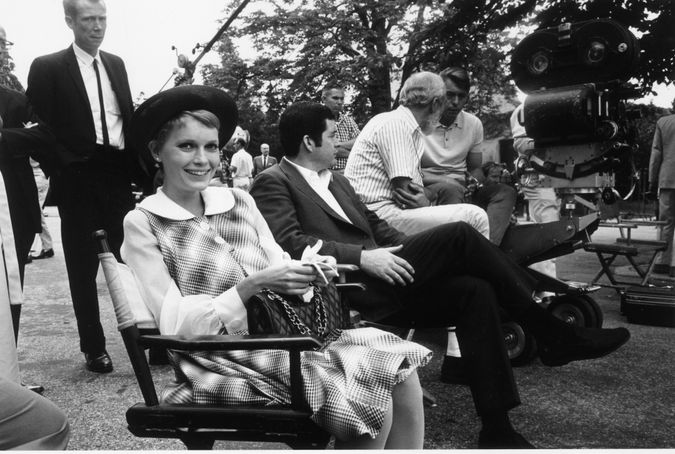 Have Pixie Cut; Will Travel: Mia Farrow on the set of “Rosemary’s Baby.” Image by Getty Images

Minnie manifests other stereotypical Jewish tics. Rosemary observes, “She’s the nosiest person I’ve ever seen. You know she actually asked the prices of things.” She wears glasses, as well as a great deal of jewelry and bangles, which clack together when she gesticulates. The first time we meet her, she has too much rouge on an overly made-up face. Ordinary conversations are conducted in a loud voice, and her body language lacks reserve. She has poor table manners, consuming her dessert with an elbow on the table, while stuffing large chunks of cake into her mouth, and aggressively chewing. She pronounces “mousse” as “mouse.” Her taste in interior decoration is vulgar. One reviewer described their apartment as “gauche … with its red walls and mahogany sofa and vomity heaps of knick knacks.”

Gordon would go on to play a series of Jewish women, including a demented, overbearing Jewish mother in “Where’s Poppa?” (1970), a fun-loving free-spirited elderly Jewish Holocaust survivor in “Harold and Maude” (1971), and Becky Rosen in “Boardwalk” (1979).

Rosemary’s obstetrician, Dr. Abraham Sapirstein, is more obviously Jewish. In the novel, unlike the other characters, his ethnicity is explicitly foregrounded: Minnie describes him as “Abe Sapirstein. A Jewish man. He delivers all the Society babies,” while Roman says, “He’s a brilliant man with all the sensitivities of his much-tormented race.” When Guy asks Rosemary if Sapirstein is in the coven, she replies, “No, I don’t think he’s one them […] He’s too intelligent.” Guy adds, “And besides, he’s Jewish.”

Although Polanski removed these lines from the film, he kept Sapirstein’s name. His surname combines two words of Hebrew and German origin respectively to mean “sapphire stone,” an item of biblical significance. Crucially, his first name is Abraham, connecting him with the biblical patriarch. Such nuances were not lost on later reviewers one of whom described him as “a sinister, bearded Jewish physician.” In Mad Magazine’s parody of the film, Sapirstein was renamed “Schlepperstein.” (In the final scene one character says, “Hail Stanley Kubrick!” When another character asks, “why ‘Hail Stanley Kubrick!’?” he responds, “Because… fortunately he had nothing to do with this ridiculous pic!”)

When Rosemary seeks a second opinion, she consults Dr. Hill who is played by the Jewish actor Charles Grodin.

Minnie introduces Rosemary to a “famous dentist” named Dr. Shand at a New Year’s party. Shand has made the chain for the charm that Minnie gave Rosemary earlier in the film. Both dentistry and jewelry were professions in which Jews enjoyed a significant presence. The name “Shand” even suggests the Yiddish term for shame (shondeh). Phil Leeds, a well-known Jewish comedian and character actor, plays Shand. 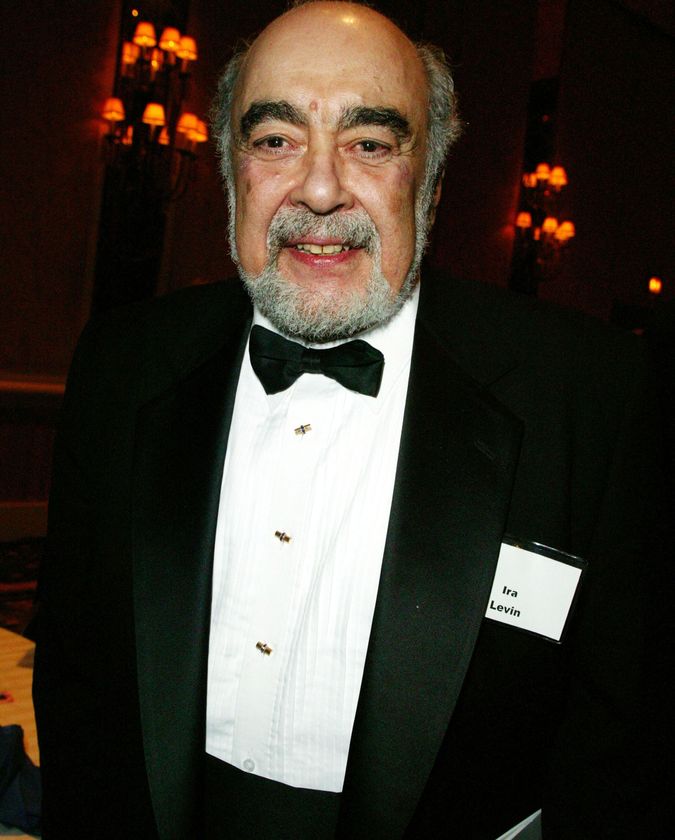 Polanski erased a line of dialogue from Levin’s book in which one of Rosemary’s friends, distraught over her appalling physical appearance at the hands of Sapirstein, compares her to a concentration camp victim: “You look like Miss Concentration Camp of 1966. Are you sure this doctor knows what he’s doing?” Nonetheless, an audience familiar with Betty Friedan’s famous comparison of the perils of domesticity to a “comfortable concentration camp” would have surely made the connection already.

In the final analysis, Polanski layered the film with allusions that are hard not to interpret as autobiographical. He had survived the Holocaust by hiding, and the claustrophobia of this traumatic childhood returns in the film’s images of a victimized woman trapped in an apartment, compelled to be quiet out of grave fear of the neighbors, staying alive or being betrayed because of whom she chooses to trust. Polanski told Playboy, “I had lived all my life like a nomad. I grew up sitting on suitcase in the midst of war.” The image of a pregnant woman being dragged away by muscular male representatives of authority has echoes in the memory of his mother, who was taken to a concentration camp when he was eight, and his father, who was taken a few months later.

Why ‘Rosemary’s Baby’ Was Really A Jewish Horror Movie