Swastika Gets You In Free To This German Theater For Hitler Play. Really? 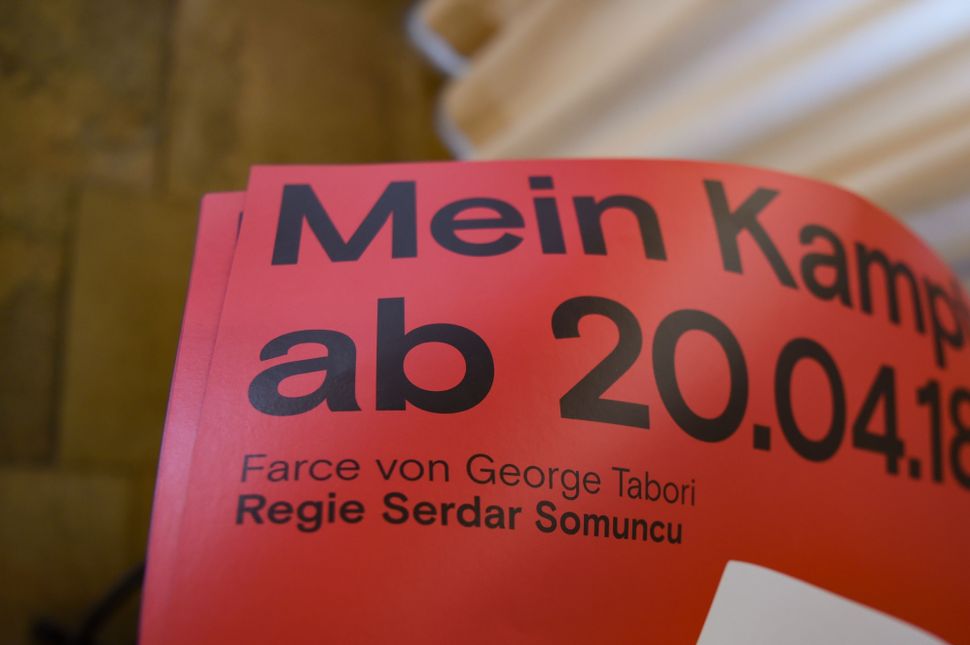 Here’s a tip: If anyone currently in hot water with a minority group tells you the last thing they want to do is offend that group, they probably have not devoted much thought to what sorts of things that group might find offensive. In 2018 alone, a California Polytechnic State University fraternity released a statement, after a member was photographed in blackface, that “it was not our intention to stir up racial tension;” Garrison Keillor responded to allegations of sexual harassment by commenting “If I am guilty of harassment, then every employee who stole a pencil is guilty of embezzlement;” and Christopher Nix, head of the German theater that offered free first-night entry to a play about Hitler’s youth to audience members who wore swastikas said, in the words of The New York Times’s Christopher F. Schuetze, that “the last thing he wanted to do was to upset Jewish people.”

Blackface is offensive for a whole host of reasons; let Vox’s Jenée Desmond-Harris explain. Garrison Keillor: Your understanding of sexual harassment is severely misguided! For Christopher Nix of Theater Konstanz and those who might tend to sympathize with his point, made to The New York Times, that “By breaking a taboo, one must bring back the debate,” here’s a breakdown of why the swastika marketing ploy — in which audience members willing to pay full price will wear yellow Stars of David — is such a bad idea.

1) It plays into anti-Semitic stereotypes

It’s possible to see how having those who wear Jewish stars pay full price could seem like a good idea: The Jewish people paid the full price of the Holocaust, while the Nazis, uh, didn’t. But think for a moment, and you see the concept’s flaws. First, if Jewishness is identified with monetary freedom, then Jewishness is implicitly associated with wealth. Yes, the miserly Jew is an anti-Semitic stereotype; so is the wealthy Jew who possesses greater means than his non-Jewish countrymen, thus able to thrive while they suffer. That latter suggestion is exacerbated by granting people wearing swastikas free admission. Doing so suggests that the swastika-wearers are economically disenfranchised, passively excusing the hatred of Jews indicated by the symbol they wear.

Sure, it makes sense that this moment in Germany’s post-war progression would be an apt one at which to remind citizens of the country’s recent history of horrific violence towards those perceived as “other.” This past fall, far-right nationalist party Alternative for Germany (AfD) won 12.6% of the vote, earning seats in the legislative Bundestag for the first time. As part of the campaign for that election, Björn Höcke, one of the party’s most public figures, made a talking point of the Berlin Holocaust Memorial; per a New York Times report, in a January 2017 speech he declared that Germans are “the only people in the world to plant a monument of shame in the heart of its capital.”

But even if Theater Konstanz’s method of taboo-breaking wasn’t itself suggestive of anti-Semitism, is it really possible that it would help those who might see wearing a swastika as no big deal to feel differently? It doesn’t seem likely. A wealth of evidence suggests that social situations that encourage participants or viewers to see an us-them divide facilitates bias. In a post-Charlottesville article published in August 2017, The Washington Post’s Sarah Kaplan and William Wan interviewed several psychologists about the causes of ongoing racism. The Yale social psychologist Jennifer Richeson offered a succinct explanation of why anti-racist behavioral norms are so important. “You have to change what is acceptable in society,” she said. “People today complain about politically correct culture, but what that does is provide a check on people’s outward attitude, which in turn influences how we think about ourselves internally. Everything we’re exposed to gives us messages about who is good and bad.”

Only those who do not feel particular antipathy toward the symbol of the swastika will consider wearing it to gain free admission to a play. If someone already thinks that displaying a swastika might not be completely unacceptable, being not only permitted to wear one but rewarded for doing so — free admission! — seems unlikely to suddenly make them conscious of the symbol’s perniciousness.

3) It will hurt Jewish people

Imagine you belong to a long-persecuted social group, half of which was wiped out through an organized effort by a tyrannical government. How long would it take for you to feel comfortable seeing the symbol of that genocide in contemporary society? What if you were seeing it in the country that had, decades ago, elected that tyrannical government? What if you couldn’t tell who, among the people around you displaying the symbol, was descended from people who had helped slaughter your ancestors?

That’s the final, enormous issue with the idea that Theater Konstanz’s swastika ploy will somehow open a necessary conversation: It cannot possibly open any productive conversation for the community that Hitler and the Nazis decimated. It will re-traumatize already deeply traumatized people. It will make them feel that their trauma is seen, by their modern countrymen, as little more than a tool to increase others’ profiles and profits. And if the experiment fails — if it makes one or two people in Konstanz a little more open to the hate propagated by the Nazis, or makes them a little more willing to deny the absolute destruction the Nazis caused — Jews will bear the cost.

Swastika Gets You In Free To This German Theater For Hitler Play. Really?