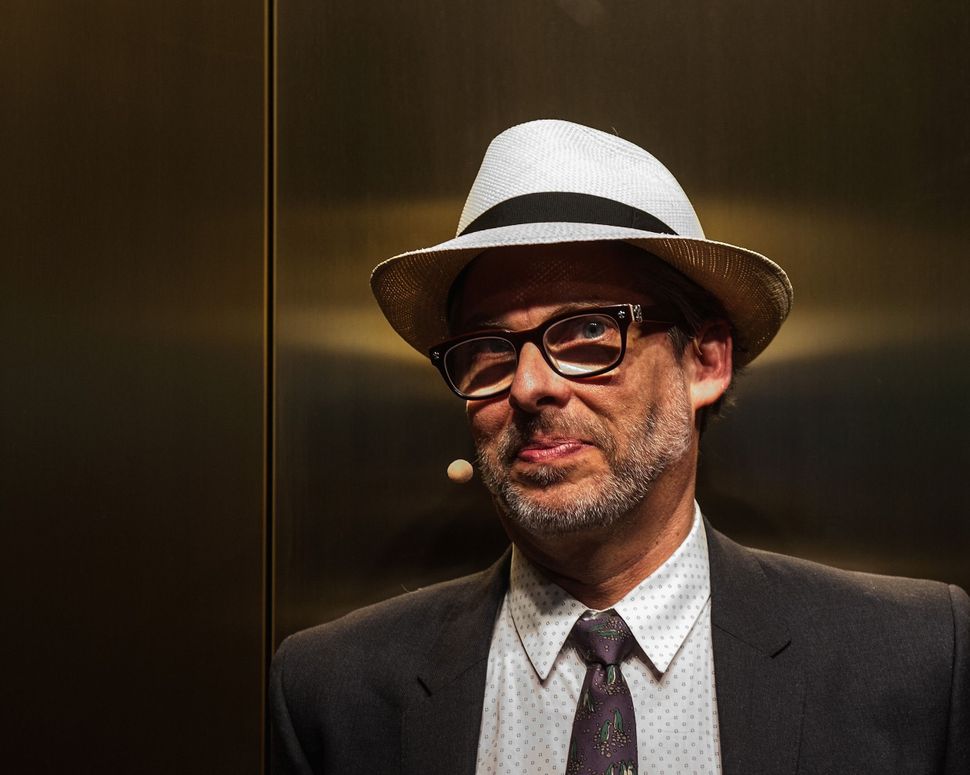 “You can write great books,” a writer, a “great man,” once told Michael Chabon at a party on the Truckee River, “or you can have kids. It’s up to you.” That’s an interesting sentiment, though I found myself wondering who this “great man” was. Raymond Carver? Tom Wolfe? Philip Roth, the greatest of men, himself? Regardless, let’s remove the suspense: Chabon chose both to have kids and to write great books. He could bring home the bacon, fry it up in the pan and never ever let us forget he’s a man.

This choice, which Chabon makes with all the wisdom of Solomon and none of the tragedy of Sophie, gets relayed in the opening essay of his new “book,” “Pops: Fatherhood in Pieces.”

I put the word “book” in quotes because, someone must say it: “Pops” is not really a book. It is a short introduction, a GQ article, a handful of Details columns, a bite-sized Atlantic piece, and a kind and moving essay about Chabon coming to terms with his elderly father that appeared earlier this year in The New Yorker.

This all takes up 127 pages, but they are small pages that hold not even 200 words each. Some novellas run longer. Some Thomas Pynchon sentences run longer. The only book I have on my shelves of equivalent size is “Howl.” But “Pops” is not “Howl.” It’s more like “Amusing, Tender, Mildly Self-Effacing Kvetch.” Chabon, if he does say so himself, is a pretty good, happy, and committed dad.

“Unlike my own father,” he writes, “I would be around for my children whenever they needed me, over breakfast, doing homework, when they learned to swim, to cook, to ride a bicycle; when they cried into their pillows. I would be present in my children’s lives. In short, my door would always be open to them.”

I met Chabon twice briefly, back in the day when I was a writer who had access to other writers. Based on that, and on the testimony of everyone I know who’s ever met him, he’s the nicest of nice guys. There’s no reason to doubt his self-assessment. The stories in his not-really-a-book are true.

Pops leads off with “Little Man,” Chabon’s now-legendary GQ article about taking his fashionista youngest son, Abe, to Paris Fashion Week. Shared on every single Facebook feed within the Blue State bubble, “Little Man” falls directly into the category of “things you want to hate but you cannot because they are so good.” The piece is not only a funny, grumpy portrayal of a bizarre cultural phenomenon, it’s also a brilliantly detailed and supremely loving portrait of a truly unique kid. It will be widely anthologized and taught like only the best nonfiction writing can.

In that piece, Chabon provides the perfect template for parenting the genetically quirky: “I didn’t need to fathom Abe or his stylistic impulses; I needed only to let him go where they took him and, for as long as he needed me, to follow along behind.” He universally expresses what every parent who cares about his or her kids wants, or at least tries, to do.

By the time I was done rereading “Little Man,” “Pops” was already one-third done. The rest of Chabon’s cultural product is essentially the same content that’s appeared in every parenting blog for the past 20 years, like Babble or Cool Mom Picks or Rad Dad, or whatever, just written more elegantly and with more semicolons. Chabon delivers some important life lessons: Don’t be racist, don’t be sexist. One of the essays is titled “Against Dickitude.” Through it all, he respects his children as individuals, even when they don’t necessarily deserve that respect. As Homer Simpson, a much less woke father than Michael Chabon, once said, “Lisa, the point of ‘Moby Dick’ is, be yourself.’”

A sort-of portrait of the Chabon family emerges: artsy, aware, kind and prosperous, a less dysfunctional, Berkeley, California-based version of “The Royal Tenenbaums,” where classical music or “All Things Considered” plays as a soundtrack to voracious novel reading. Yet there are elements missing from this picture that an actual book might have filled in; other than Abe, who gets a beautiful star turn, the Chabon kids are mysterious. His daughter remains nameless. All we know about her are a couple of her quirky fashion choices and the fact that she’s willing to watch baseball with her dad. The other sons barely get any press at all, and Chabon’s wife, the novelist Ayelet Waldman, receives close-to-zero mention.

Waldman writes her own memoirs, so her story is hardly untold. But what’s missing from “Pops” is any sense of family dynamic. Even the calmest households can barely control the chaos, especially with four kids. Where is the poop? Where is the barf and the blood? Where are the slamming doors and all the exclamation of “I hate you”? Where are the long, boring afternoons spent in the car?

Chabon’s writing displays a little angst, but there’s no sense of the low-level panic, financial, emotional or otherwise, that characterizes the lives of American families. His wisdom is very wise, and his prose quite beautiful. But I longed to see him make a mistake, for something to go terribly wrong. And no, skipping out on the Pigalle show at the Museé Picasso doesn’t count.

For a better sense of what it’s really like to be a modern writer-dad, I recommend turning to Drew Magary’s “Someone Could Get Hurt.” It’s an angry, weird and bitter book, but also, like Chabon’s, it’s the heartfelt testimony of someone who loves his many kids. When Magary writes about baseball, he doesn’t describe Chone Figgins as a “pesky little spark plug,” nor does he drop sentences like “For empathy you need to call upon the greatest of all your human inheritances, stronger than violence, able to leap the most entrenched hierarchies in a single bound.” Most important, though, Magary wrote an actual 256-page book.

Then again, the initial print run of “Pops” is 150,000 copies, which, if it sells out, will be more than enough to put Abe through Rhode Island School of Design, or wherever he decides to go to college. So who am I to judge? No one. Just a remaindered Alternadad. Maybe, as they say, size doesn’t matter. Maybe, when it comes to writing about fatherhood, Chabon really does know best.

Neal Pollack is the author of “Not Coming Soon to a Theater Near You” (Little A, 2016) and a slew of other books.