Before Sondheim And Miranda, There Was Rodgers And Hammerstein 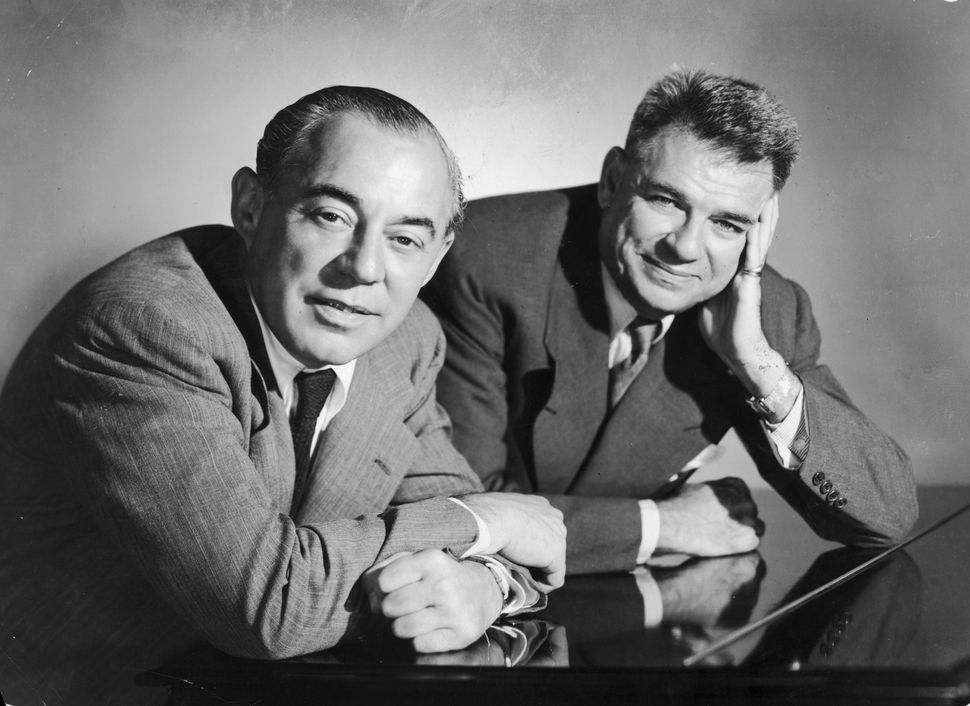 “So, twenty-four years before their collaboration revolutionized Broadway,” Purdum tells us in his engaging dual biography, “they had already taken each other’s measure and worked successfully together.”

“Something Wonderful” benefits from the cooperation of Rodgers & Hammerstein, the organization that controls the duo’s copyrights. Purdum explores the men’s occasional tensions and personal peccadilloes in a lively, sometimes gossipy narrative. Overall, however, the book remains an unabashedly admiring tribute by an admitted fan.

This sympathetic reappraisal of the duo reflects a larger cultural shift. After an undisputed reign in the 1940s and ’50s, the team was overshadowed for a while by younger, edgier talents — including Hammerstein’s surrogate son and protégé, Stephen Sondheim. “As the… tumult of the 1960s upended American society… the musicals that had once been hailed as pioneering and daring would come to be seen in some critics’ eyes as conventional, conformist, patronizing, paternalistic, retrograde,” Purdum writes.

But West End and Broadway revivals of “Oklahoma!” “Carousel,” “South Pacific,” “The King and I” and even “The Sound of Music” — accentuating the musicals’ darker, sexier and more dramatic aspects — have helped spark a renewed appreciation of Rodgers and Hammerstein.

Both Rodgers (1902–79) and Hammerstein (1895-1960) were born in New York City’s then-prosperous Harlem, the grandsons of European Jewish immigrants. (Rodgers’s original family name was Rogozinsky.) Purdum doesn’t dwell on this aspect of their story — possibly because, by both heritage and choice, their real religion was musical theater.

Hammerstein’s paternal grandfather was “the most famous theatrical producer in America, if not the world”; his father was a theater manager, and Hammerstein was stage-struck from childhood on.

Musical talent runs in the Rodgers clan, from young Richard’s mother and paternal aunt (his first piano teacher) to his daughter, Mary Rodgers (“Once Upon a Mattress”), and his grandson, Adam Guettel (“Floyd Collins,” “The Light in the Piazza”). Rodgers himself was a prodigy, composing from a very young age.

Before their collaboration, Rodgers and Hammerstein had had notable, if uneven, careers. The indisputable highlight of Hammerstein’s career was “Show Boat” (1927), composed by Jerome Kern and based on Edna Ferber’s novel about show people on the Mississippi River. It dealt with the charged subject of racial prejudice — a topic to which Hammerstein, an ardent liberal, would return. (In the 1950s, Hammerstein’s activism would inspire an FBI investigation and oblige him to defend his patriotism.)

Hart’s descent into alcoholism complicated and curtailed their partnership. (Later, Rodgers, too, would be incapacitated by depression and alcoholism.) At one point, the frustrated Rodgers spoke to Hammerstein about his troubles with Hart. Hammerstein advised Rodgers not to abandon his songwriting partner until he had to. “But if the time ever comes when he cannot function, call me,” he said. “I’ll be there.”

That time came with “Oklahoma!” (1943), adapted from the play “Green Grow the Lilacs,” which Rodgers and Hammerstein had separately admired. When Hart saw the musical, he declared, generously, “I’ve never had a better evening in my life!” Purdum calls “Oklahoma!” “as radical in its way as Lin-Manuel Miranda’s ‘Hamilton’ would be more than seventy years later.” By integrating song, dance and serious themes into its narrative, the show set a new standard for musical theater.

Parsing early drafts of Hammerstein’s lyrics, Purdum shows how skillfully he refined them. Typically, Hammerstein, the more painstaking of the partners, would present a lyric to Rodgers, who was “prolific and lightning fast.” James Michener, whose linked short stories inspired “South Pacific” (1949), said he believed the pair “could make a great musical out of three pages of the Bronx telephone directory.”

To the world, and in their tough business dealings, Rodgers and Hammerstein presented, according to Purdum, “an unbroken public front of unity, harmony, and calm.” But Purdum suggests they were not personally close, and each remained insecure about the other’s approval. “To the ends of their days,” he states in “Something Wonderful,” “each maintained that he’d never been sure whether the other really liked him.”

Their failings included a reluctance to share credit and royalties with collaborators. Josh Logan, who not only directed but co-wrote “South Pacific,” was among those shortchanged, Purdum noted.

Rodgers and Hammerstein each had wives named Dorothy, and both women were interior decorators. Hammerstein, who began an affair with his Dorothy when both were still married to others, was a generally devoted mate. Yet Purdum says he likely strayed at least once, with “a striking showgirl” stage-named Temple Texas, cast in the Rodgers and Hammerstein musical “Pipe Dream” (1955).

Rodgers, on the other hand, was “an incorrigible womanizer with a girlfriend in almost every show he produced.” Shirley Jones, who played Laurey in the film version of “Oklahoma!” said the middle-aged composer made a pass at her in his office. She turned him down and was grateful that he didn’t retaliate.

Felled by cancer, Hammerstein died first, leaving Rodgers bereft and needing the psychological balm of work. One of his later collaborators was none other than Sondheim, with whom he worked on “Do I Hear a Waltz?” (1965)

In a Newsweek interview, the acerbic Sondheim would describe Hammerstein as possessing limited talent and infinite soul — and Rodgers as having infinite talent but limited soul. It was harsh judgment. Later, in a condolence note, Sondheim would tell Rodgers’s widow that, their differences notwithstanding, “it was a privilege… merely to be around when such a composer was alive.”

Before Sondheim And Miranda, There Was Rodgers And Hammerstein