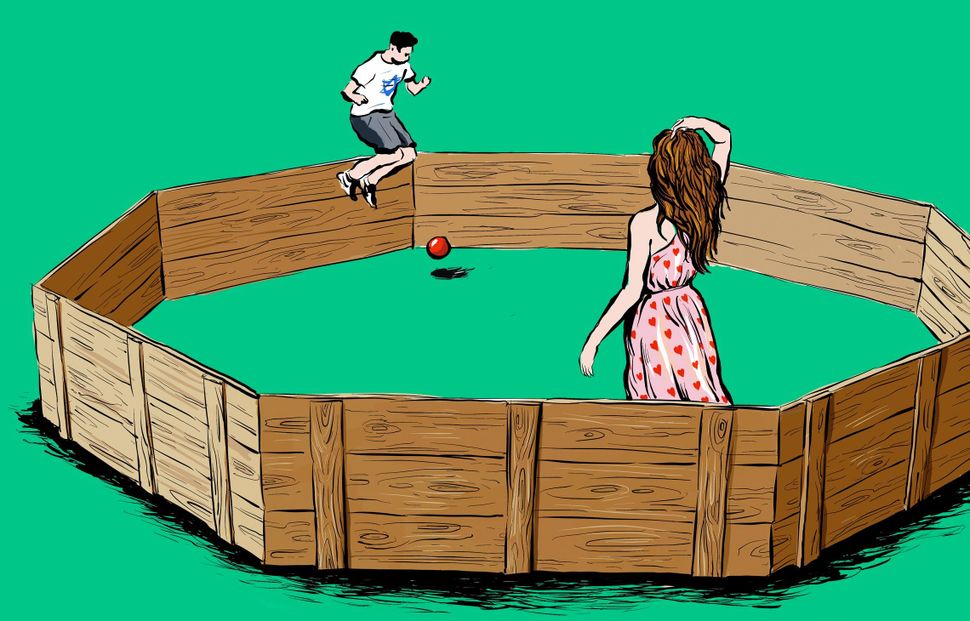 When I worked at a Jewish summer camp, I developed a philosophy of dating that I based on a Jewish sports game called gaga.

Gaga is a primitive ball-based game that takes place in a pit and involves maneuvering a rubber ball to hit other players in the shins or feet (they’ve never, ever let Jews invent sports since we made gaga). And for those who don’t know, or don’t choose to know, Jewish summer camp is the single most sexual working environment outside of the set of “The Bachelor.”

The game of gaga starts when all players are touching the walls of the pit, watching the ball bounce three times. Once the ball has bounced, players are free to leave the wall and hunch over in the pit en masse, working to slam the ball into their peers’ legs. The game of dating in any of those manufactured Jewish learning environments that are suffused with generational trauma and Sheldon Adelson money starts more or less the same way.

Some people detach themselves from the wall immediately and then dominate instantly. These people may triumph, but they’re also liable to trip over the ball and lose. So it is with those confident camp staffers who seek their dating objects during the first week of summer camp with instinct, but without information. Others may cling to the wall in hopes of outlasting the mightiest competitors, but find themselves mowed down in the path of those players.

Then there are those who hang back, waiting for the alpha players to eliminate each other. That is the best way to play gaga. If a midlevel player employs this strategy and hangs back until the proverbial dating pit is rid of the most aggressive players (read: ex-army Israelis, head lifeguards, etc.) and the weakest players (men who play ukulele during Shabbat services), she should easily be able to set her eye on a choice target and take aim.

So when I chaperoned a conference of Jewish teenagers in Washington, D.C., I assumed this theory would hold true for chaperones the way it once did at camp. My priority was my teens’ safety and learning. But just in case other chaperones were around my age, I brought a hair straightener and strategically flattering sweat attire in my duffel bag.I figure that is exactly what God would want.

With a group of synagogue teens in tow, energized by dreams of appealing to their legislators and vanquishing gun violence once and for all, my thoughts were far from romance. Out of force of habit, though, I scanned the staff at the welcome dinner. You know the old saying: Once a gaga player, always a gaga player.

Nearly all the chaperones at the hotel banquet room were married and older. But the programming was to going to be run by a group of recent college graduates with legislative experience. I zeroed in. There were just three men. The first man looked especially young. The second was not my type. And the third was striking. Just on the right side of eerily tall, wearing a mysteriously sexy fleece vest. As I watched him lead a session on bail reform, I observed that he had the charisma of an Ashkenazi Jewish Kennedy.

Like an innocent spectator in a summer camp game, I felt myself struck in the head by the gaga ball of attraction and tossed forward into a mud-filled pit. Against my will I fell prey to the hormones that perfume the air at Jewish teen events like bacteria whooshing out of the air ducts on international flights. Despite any evidence of personal connection between this person and me — along with my suspicion that every man in politics harbors the unattractive conviction that he should be the president of the United States — I developed a crush on the token hot-guy staff member at a Jewish youth event.

I’ll call this person Eagle Eye, because that is what my youth groupers hissed at me every time he walked into a room where we were studying what the Talmud might have had to say about paid family leave. Eagle Eye shepherded teens to the Jefferson Memorial and joked around with them as the setting sun glinted off the zipper on his fleece. Eagle Eye explained the definition of bump stock and the Dickey Amendment. This was attractive behavior, sure. But mostly he was just eye-catchingly tall and breathing the same conference room air that I was.

I think it was Robert Frost who once wrote, from what I’ve tasted of desire, I think I know enough of life to know that I am not the first person to walk through a Holocaust museum thinking about the opposite of mass extinction. As I walked through a model of the Warsaw ghetto, I thought about the walls that separated me from Eagle Eye. Then, I chastised myself for that insensitive, tacky thought. Then, I thought about it some more.

I stood alone in the cattle car, the exact car I had seen in childhood texts about the Holocaust, in documentaries, in my own personal nightmares of what my life would have been like had things turned out differently for my family members. The car was dark and silent — the perfect place to….

I tried to justify this total departure from sanity: By engaging in passionate fantasies of Jewish continuity at a Holocaust museum, was I not, on some level, enacting Adolf Hitler’s worst nightmare? Was I perhaps the most successful exhibit at the museum, a living testimony to the Jewish will to survive? I thought about this all the way to the Smithsonian.

How do you get people to like you? Do you stand near them? Do you try to laugh gaily when you believe you are within the range of their peripheral vision? I urge you against these two methods; I tried them both with Eagle Eye, and am here to tell you they do not work.

On the last night, Eagle Eye and I were assigned to different sessions. He didn’t seek me out at dinner. As my teens outlined speeches on gun violence prevention and immigration reform, which they would deliver the next day, my obsession took on increasingly outsized proportions.

What had started as a way to divert myself and then expanded into a modest plan to avenge Hitler had become something bigger. I was failing, I felt, both as a Jewish woman and as a role model. Watching my majority-female group of teens writing late into the night, I wondered: What kind of message was I sending to young girls if I couldn’t demonstrate agency? Like Moses and Jean Valjean before me, I wondered — mi anochi? Who am I? Am I an educator and Jewish summer camp champion with a backbone as strong as 1,000 ceramic-plated hair straighteners? Or am I just one of those meek gaga players who is dispensed with in the first seconds of the game?

As night fell over the Hyatt Regency Crystal City, I trekked up and down the hotel’s escalators, my own eagle eyes open wide. After what felt like hours (probably two to four minutes) of searching, I saw Eagle Eye standing alone. I approached. I made eye contact. I engaged him in conversation. And then I left, and thought about how, after years of summer camp and Birthright and youth group, and trips to all the Holocaust museums the world can offer, I know enough to know when a person is not interested in me. Honorably discharged from this particular game of gaga, I felt relief.

The intense Jewish communal pressure to meet a nice Jewish boy and trick him into dating you is one way that Judaism has ensured its survival. But it can also obscure a person’s other goals, like having fun, or having a meaningful experience at a Holocaust museum.

That night, I made my way through the conference center at the hotel, picking up papers and empty chip bags abandoned by teen politicos. My students’ speeches were done. Passing the dimly lit lobby on the way to the elevators, I saw a teenage couple sharing an armchair, their arms around each other. As I made an attempt to move by unnoticed, they untangled enough for one to raise her hand and, smiling, call my name. They looked so young to me, this pair of people who had traveled from out of state, attended a weekend of Jewish justice work and found each other. I lifted my hand and waved.

*“Sex and the Singer” will return with more dating disasters next month. *