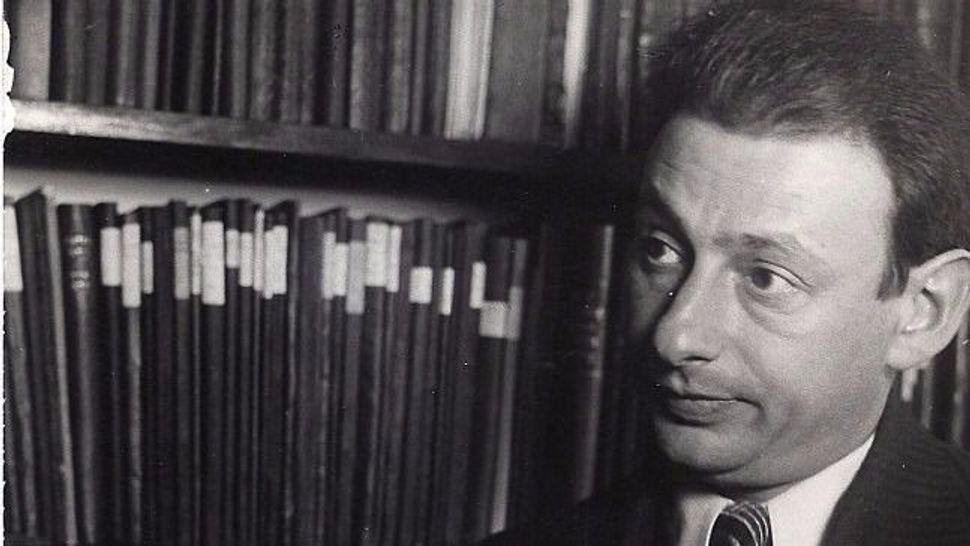 If you have ever wanted to visit the private library of a major intellectual, the place to be is Jerusalem, where Gershom Scholem’s personal library — along with the desk he wrote on — lives inside a room at the National Library of Israel. The space is homey, and feels a bit like a private reading room; some of the artwork Scholem’s wife gave him is on the walls, and there are photos and precious family possessions.

Gershom Scholem (1897–1982) was a towering scholar of Jewish mysticism. He published over 40 books and nearly 700 articles, and was part of a distinguished group of German-Jewish intellectuals who placed their faith in Zionism; Scholem immigrated to Palestine in 1923, changed his name from Gerhard to Gershom, and helped shape the intellectual scene in Israel. But he was far more than a scholar of Kabbalah or a mentor to generations of scholars in Jewish studies.

The Stanford Encyclopedia of Philosophy defines his contribution as spanning “five distinct yet connected areas”, which it lists as: “the research and analysis of kabbalistic literature spanning from late antiquity to the twentieth century; the phenomenology of mystical religion; Jewish historiography; Zionism, and the spiritual and political condition of contemporary Judaism and Jewish civilization.” Scholem maintained friendships with many intellectuals, and he even wrote poetry; a volume was translated into English and titled “The Fullness of Time.”

The index cards Scholem painstakingly prepared to create his dictionary of the Zohar are here, in a wooden card catalogue, as is the Scholem family Bible, which is encased in glass. I watched, intrigued, as scholars and eccentrics from around the world got up from their spots at the tables throughout the room to take a look at a volume from Scholem’s vast collection of books on Hasidim, comparative religion, psychology and philosophy. A few looked up and smiled at me, as if we were all residents of the same home, part of the same family. On the day I visited, there was only one woman besides me in the room; all the other researchers were male — but I was assured this was just happenstance.

Scholem’s books offer clues to his thought, and his research on subjects like Shabtai Tzvi, Jewish history’s most famous false messiah. For Scholem’s many devotees, who appear to live on every point on the spectrum between deeply religious and incurably secular, the draw is not just the books in the collection, but the handwritten notes found written in them — the marginalia Scholem left behind.

“We often find notes inside the books,” says Dr. Zvi Leshem, the Scholem Room’s curator. “I give the originals to the archives.” A former congregational rabbi who has lived in Israel since 1979, Leshem already had a PhD in Jewish philosophy and Chassidut from Bar Ilan University, when the founding director of the Scholem collection retired.

“I had not thought of being a librarian, but I checked it out and then got a library certification,” Leshem said. Today he presides over projects like the recent display of dedications to books in Scholem’s collection, in honor of his 120th birthday.

Many intellectuals and public figures gave Scholem books as gifts, and these personal dedications are a form of 20th-century Jewish intellectual history, and perhaps even the 20th century overall; everyone from Elie Wiesel to Herman Hesse gave Scholem something. And the collection is international: Hebrew and Aramaic are the most common languages in Scholem’s library, Leshem said, followed by German and English, and a lot of French. I even spied some of Scholem’s work translated into Turkish and Japanese.

All of this bounty is presided over by Leshem, who has been the curator for six and a half years. I asked him about the intriguing experience of living inside Scholem’s world, and interacting with Scholem-philes on a daily basis.

Aviya Kushner: I understand that one of the great treasures of this collection are the dedications written to Scholem — and that some were on display here recently. What can you tell us about the dedications and the languages they were written in?

Zvi Leshem: There are approximately one thousand books that have dedications to Scholem. We had two display cases packed with dedications. What’s interesting is who they are — Martin Buber. Paul Celan. Herman Hesse. Hannah Arendt. Walter Benjamin. Rabbi Saul Lieberman. [Rabbi Lieberman was also known as the Gra”sh — Gaon Rabbeinu Shaul.] All gave him their books and wrote dedications. Everyone from psychologists to philosophers gave him books. Some people wrote dramatic things — like followers of the Dada movement, who wrote in the form of a picture. 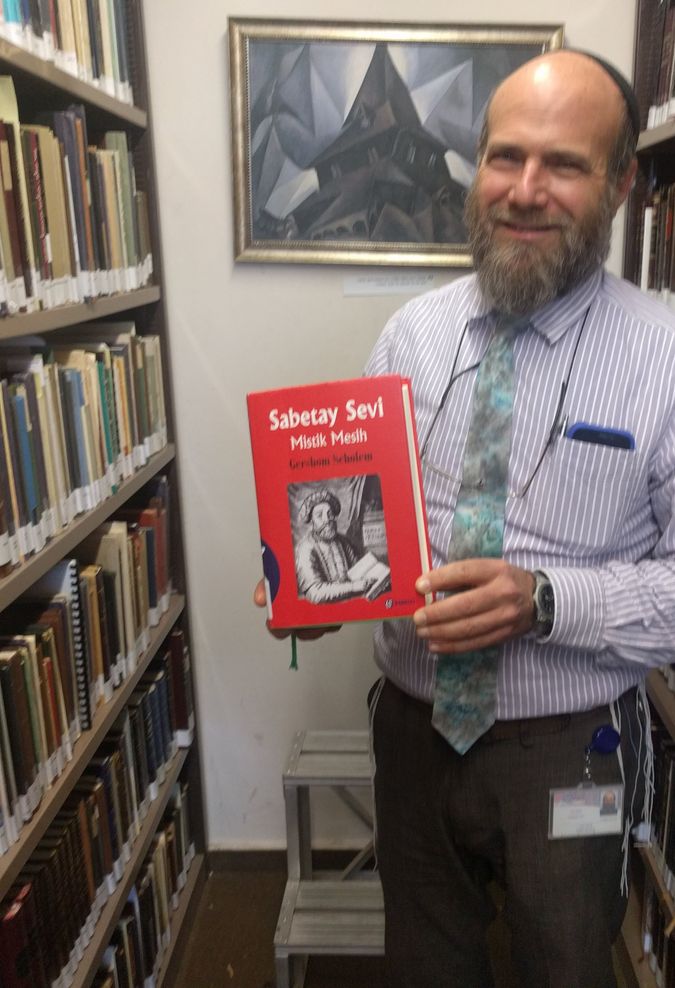 Expert On All Things Gershom: Zvi Leshem is the curator of the Sholem Room. Image by Aviya Kushner

They are in a lot of languages, and many are in several languages to make a point — mixing in a Latin phrase or some poetry. Elie Wiesel wrote him a dedication in Hebrew. Agnon, one of his closest friends, wrote many dedications. There are a few dedications from Berel Katznelson — who actually died in Scholem’s apartment.

Some dedications have real historical information, like one from Buber on ups and downs over the years or Walter Benjamin writing on fascism. Some of them are playful — “this little book will find its way into the far reaches of your Kabbalistic library.”

So the surprises are often in the dedications, and in the marginalia. Professor Daniel Abrams of Bar-Ilan University says Scholem wasn’t writing these margin comments for himself, but for us.

What has surprised you in your years working as the curator of the Scholem collection?

The Gershom Scholem I knew was a writer — I didn’t know much about him as a person. I heard him speak once in 1980 or 1981. And I didn’t know that much about his persona. Almost immediately when I get here, I was told that at an upcoming conference I had to give a lecture on Scholem as a researcher and a librarian.

I thought I needed to learn a lot more about the guy. Muki Tzur the Israeli author and historian did a long interview that has been published in English.

I felt like I got to know him a lot better through his books, his marginal notes, his dedications, and the world of Jewish intellectuals.

Other surprises include the actual books themselves. Can you give us an example?

Who uses the Scholem Library? Is it all Scholem experts? And what is the advantage of this room for those who know nothing about Scholem?

Some people who come here don’t know anything about Kabbalah or Hebrew, but they are writing about Scholem’s relationships with people. This year two full-length biographies came out in English. Thirty years after he died he is still a towering figure.

For non-experts, one advantage is being able to see some of the rare books and dedications. Anyone in the humanities or Jewish studies or religious studies can find something here. For example, a visiting professor of Eastern religions, from China, came to the library and he was here in this room every day.

What are the advantages of the library for people who do know Scholem well?

All the books are in one room. They probably have all those books at Harvard but you’ll never find them. It’s arranged the same way it was arranged in Scholem’s house: Kabbalah, primary sources, research. And the people who come here are an amazing collection of academics, scholars, people interested in Scholem and those called “Hareidi researchers.”

I do a lot of shidduchim here — not for marriage but for information. I say, “let’s go talk to that guy.”

The readers are very much part of the library. There are people here from all over the world, especially in the summer when academics come. For experts, there is a fantastic collection of rare books and first editions, and hundreds of photostats of Kabbalistic manuscripts.

This is the place where I can open up ten manuscripts of the Zohar and compare them on the table.

Tell me about the dictionary of the Zohar that Scholem put together.

The Zohar was written in late-Aramaic in 13th-century Spain. By that time the language hadn’t been spoken for hundreds of years. Scholem wrote 7000 index cards. They are now online, so it more user-friendly. He made the cards mostly for his own use — and let other people use them.

** I can’t leave without hearing the story of how the Scholem family Bible got here. I understand that a visiting rabbi from Israel happened to see it in someone’s living room in Germany, and decades later it made it here, to Jerusalem.**

Five years ago, I got a phone call from Germany and someone said I want to talk to you about the gift of the Scholem Bible. Twenty years ago, the voice said, we were asked by the Scholem library to donate this book.

A rabbi from Israel who was on shlichut in Germany saw it. The family had bought it in a used bookstore. I suspect that his mother either gave it to a Christian library or a secondhand store. You can see the words Gerhard Scholem, and you see his middle name, Arthur.

It arrived on what happened to be the same day when the German ambassador to Israel visited Israel.

I know that the National Library is in the midst of a major transformation, and a major construction project. What will happen to the Scholem collection?

In the new building there will be a very beautiful space — windows on all four sides. We will maintain its character and heimishe atmosphere, as opposed to a massive reading room.

Aviya Kushner is The Forward’s language columnist and the author of The Grammar of God. (Spiegel & Grau). Follow her on Twitter @AviyaKushner