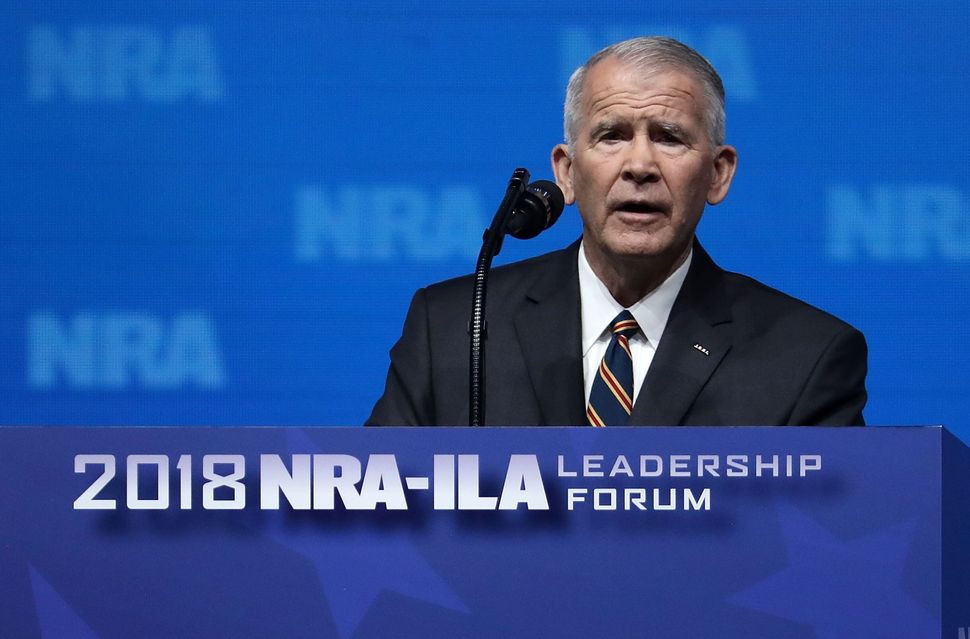 In selecting Oliver North to lead the powerful pro-gun lobby, the National Rifle Association (NRA) is getting more than just the mastermind of the Iran-Contra Affair and a convicted felon who lied to Congress. They’re also getting a rabidly pro-Israel Christian evangelist who for decades has been outing what he claims are anti-Semites in the U.S. government and chiding Palestinian leaders for not renouncing terrorism.

Just this past January, North led a 10-day trip to Israel for Freedom Alliance’s Holy Land Tour and Security Conference. “Together, we will visit Nazareth, the Jordan River, and the City of David; we’ll dine on the Sea of Galilee; and travel to places that make the words of the Old & New Testaments come alive,” wrote North in a letter to potential participants, posted on the website of Inspiration Cruises & Tours, which describes itself as a “Christian-owned and led company [that] turn[s] vacations into life-changing encounters in the best places on earth…. your opportunity to get away with God. … The privilege of serving the body of Christ and expanding His Kingdom on earth is what drives us to achieve ever-increasing levels of excellence.” The tour, North continued, would “explore the special relationship between the United States and Israel with informative seminars led by Israeli military, political and business leaders.” A “special relationship” in which North at one time was a key player. But I get ahead of myself.

North’s love affair with Israel is nothing new. At a 1989 Roundtable Prayer Breakfast for Israel at the National Religious Broadcasters convention sponsored by three Christian groups — the Religious Roundtable, the Brotherhood Forest of Israel, and Intercessors for America — North called on the Palestine Liberation Organization to condemn the murder of Israeli Olympic athletes in Munich, the Ma’alot massacre of schoolchildren, and the murder of Leon Klinghoffer on the Achille Lauro cruise ship. According to the Jewish Telegraphic Agency, North also recalled the 50th anniversary of Kristallnacht, calling it “the day in which Adolf Hitler turned loose his jack-booted thugs to start one of the most murderous atrocities known to man.”

In his 1991 book “Under Fire,” North wrote that the U.S. government contained an “ingrained streak of anti-Semitism” and that the State Department exhibited a “long-standing and barely hidden pro-Arab tilt.” He also took on former Defense Secretary Casper Weinberger, writing that he “seemed to go out of his way to oppose Israel on any issue and to blame the Israelis for every problem in the Middle East,” attributing Weinberger’s antipathy toward the Jewish state to the latter’s “sensitivity about his own Jewish ancestry.”

But North of course is and always will be best known for his somewhat bizarre wheeling and dealing whereby this military assistant at the National Security Council oversaw arms sales to Ayatollah Khomeini-era Iran — he of “America is the Great Satan” — and used the profits to fund the anti-Sandinista campaign in Nicaragua by the Contras, in defiance of a Congressional ban on such assistance. In subsequent testimony before Congress, North himself termed the deal “a neat idea.”

In fact, the Iran-Contra deal was an outgrowth of secret arms sales of American weapons to Iran by Israel. Iran sought the weapons for its burgeoning struggle against Iraq, and in 1985 Iranian arms merchant Manucher Ghorbanifar and National Security Council consultant Michael Ledeen — the latter working for National Security Adviser Robert McFarlane — came a-calling in Washington. President Reagan himself approved the sales, funneled through Israel — which itself viewed this deal-with-the-presumptive-devil in the same “Godfather”-like terms held by the U.S., in which the enemy of my enemy is my friend — over the objections of Defense Secretary Caspar Weinberger and Secretary of State George Shultz. Saudi billionaire oil and arms trader Adnan Khashoggi also played a role in financing the effort. All of those involved became household names when the deal became public knowledge (via a report in a Lebanese newspaper) and an investigation was launched by a Joint House-Senate Committee, whose televised hearings were the biggest show out of Washington since Watergate a decade or so earlier. (Some termed the affair “Irangate.”)

There are those, however, who view North as having betrayed Israel with his plan to use the profits to fund the Contras. In order to do so, North removed Israel as the middleman in selling arms to Iran. Israel paid North back by cooperating with the congressional investigation, which resulted in the indictment of 14 administration officials (including Weinberger) and conviction of 11, including North. Of these, all either had their convictions reversed on appeal (mostly due to technicalities) or were pardoned by George H.W. Bush in the waning days of his presidency.

Some also see more than a modicum of irony in having North take the helm of an organization that pledges fealty to the U.S. Constitution, albeit mostly focused on one particular amendment to the founding organizational document of the United States.

“For an organization so concerned with law and order, picking a new leader who admitted that he lied to Congress is a truly remarkable decision,” said Avery Gardiner, co-president of the Brady Campaign to Prevent Gun Violence. The gun lobby, continued Gardiner, “will be led by a man whose own concealed carry permit was revoked because he was ‘not of good character.’”