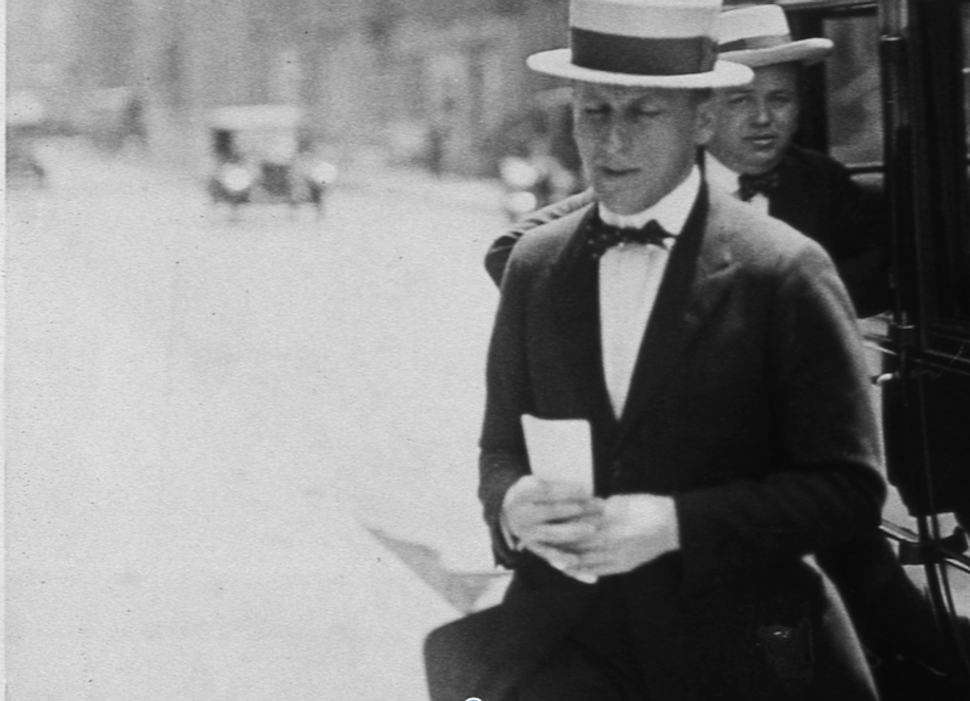 The Supreme Court has overturned a federal ban on state-authorized gambling on sporting events, thus reopening the door to a profession that has long boasted its fair share of Jewish participants, some legendary in the field.

The likes of Meyer Lansky and Bugsy Siegel, of course, were instrumental in organizing gambling on a host of activities — pretty much anything you could place a bet on — especially on cards and games of chance in casinos in Cuba, Miami, and Las Vegas. The characters of Hyman Roth and Moe Greene in “The Godfather” films were loosely based on Lansky and Siegel, respectively.

Arnold “The Brain” Rothstein was probably the most notorious Jewish sports gambler of all time. He first focused on horse racing, in which his wide net of informants trading inside information helped establish him as a kingpin of organized crime in the early 20th century, making him a millionaire by age 30. And though it’s still a matter of some controversy, Rothstein is generally credited with one of the biggest sports bets of all time: the so-called Black Sox Scandal of 1919, in which someone — Rothstein? — paid the Chicago White Sox to deliberately lose the World Series to the Cincinnati Reds. The fix paid off handsomely to those who bet on the Reds, including Rothstein himself, who nonetheless was never indicted for the crime.

But Rothstein was just one of a long line of Jewish sports gamblers, dating back at least as far as Dr. Robert Underwood, who, according to the New York Times, is considered the founding father of modern bookies. “Doc Underwood, as all gamblers knew him,” wrote The Times, “sold his first pool in 1855 in New Orleans on a match race between the horses Lexington and LeCompte and later ran a betting operation out of the basement of the United States Hotel in Saratoga Springs, N.Y.” According to Leonard Jay Greenspoon’s “Jews in the Gym: Judaism, Sports, and Athletics,” Underwood was followed in the profession in subsequent years by several prominent members of the tribe, including Sol Lichtenstein, Abe Levy and Kid Weller.

Leaping ahead by a century of so, in 1984, gambling was considered such a problem in the Jewish community in New York City that the Federation of Jewish Philanthropies formed a Task Force on Compulsive Gambling. The New York Times’s report on the proceedings quoted Rabbi Marc Gellman of Temple Beth Torah in Dix Hills, L.I., thusly: “’It is in the texts of our tradition and in our history. The Talmud refers to gamblers with a Greek word meaning ‘players with dice.’ In the 15th century cards became popular among Jewish communities of medieval Europe, and tennis became a betting game. By the 18th century they were heavily involved in various forms of lotteries.”

Just this past April, self-described “Jew turned evangelical Christian” Wayne Allyn Root, a conservative talk show host, presciently hailed the expected Supreme Court ruling in a column in the Las Vegas Review-Journal, in which he fondly recalled his days working with perhaps the most famous sports gambler of modern times, Jimmy “The Greek” Snyder.

In the past few years, Robert Gorodetsky, a 20-something college dropout from Chicago, has become the most prominent sports gambler in Las Vegas. Profiled in USA Today as “the future face of sports gambling,” Gorodetsky who has ostentatiously gambled with Jewish rapper Drake and New York Giants wide receiver Odell Beckham Jr. — has been touted as the most likely sports gambler to become a billionaire in the U.S. once betting on sports is legalized outside of Nevada. It looks like with the new Supreme Court ruling, Gorodetsky may have just scored big-time.

Gorodetsky, however, won’t be the first Jewish sports gambler to have achieved membership in the billionaires’ club. That honor goes to Englishman Tony Bloom, who was featured in a lengthy profile by Business Insider in 2016. Bloom, a veteran gambler who owns the Brighton & Hove Albion Football Club (that’s soccer to you Americans), made millions setting up an online bookmaker and poker websites in the 2000s, and his net worth is estimated by some to now run into the billions. Bloom now owns Starlizard, “a company that treats gambling the way hedge funds treat stocks,” acting “more like a betting adviser than a bookmaker — it doesn’t actually take bets.”

As for whether or not any of this activity is kosher, that’s up for interpretation. The closest line in scripture dealing with gambling is probably this one from Proverbs 13:11: “Wealth gotten by vanity shall be diminished, but he who gathers by hand will increase.”