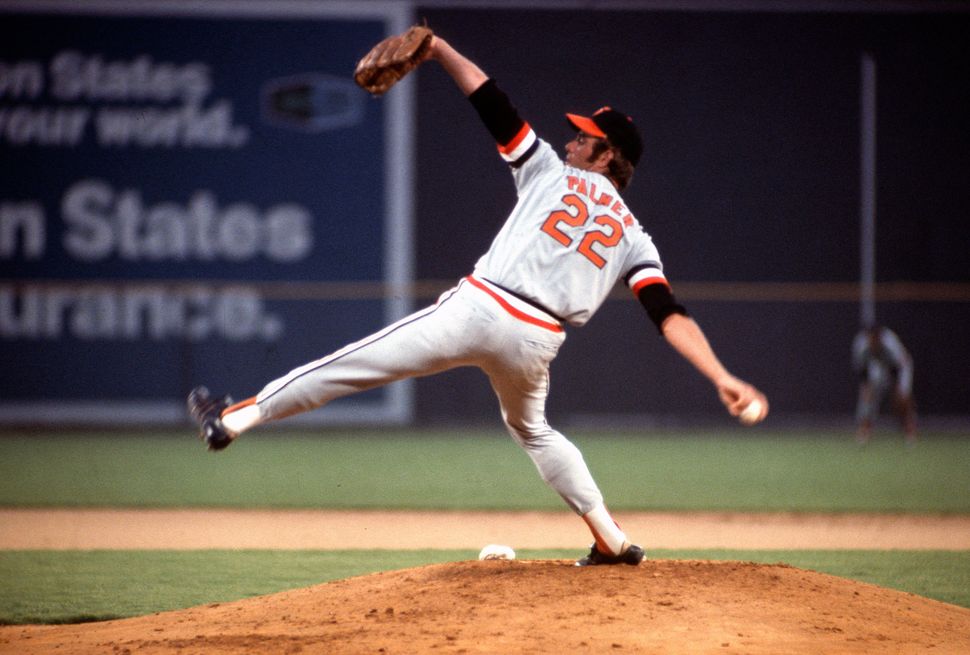 Hall of Fame pitcher Jim Palmer recently had his lifelong belief that he may have been related to the Kennedys of Camelot dashed, according to a Washington Post story recounting the investigation into the adoptee’s birth origins. The article, however, also revealed the extent of Palmer’s heretofore overlooked Jewish background.

Palmer, the winningest pitcher of the 1970s — who went on to a career as an underwear model and sportscaster — was adopted at birth in 1945 by Moe and Polly Kiger Wiesen of New York City. In his first few years, James Alvin Wiesen, as he was then known, lived in a luxury apartment on Park Avenue, before his parents moved him and his sister, who was adopted around the same time, to the more verdant territory of Westchester County, where the young Jim first learned to throw a baseball.

Tragedy struck when Palmer’s father — who made his fortune in the city’s Jewish-dominated garment industry — died of a heart attack when Jim was just nine years old. His mother, who was Catholic, moved her children to Beverly Hills, Calif., where in short order she met a character actor named Max Palmer, who played roles on such TV shows as “Dragnet,” “Highway Patrol” and “Playhouse 90,” and they married the following year. Palmer adopted her children, and thus James Wiesen became Jim Palmer.

Young Jim settled into his new life just fine. Just a few years after he made the move from New York City to Southern California, the Brooklyn Dodgers followed. Even though he was primarily a New York Yankees fan, the Dodgers’ 1958 move paralleled his own. He soon became a partisan of the Los Angeles Dodgers, and their star pitcher, Sandy Koufax, became the aspiring young pitcher’s hero. Little did Palmer know then that just eight years later, his path would cross Koufax’s in a historic game.

In 1966, in only his second year in the major leagues, Palmer — who spent his entire career in baseball pitching for the Baltimore Orioles — found himself facing off against his hometown Dodgers in the World Series. Palmer shut out the defending world champions against Koufax in the second game, and the underdog Orioles went on to shock the world by taking the series four straight. As it turned out, that second game, when Palmer went up against his hero Koufax, turned out to be the last one ever pitched by arguably the greatest Jewish athlete of all time.

Incidentally, in those years, Palmer had a teammate in the bullpen named Moe Drabowsky, who was born Miroslav Drabowski in Ozanna, a village in southern Poland. The Drabowskis escaped Poland in advance of Hitler’s invading armies, and the Jewish family settled in Windsor, Conn., just north of Hartford. In Palmer’s memoir, “Nine Innings to Success,” he lovingly described Drabowsky as a prankster who liked to put snakes in his teammates’ lockers and who earned the title “King of the Hotfoot” for good reason.

Aided by the latest in genealogical tools, including DNA samples, the recent investigation into Palmer’s origins, conducted in large part by his wife, Susan, solved multiple mysteries that Palmer himself never cared to look into; he was happy just to fantasize about his Camelot connection. The 72-year-old Palmer was indeed registered as “Baby Boy Kennedy” at birth, perhaps explaining his seemingly lifelong obsession with only being one degree of separation from the White House.

In fact, Palmer’s birth mother was a 37-year-old Irish immigrant named Mary Ann Moroney. Having given birth to Palmer out of wedlock — his biological father was a well-known married carouser named Michael Joseph Geheran — Moroney took the name Kennedy from her sister, who had married a man named Kennedy (who was no relation to those Kennedys, either.)

Interestingly enough, Moroney worked as a maid for a prominent garment industry family named Feinstein. While it can’t be proven, it seems likely that the Feinsteins stepped in and helped find a place for Moroney’s baby with their business acquaintances from the rag trade, the childless Wiesens.

Palmer has always been surrounded by controversy. Those Jockey ads he posed for in the late 1970s were groundbreaking in more than one way and raised plenty of eyebrows among his teammates. And in Playboy Magazine in 1983, Tom Boswell characterized Palmer thusly: “In one breath his fellow Baltimore Orioles call him a true Hall of Famer; then, in the next, denigrate him as a hypochondriac, borderline paranoiac, prima donna, and even quitter.”

Kennedy or not, Palmer did go on to be inducted into the Baseball Hall of Fame in 1990, in his first year of eligibility. It may not be the White House, but it is Cooperstown, after all.

Seth Rogovoy is a contributing editor at the Forward. His greatest memory of Jim Palmer is when the New York Mets beat him and the Orioles in the 1969 World Series.