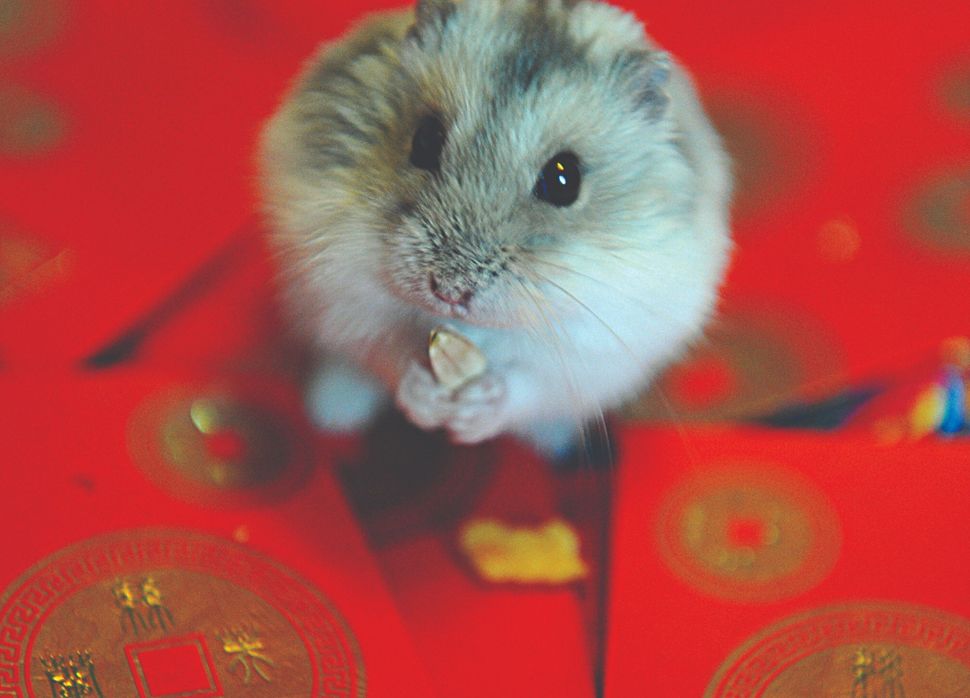 On April 12, 1930, a Zionist zoologist, his Syrian guide, a local sheikh and a group of hired laborers gathered in a wheat field outside Aleppo, Syria. They started digging. Hours passed without incident, save for the destruction of a fair portion of a local farmer’s crop. Undeterred, they continued excavating until, at last, the laborers located their target: a nest full of tiny, adorable baby hamsters. Israel Aharoni, the zoologist who prompted the search, described the moment in a diary entry: “After several hours of hard work, they succeeded in raising from a depth of 8 feet, a complete nest, nicely upholstered, with a mother and her 11 young!”

Aharoni and his team had found the Syrian hamster — or, as it is now known in elementary school classrooms throughout the world, the golden hamster. That creature, whose natural range is a mere 1,900 square miles and whose evolutionary instincts force it deep underground, is rarely found in the wild anymore. But, due to Aharoni’s efforts — and despite a few devastating mishaps that almost rendered his work futile — relatives of specimens found in this single nest now live in countries around the world.

Aharoni’s excitement probably wore off quickly; it turned out that caring for the furry creatures was a nightmare. When he placed them in a box, the mother hamster began to eat her babies, and she had to be killed. Then, as Rob Dunn writes in a 2011 Smithsonian magazine article, after Aharoni took the hamsters back to Jerusalem, five hamsters “chewed their way out of the wooden cage.” As if things weren’t bad enough, one of the four remaining hamsters proceeded to eat one of his female siblings, leaving only three. The situation seemed hopeless, but, to paraphrase Jeff Goldblum’s immortal “Jurassic Park” line, life, uh, found a way. Two of the sibling hamsters produced 150 baby hamsters, and the pet hamster was (literally) born. Aharoni had intended to breed the rodents as laboratory animals, but by 1938, they had become domestic animals in the U.S. and the U.K.

It’s unclear if Aharoni was literally digging in those fields outside Aleppo: According to Michael R. Murphy’s “History of the Golden Hamster” (1985), the zoologist’s colleague George Hess once remarked that Aharoni was “a terrible coward.” Only his “love of nature and excessive curiosity” gave him enough grit to go out in the field and explore. That curiosity led Aharoni from a shtetl in the Pale of Settlement through the Austro-Hungarian Empire, Syria, Transjordan and Palestine to the Sinai. Apart from the hamster discovery, which has become his legacy, Aharoni lived a remarkable, productive life.

Born in Vidzy, in modern-day Belarus, Aharoni (who changed his name from Aharonovitz) studied zoology and Semitic philology at the University of Prague. According to Oded Shay, an Israeli scholar, Aharoni was influenced by Mendele Mocher Sforim’s’ “Toldot ha-teva” (“History of Nature”), a Hebrew book series for young readers that discussed the fauna of Palestine and even gave the animals Hebrew names — as well as by his religiously rooted Zionism — and sought to research the living creatures of the Holy Land.

Aharoni settled in Rehovot, Palestine, in 1902. In “Memories of a Hebrew Zoologist,” a memoir he completed a few years before his death in 1946, Aharoni explained that even at such a young age, he was certain of his goals in Palestine: First, he wanted to “study … wild animals in their habitat.” Second, he wanted study these animals’ “original names,” by drawing from his vast knowledge of the Hebrew bible and from researching local “desert dwellers.”

With these objectives in mind, Aharoni began to collect rare bird specimens, and to give them scientific, Hebrew and Arabic names. According to Shay, while Aharoni traveled between Syria, Iraq and Bedouin encampments in Ottoman Palestine, he “discovered many new species, and many thought to be extinct.” (He apparently housed many of the specimens in his home; since “Psycho” hadn’t yet come out, it seems it was still socially acceptable to have a house filled with taxidermied birds.) Today, his collected specimens — including a northern bald ibis, which is now a critically endangered species in the Middle East — are housed in the Natural History Collections of the Hebrew University.

Aharoni’s life was filled with other fascinating adventures. He explored the Dead Sea and Transjordan for butterflies, which he presented to Sultan Abdul Hamid II of the Ottoman Empire. During World War II, Aharoni served as the zoologist for the Turkish army, where, according to Shay, his mission was to “direct the war against locusts,” which were a terrible burden on soldiers. Not all of Aharoni’s theories of wildlife in the Holy Land would prove to be correct — his assertion that the biblical tabernacle may have been adorned with the hide of a narwhal, or “sea-unicorn,” has not been borne out by science — but he bravely and passionately pursued his curiosity in an unfamiliar land and laid the foundations for generations of Israeli scientists. Still, for better or worse, it’s those pesky hamsters that keep his legacy alive.