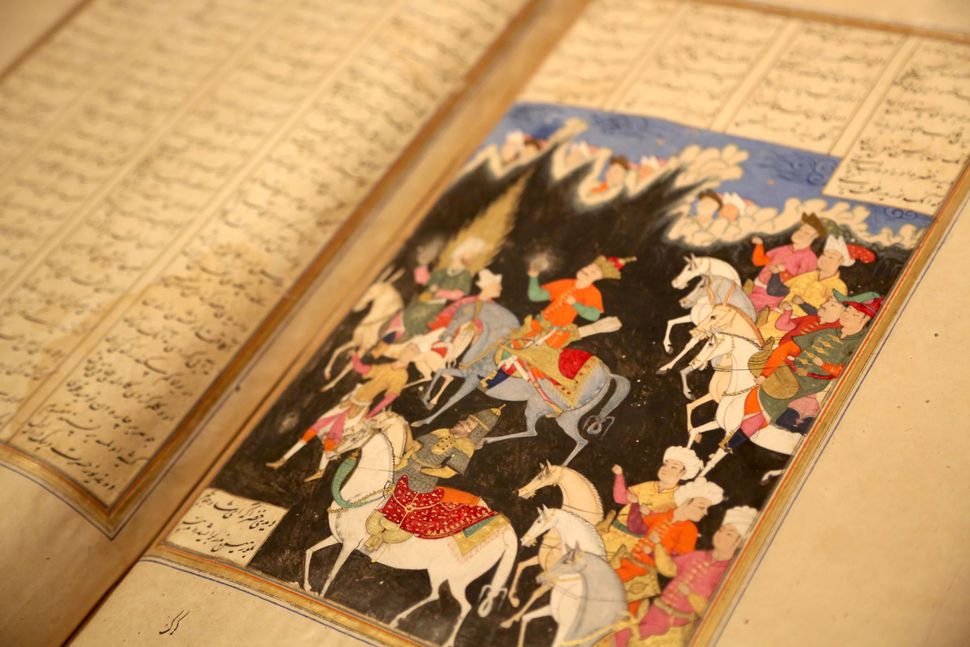 Christians in Muslim countries face violence and harassment. The same goes for Muslims in Christian countries and Israel. And, as Tom Lehrer sang, “everybody hates the Jews.”

This isn’t new information, and many before me have pointed out the irony that the three main Abrahamic religions are so often at each other’s throats. Even if the confrontations are not, as some believe, constant and apocalyptic, it’s certainly reasonable to see Christianity, Islam and Judaism as a kind of Venn diagram of grievances.

It’s reasonable but not entirely correct. As the new “Shared Sacred Sites” exhibition at three New York venues demonstrates, there is no shortage of places where followers of these religions intersect in fellowship and peace.

As its title makes self-evident, “Shared Sacred Sites” is an exploration of places of worship. It’s also about overlapping themes and figures. The exhibition bills itself as “a contemporary pilgrimage,” as it is spread across three sites in midtown Manhattan: the Stephen A. Schwarzman Building of the New York Public Library (aka, the place with the lions); the James Gallery at the CUNY Graduate Center; and the Morgan Library & Museum.

Despite the enormity of the subject matter, “Shared Sacred Sites” is charmingly modest. In the Schwarzman Building, it occupies a smallish room on the ground floor. This part of the exhibition explores the past: the “shared” city of Jerusalem and the shared scriptural figures of Abraham, Moses and Elijah.

The objects are interesting if not mind-blowing: There are medieval maps and a few of the photographer Félix Bonfils’s wonderful albumen silver prints from the 1870s and 1880s — one of the Western Wall and another of Mary’s Tomb near the Mount of Olives. I particularly enjoyed the compare-and-contrast of the Annunciation. In a pristine 16th-century Book of Hours, Mary appears calm as Gabriel breaks the news. In the gorgeously lettered 16th-century Muslim commentary on the Quran, Mary’s incredulousness is endearingly human: “How can I have a son,” she asks, “when no man has ever touched me and I am not an adulteress?”

A few blocks south of the New York Public Library and the Morgan Library & Museum, at CUNY Graduate Center’s James Gallery, the focus is more contemporary. This part of the exhibition leans heavily on the work of Manoël Pénicaud, a talented French ethnologist who studies and documents interreligious relations across Europe and the Mediterranean.

You can watch Pénicaud’s short films on “Interfaith Bridge Builders,” such as “The Last Rabbi of Crete,” an interview with Nicholas Stavroulakis, the recently deceased Greek-American preservationist of Crete’s Etz Hayyim Synagogue.

Stavroulakis speaks of his well-earned pride in creating “the only synagogue in Europe that has its doors wide open” to people of all faiths, or even no faith at all. The only criterion is the shared values of “pity and compassion for the world.”

Two spaces featured at CUNY demonstrate the sharply divergent possibilities of shared sacred sites. A short film about Hebron’s Cave of the Patriarchs documents the physical division of the holy site into discrete Muslim and Jewish spaces; watching the film, I thought about Solomon’s ruling in the of two mothers claiming the same child: Cut the baby in half.

But in Tunisia’s El Ghriba synagogue, Muslims and Jews share sacred space with apparent delight. Local tradition has it that an isolated young woman — ghriba means “isolated one” — died in a fire at the site but her body remained miraculously intact. El Ghriba is a holy figure for both Muslims and Jews; if the photographs and video are to be believed, adherents of both faiths worship in harmony, “like sisters,” says a Jewish Tunisian woman who sits arm in arm with her Muslim friend.

I should add that both the Cave of the Patriarchs and El Ghriba have seen bloody attacks by murderous fanatics: In 1994, Baruch Goldstein opened fire on Muslim worshippers at the Cave, massacring 29 and wounding 125; in 1985, a policeman guarding El Ghriba opened fire on the congregation, killing three; and in 2002, an al Qaeda suicide bomber blew himself up, killing 21. It seems division is not the only solution to violence.

For all its riches, the Morgan Library’s part of the exhibition is only one object. But what an object it is: a page from the Morgan Picture Bible, a masterpiece of Gothic art. The Bible, which was created in the 13th century for King Louis IX of France, is comprised of Biblical illuminations. In the early 17th century, it was in the possession of the Bishop of Krakow, who added Latin inscriptions. The bishop then presented it to Shah Abbas the Great, who had Persian inscriptions added. I found it thrilling to see, beneath a medieval depiction of the Binding of Isaac, neat Gothic lines sandwiched between meticulous Hebrew letters and sinuous Arabic script.

Clearly, the exhibit is intended to demonstrate that there is a long history of parallel worship and coexistence and that it hasn’t entirely disappeared from the Earth. Of course, many, if not all, of these ancient sites have seen violence at one time or another. But it’s interesting to note that the tension de-escalates the farther one gets from the Middle East. What this suggests, I think, is less about Israel than about the heightened feelings evinced by the importance of the sites.

“Shared Sacred Sites” is part of a larger scholarly effort to document and better understand such places of mutual holiness. I highly recommend that you put aside a little time for the exhibition. While viewing and thinking about the exhibit, I felt an unfamiliar but not unpleasant emotion; it took me a few minutes to recognize it as optimism.

Gordon Haber is the author of the short story collection ‘Uggs for Gaza.’