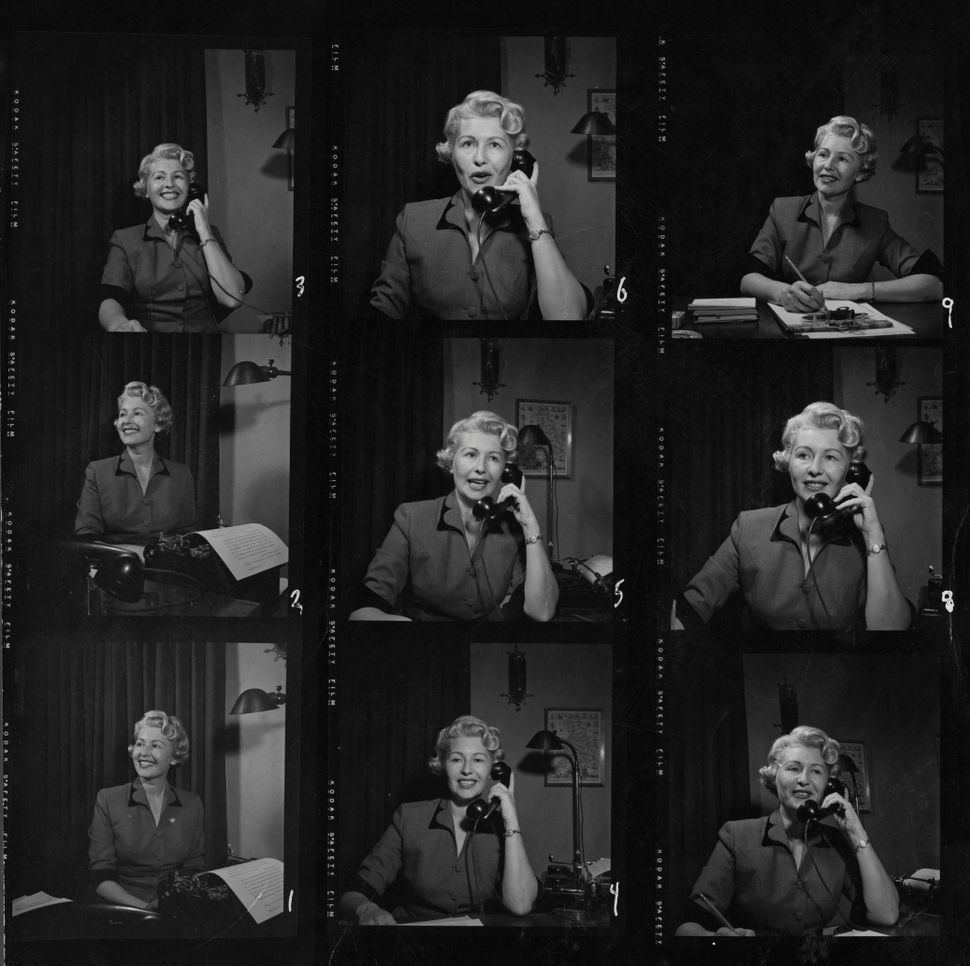 Sheilah Graham, longtime Hollywood gossip columnist and F. Scott Fitzgerald’s lover and muse, was delighted to share her personal history, especially its romantic highlights. She wrote no fewer than 10 tell-alls. But while Graham earned her living by exposing the secrets and foibles of others, one fact you won’t find in her autobiographical work is that she was Jewish. Were you to believe “Beloved Infidel,” Graham’s bestselling first memoir, published in 1958, or see the movie inspired by the book, starring Deborah Kerr and Gregory Peck, you’d never guess that the star with the plummy British accent was the daughter of impoverished Ukrainian Jews who moved to England to escape pogroms.

Lily’s father, Louis Shiel, a tailor, died during a trip to Berlin when she was a baby, forcing her mother to try to support five children by cleaning public lavatories. Eventually, Rebecca Shiel had no choice but to send Lily and one of her sons to live at the Jews’ Hospital and Orphan Asylum. Started in 1795 by financiers Abraham and Benjamin Goldsmid, the institution served the London Jewish community for generations. During Lily’s stay — 1910 to 1920 — its sprawling Victorian building in Norwood, in south London, housed and educated more than 200 Jewish children. A substantial number of them had living but destitute parents The orphanage offered an adequate grounding in standard academic subjects, as well as Hebrew and Jewish history. Overall conditions, however, were borderline Dickensian, with paltry meals and regular head shavings to avoid lice — and more easily spot runaways.

At the age of 14, Lily, a promising student was yanked out of the institution in order to nurse her mother, who was dying of cancer. This sudden departure dashed her dreams of receiving a diploma and becoming a governess or stenographer, both reasonable goals for a bright, educated Jewish girl who needed to earn an income. After Rebecca Shiel’s death, Lily had a short, sour stint as a housemaid, then found a job demonstrating toothbrushes: Thanks to the orphanage’s dental exams and abstaining from sweets, Lily’s teeth were in show-off condition. This job financed a move to a tiny flat in the more respectable West End of London. Along the way, she cut all ties to her family, her neighborhood and Judaism, and began a process of reinvention that lasted a lifetime.

Considering how young and alone Lily was when she struck out on her own, her abandonment of Jewish roots isn’t hard to understand. Judaism represented part of a package that included poverty, mistreatment in a squalid orphanage and the sense of being at the bottom of the heap in British society. By the early 20th century, as many as 150,000 Jews — mostly poor and disadvantaged — had emigrated from Eastern Europe to settle in Britain, primarily in East London. “Anti-Semitism has always been a strong current in England,” Rabbi David Teutsch, Wiener Professor Emeritus of the Reconstructionist Rabbinical College, has observed. The Jews were, after all, expelled from England in 1290 and didn’t return until the end of the Middle Ages; even today, accusations of anti-Semitism haunt the Labour Party, the traditional political home of British Jews. In Sheilah Graham’s time, victimization of Jews took several forms: “genteel, upper-class anti-Semitism; rough street prejudice; and virulent, active anti-Semitism,” Teutsch added.

“During the 1920s and 1930s cultural practices of anti-Semitism were fairly widespread and gained traction among the population,” observed Elizabeth Provost, associate professor of history at Grinnell College. “In the 20s anti-Semitism tended to be attached to conspiratorial theories and anti-Communist fears born of the war and the Russian Revolution, xenophobia, and Zionism.” Debate leading to the Balfour Declaration in 1926 raised the stake for animosity. There was a sense that Zionism invited the accusation of dual loyalties.

“By the 1930s, anti-Semitism was shaped more by the fascist and National Socialist sympathies that gained currency in Britain under the leadership of Oswald Mosley,” Provost added. “Jews faced informal discrimination everywhere: in housing, the workplace, school admissions, hotel and restaurant service and club membership. Representations of the crafty and predatory ‘Shylock’ were common in popular media, and the East End” — where Lily lived — “was the site of the most intense and symbolic anti-Semitic confrontations.”

Given this landscape, Lily, a blonde with a pert nose and Devonshire cream complexion, allowed herself to blend into the non-Jewish world around her. She married Major John Graham Gillam, a well-born WWI veteran who helped her lose a Yiddish-inflected Cockney accent, learn proper etiquette and become a dance hall performer of some acclaim. Lily assumed the stage name of Sheilah Graham, befriended a series of blue bloods, and moved on to writing Fleet Street fluff. In 1933, she left her husband — their relationship had been platonic almost from its start — to relocate to New York City, though she supported Gillam for the rest of his life.

Soon Graham felt the lure of Hollywood, where she began to report on film industry celebrities. Along with Louella Parsons and Hedda Hopper, she brandished vast influence when Hollywood was manufacturing the celluloid fantasies that helped get America through the Depression. Graham continued writing her syndicated column for decades. At its peak in 1966, it appeared in 178 newspapers. She went on to success in both radio and television, creating one of the earliest TV talk shows, a forerunner to those of Barbara Walters and Oprah Winfrey. Yet Graham famously told a San Francisco Chronicle reporter that, “I’ll only be remembered, if I’m remembered at all, because of Scott Fitzgerald.”

The two met in 1935 at a party Robert Benchley threw for Graham and her fiancé, the Marquess of Donegal, a journalist, landowner and member of the House of Lords. Along with other admired writers, Fitzgerald had recently arrived in Hollywood to try his hand at crafting screenplays for MGM, which during the Depression was an exceedingly well-paid gig. By all accounts, Graham never expected her engagement to lead to marriage, which would require Mum’s approval and probably unmask her secrets. Perhaps that’s why she flirted back when Fitzgerald — whose charm was intact even when his literary reputation and bank balance were not — made overtures. Their chemistry was, apparently, instant. From the start, he wooed Graham with flowers, notes, dinners and the high wattage of his attention while his mentally ill wife, Zelda, languished in a North Carolina sanitarium.

For a considerable time, Graham did not reveal her Jewish background to Fitzgerald. But by 1938, provoked by a discussion about Hitler’s rising power, she felt pressed to come clean, explaining that she was actually Lily Shiel, a Jewish slum child. She justified her break with her religion by claiming that most people saw Jews as evil, pushy and too smart for their own good. Fitzgerald reacted with shock, and cited their many Jewish friends and employers, including the late Irving Thalberg, whom he idolized. This led to Graham to challenge Fitzgerald on overt anti-Semitism in his novels, pointing to his character Meyer Wolfschein in “The Great Gatsby,” as Exhibit A. In high dudgeon, Fitzgerald copped to provincialism, though not bigotry.

After this incident, Fitzgerald sent Graham a love poem he titled “A Beloved Infidel,” in which Stepney Green, the Jews’ Hospital and Orphan Asylum and Graham’s roots don’t merit a line. Apparently, Fitzgerald, a prudish romantic, cared far less about Graham’s background that her history of having been previously intimate with more than one man. Her disclosure about her Jewish background, however, did affect Fitzgerald. With her encouragement, he started the novel that became “The Last Tycoon.” A character called Kathleen is modeled after Graham, and the protagonist, the clearly Jewish Monroe Stahr, is a stand-in for Irving Thalberg. (Bizarrely, he claimed to Graham that American Jewish parents liked to name their sons for presidents.) To smooth the writing process, Fitzgerald hired a secretary, a young Jewish woman named Frances Kroll. Soon enough, Fitzgerald found two Jewish women spinning around him like dreidels.

Sadly, Fitzgerald did not live to finish “The Last Tycoon.” One afternoon in December 1940, shortly after Kroll dropped off his mail, he died of a massive heart attack in Graham’s apartment. She was excluded from his funeral.

Though Graham married three more times, each relationship was brief; reportedly, she remained in love with Fitzgerald for the rest of her life, and though her Jewishness became an open secret, she never disclosed that fact. Shortly before her death at 84, however, Graham attended a Seder, where she felt free to criticize the host’s Hebrew pronunciation. Lily Shiel had, after all, won the Hebrew prize at the Jews’ Hospital and Orphan Asylum in Norwood.

Sally Koslow is the author of the novel “Another Side of Paradise,” published by Harper.