We Need To Talk About How Israeli Men Treat American Women 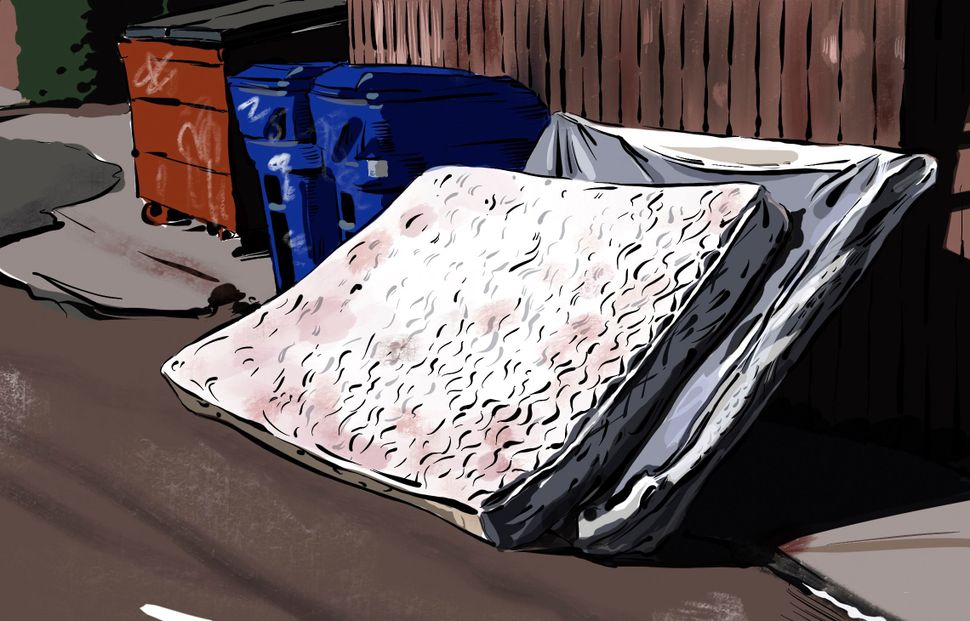 When I took a Birthright trip to Israel, the main attraction was not the land. It was our Israeli security guard.

His name was Uri or Guy or something — one of those names we don’t have in America that means “pebble” or “biblical general.” He seemed mute. And he was as fresh from army service as a Krispy Kreme doughnut sliding off a conveyor belt. “How do you say, ‘What time is it’ in Hebrew?” all the American girls would ask. “How do you say, ‘vodka’?” Lindsay only wanted to learn one phrase in Hebrew. “How do you say, ‘DON’T LIE’?” she asked. He looked at her with those blue-gray eyes that had seen families torn apart by war (we imagined.) “Al teshaker,” he said.

AL TESHAKER. We drove to Tzippori, the ancient Jewish town in northern Israel that contains mosaics that some scholars claim represent early liberal Judaism. “AL TESHAKER,” Lindsay told the mosaics. We attended a presentation on the Israeli-Palestinian conflict. “AL TESHAKER,” she said to our guide. In Tel Aviv, a man on Rothschild Boulevard slid his hand down her back and told her he had been in a classified combat unit in the army. “AL TE­SHAKER!” she said. And walked away.

A few months ago, a woman named Carey Purcell wrote an essay for the Washington Post in which she alleged that two Jewish men had dumped her because she was not Jewish. I do not wish to join Purcell in the wasteland of those who believe their loneliness is the result of a Jewish tribal scheme. Even so, I feel duty bound to report a trend I have observed within a subset of Jewish men. Specifically, Israelis.

Across cultures, men are taught that women are sexual prizes to attain. This is as true for Jewish men as for any other men. So I tread very carefully when I say, with much Jewish pride and Zionist zeal, there is a systemic problem of Israeli men treating American Jewish women poorly.

Al teshaker! Dear reader of the Forward, my companion in the project of continued Jewish success, I just can’t lie to you. On every occasion when I have seen a group of Americans and a group of Israelis mix, I have noticed this. The American men have behaved toward the Israeli women with the exact same range of buffoonishness they show their own countrywomen. But the majority of Israeli men have approached the American women with something like a sense of entitlement.

I first observed this trend when I was a counselor at a Jewish summer camp with an Israeli staff. Most male Israeli staff members used a sexual tone in all conversations with women, aggressively sought out American sexual partners and compulsively discussed American women’s bodies. These same men seemed to have friendly, respectful relationships with female Israeli staff members. I asked Ben, an Israeli counselor who was dating an American, if I was being crazy. “Not crazy,” he said. “We know in Israel — the American girls are easy. But we will never treat an Israeli girl this way.” Another friend, Dotan, was also forthcoming. “In Israel, girls are — you date them, or they are your friends,” he said. “But in America, the girls… they want it.”

Years later, I thought about this as I watched girls on my Birthright trip ask Uri/Guy/Avimelech to see his gun. As I believe it says somewhere in Leviticus, ain’t nothin’ wrong with “wanting it.” Who wouldn’t be attracted to a brooding, foreign youth who had served his country and was the only person capable of getting you to the clinic to get a rabies shot for your feral cat bite? But should a woman expressing desire be treated like a compost-bin liner?

But back to camp — I worked there a second summer and saw the same dynamic play out between Israeli men and American women. The third summer at camp, Ben and Dotan ate dinner during training week with the camp’s sports coach, an American. “What do you think of Jenny?” the coach asked casually. “No, no,” Dotan shook his head. And Ben agreed. “She is… cold bitch. She will never put out.”

The coach told me this as soon as we started dating. I confronted my friends. “Why did you say I was a cold bitch who would never put out?” I asked. “Jennnnn-y,” Ben said. “This was a man talk. We did not know he will tell you.” “I’ve been your friend for years!” I said. “You’d known him for three days.” They acknowledged this was true. Next time, I said, they should think of more flattering adjectives. They sighed. “We did not know you will like this small sports man,” they said.

Dotan went on to date my best friend. He didn’t treat her like she was “easy,” or maybe he did not think of her in those terms. Sometimes I would catch him folding her laundry in his bazooka-capable hands, and he would sigh and say, “I want to take care of her.”

I’m not saying that there’s something wrong with Israeli men or American women. I’m just saying that where the Zionist propaganda machine meets the Jewish continuity machine, we have a problem, and only women get punished. I’m saying that when I go to parties and think about how there is nothing worse than the way American men approach women, I am often proven wrong — the way Israeli men approach American women, with absurd pickup lines and kissing the women’s necks and talking about their real estate ventures, is worse. And yet these men seem to be able to have platonic friendships with Israeli women at a depth that Americans usually can’t or won’t try for.

The solution is probably something complicated involving less-utopian, less-gendered Israel education in America, an anti-machismo social movement in Israel and a full restructuring of Western sexual mores. But that’s not in my job description, so I’ll just share a cautionary tale:

Two months ago, Lindsay from Birthright fell in love with an Israeli. He’s straight out of an AIPAC pamphlet — his name is a random Hebrew noun, his hair is longer than hers and he spends his every free second in the gym. After weeks of flirting, they finally spent the night together in his apartment, where they shared a twin mattress floating on a king-size bed frame — both rescues from the New York City sidewalk. He said he didn’t have a condom. There might as well have been a neon sign on his wall blinking “LIAR.”

He didn’t call or text her afterward, though they had been friends. She tried to brush it off. But she told me that she’d never felt this way about anyone before. She said that every beautiful thing she saw and every joke she heard reminded her of him. After a week of being ignored, she confronted him. He claimed to have no idea what she was talking about. Turns out he’s marrying a wealthy American woman who’ll pay for his immigration lawyer. Of course, this could have happened with a man from any country. But it happened with him, a man she met at an Israeli cultural event. A man she had helped find an apartment. “I just don’t understand why he doesn’t like me anymore,” she said. “But it’s fine. I’m over it.”

“Al teshaker,” I wanted to say to her.

We Need To Talk About How Israeli Men Treat American Women