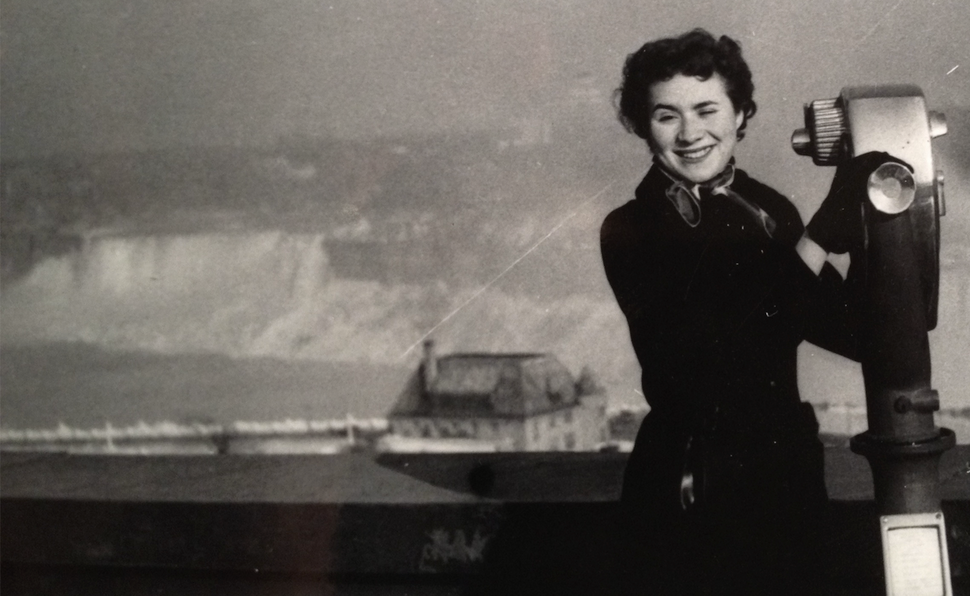 She crossed so many borders I started to lose track: Poland into Germany via cattle car; Germany into Czechoslovakia on foot; Czechoslovakia into Germany when she and her parents fell asleep in a (supposedly) broken-down train car that inched back into service while they slept; Germany into Canada on a steamer, loaded down with a trunk of supplies for her new life; Canada into the US.

When I asked about the last two crossings, if she was scared she would be caught by authorities after lying to get her Canadian visa, she answered, “It wasn’t the Germans. It’s not like they were going to kill me.”

In April we started the long walk. The Germans were losing the war, and they needed to get rid of the few Jewish prisoners, who weren’t supposed to have survived. Grandma Eva and her mother, my great-grandmother Esther, were still prisoners in bombed-out Dresden when the SS guards announced that all of the former Flossenberg camp prisoners would be leaving. In typical fashion, they didn’t say where they would be going. This time, though, there was no cattle car waiting at the station. (There was no longer a station.) Grandma Eva and her mother, along with the other women, began walking, unaware that they would be walking all the way from Dresden to the Czechoslovakian concentration camp, Terezin, a distance of 80 kilometers.

They traced the Elbe River. There was very little food, and no extra clothing for the cold German spring. The only consolation that Esther took was that the Germans must have been faring badly in the war because the guards were so brutal — she could sense they were scared. That and the fact that she found out that her husband, my great-grandfather Marek, was still alive, on the men’s side. None of them knew that their long walk had a name. It was the Death March.

They marched past red-roofed cottages nestled between trees, village churches with clean white steeples. They marched through town squares, right next to houses with regular people living inside. Their crossing was out in the open, flanked by armed SS. I remember walking one evening through a village and looking up at lit windows of homes and thinking that behind those windows people lived normal lives. They had families, beds, food. People stopped and stared at us. Whether these townspeople in villages seemingly untouched by war knew about the camps before seeing the prisoners walk right past their front door or not, they knew now, and they stared. Now they were complicit.

A man handed Esther a chunk of bread as she marched through one of these towns, on the outside of a column of women. This was a courageous act. If he had been caught, he would have been shot on the spot.

Most nights the prisoners slept on the ground in open fields or small soccer stadiums. They huddled together for warmth, eventually dropping off to sleep out of exhaustion. We spent so many nights picking lice from one another’s short new hair. We would smash the lice with our fingernails. What a sight we must have been! It was in one of those outdoor stadiums that Esther learned of Marek’s deteriorating health — he was so weak that he was unable to walk. Not being able to walk meant a bullet.

The prisoners were not allowed to stop marching for any reason, which became a problem when a nail from Grandma Eva’s wooden clog pierced her skin and got stuck in her left foot, attaching her foot to the inside of her shoe. It hurt so much that she cried out and had trouble walking. Esther asked the guard, a Ukrainian named Katja, if she and her daughter could stop just long enough to remove the nail, but Katja refused.

Grandma Eva hopped on one foot for hours until they stopped for the night. Esther pulled the nail from her foot and pounded it out of the shoe with a rock.

The women were relieved one night when they stopped to sleep in a barn — what a luxury to sleep in soft hay instead of on the hard ground. For entertainment two SS guards came in the dark with pitchforks and stabbed people at random.

It’s not like they were going to kill me. Grandma Eva was already married to Herb Unterman, a charming American GI from Brooklyn she had met while living with her parents and new baby brother in Ludwigsburg, Germany, post-liberation. After returning to New York when his service was up, he proposed by letter. He invited her to join him in New York, but when she went to the immigration office in Stuttgart, she was told that it would take seven years to emigrate to the U.S., even as a refugee. But they needed domestic service workers in Canada, an official told the nineteen-year-old girl in front of him. Sure, she said, I can be a maid.

After the voyage across the Atlantic, she stayed with Herb’s aunt and uncle in Toronto. He came up for their wedding at the synagogue and a sort of honeymoon day trip to Niagara Falls. Her paperwork stated that she had to remain in Canada, employed as a domestic servant, for at least two years, but after a few months, she grew tired of living with her groom’s parents. He was back in Brooklyn, and she wanted to be there too. So she tore up her papers and crossed into the United States. 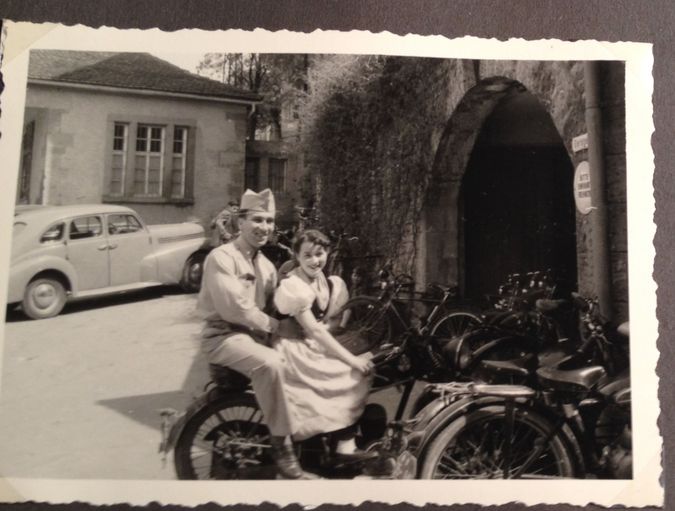 Grandma Eva and Grandpa Herb in Germany. Image by Courtesy of Sophia-Marie Untermann

Grandma Eva is not your typical grandmother. She lives in Tulsa, Oklahoma, an unlikely spot for a Jew, not to mention for a Holocaust survivor. She advocates for immigrants’ rights, writing letters to the editor, speaking at interfaith events, and raising money for the immigrant community in Tulsa. And she is incensed by the most recent news, the concentration camps for children at the U.S. / Mexico border, the children being pried from their parents. Separated. She managed, throughout the entire Holocaust, to remain with her mother. That (along with sheer, dumb luck) is how she survived.

Dad and I blasted Wagner’s “Ride of the Valkyries” from my iPod as we accelerated the Skoda across the border into Germany, past a gaudy Deutschland sign, flanked by a blank-eyed eagle. Grandma and my sister Phoebe, asleep in the back, bolted awake.

“Turn that off!” they both shouted, but not before a burst of laughter from Grandma.

The four of us were tracing Grandma’s childhood journey. After almost a week in Poland, we were more than ready to leave for Germany, where we would be staying with Grandma’s brother Eli and his family, near Stuttgart. The EU was still intact, the borders fluid, and we sailed through without so much as a checkpoint stop. 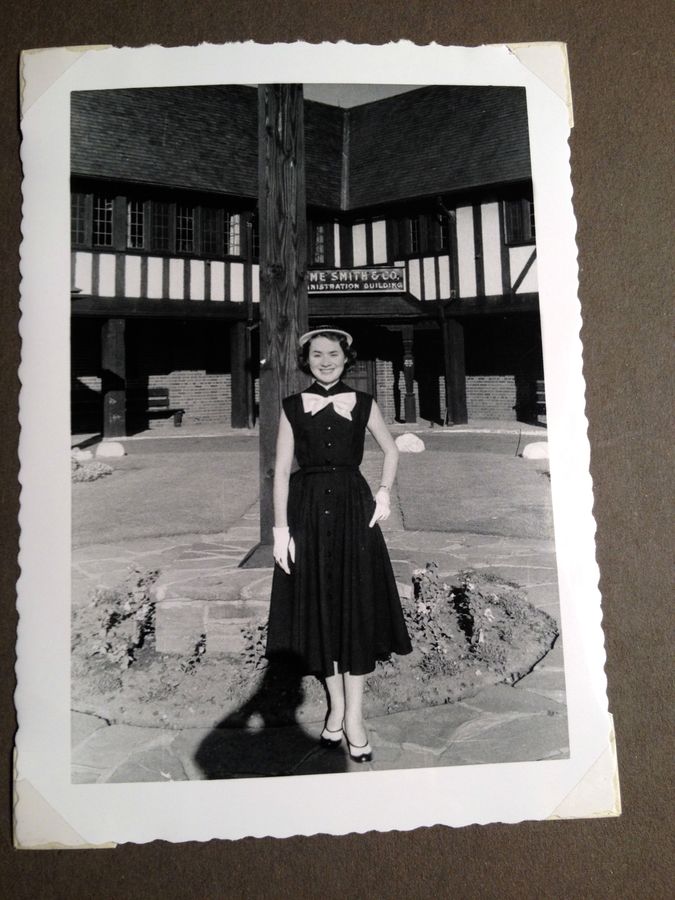 Grandma Eva in the south, circa 1950s. Image by Courtesy of Sophia-Marie Untermann

Grandma doesn’t get emotional when she tells her story. Since the 1970s, she’s spoken to large groups frequently, sharing unimaginably horrific details without shedding a tear. But when I spoke with her recently about the immigrant children detained and separated from their parents at the border, she got emotional. Hearing her story again, of surviving because she was never separated from her mother, made me think about another survival story I’d just been told.

I teach in New Orleans, at a public charter school that flanks the Lafitte housing projects, in Treme. One of my students, a third grader, Manuel, told me about how he came to the United States. He rushed into the classroom from his English as a Second Language class, a peak of whipped cream on his nose.

Can I tell you a story? he blurted, staccato. A year ago my dad and I walked in the desert for fourteen days! No water, no food, and we had to hide. That’s why Mr. Robichaux brought pie to class because I’ve never had it, and neither did Cerise. But now we all have. I like pie!

As he gave me more details, I realized how much his story reminded me of Grandma’s, in the way that he survived because of his father. He was six when he ran through the desert at night, hid and tried to sleep during the day. His father was the one who found water, food, a way to reach family in New Orleans after making it across the border. It’s a completely different situation from the Holocaust, of course — immigrants from south and central America fleeing violence and hardship for a life in the U.S. — but the theme of parents protecting their children runs throughout both. It’s unimaginable to Grandma, to me, to everyone, that children would be ripped from their parents.

After all, it was Esther who found a well to hide Grandma Eva in when they were in the Lodz Ghetto, the one who hid her in the bunks at Birkenau during the day and snuck her potato peels. When Grandma Eva woke up one morning paralyzed from typhus, unable to stand, it was Esther who found a way to trick the guards during morning count; she dressed Grandma in a too-long pair of uniform pants and then hooked Grandma’s shoulder blades to hers on one side and to another prisoner’s on the other side, so it looked as if Grandma Eva was standing.

Grandma panics when she sees a child separated from his or her parent. When she sees a child alone in a store or on the street, she becomes visibly distraught. When a local new story comes on about a kidnapped child, she calls us, a reflex. I neglect to check in for a few weeks, and I get a strained voicemail. I haven’t heard from you in a while. I just want to make sure you’re okay.

Sophie Unterman is a New Orleans-based writer and teacher. Her work has appeared in The Iowa Review, Guernica, and The Toast.

Editor’s Note: Some names have been changed to protect privacy.