Dressing Modestly Didn’t Mean What I Thought It Did 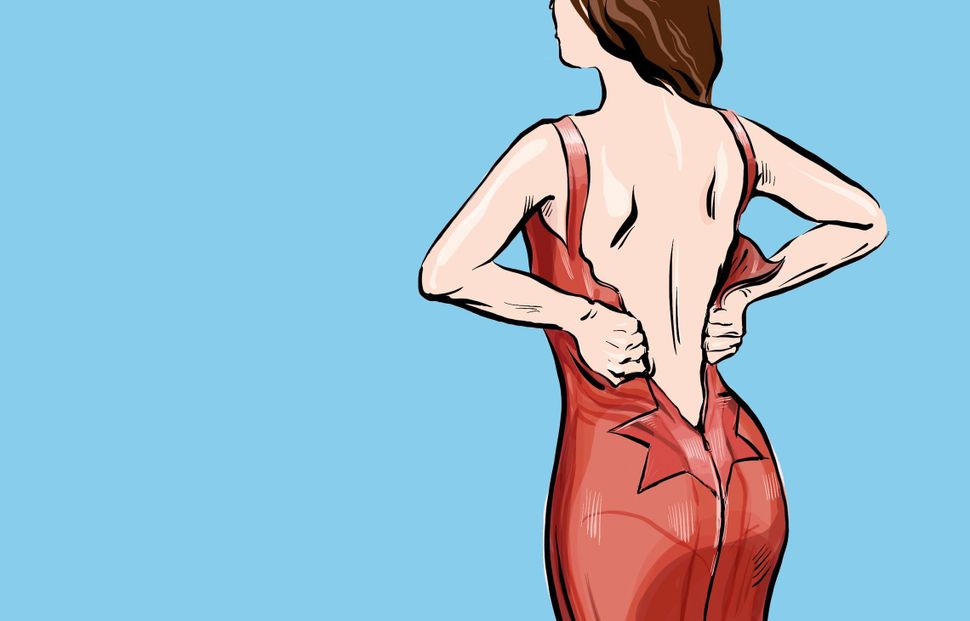 The very first time I was invited to a wedding by a peer, the ceremony was Orthodox. I am not Orthodox. But I knew how to dress the part.

So the night before the wedding, I paraded my most modest clothing for Shmuel, an Orthodox friend. I chose an outfit I felt demonstrated that I know how to respect the demands of an Orthodox space: espadrille platform sandals, an ankle-length skirt my dad bought me in a market in Thailand, and a loose cardigan.

Shmuel squinted at me. “That’s not right,” he said.

Really, I thought. The Orthodox ask too much. Last time I checked it did not say BYOW (Bring Your Own Wig) on the invitation. I could not think of a single way to make myself look more modest.

When we arrived at the synagogue, a staff member exchanged our coats for tiny Mason jars filled with sangria. I looked around. The interior of the synagogue seemed to have been removed and replaced by piles of tulle. Satin was draped on every surface, and there was a different string quartet strumming “Dodi Li” in each corner. Men dressed in summer suits were eating kosher sushi. And the women! Everywhere I looked, statuesque women in clingy, floor length evening gowns were tossing their glossy blowouts behind ears dripping in diamonds. Girls my age were wearing skintight, crystal-studded dresses with long sleeves and 4-inch stiletto pumps. I gazed down at my baggy sweater, maxi-skirt, and un-pedicured toenails. I looked like I had wandered in from the nearest shtetl. What Shmuel had tried to say but lacked the fashion vocabulary to express was, “It might be an Orthodox wedding, but it’s still a wedding.” Modesty doesn’t mean dressing like a Von Trapp, you Reform peasant, I admonished myself.

I spent the entire thing wedding like an orphanage escapee. And what’s more, I never forgot that lesson: Modesty doesn’t preclude style.

And so, last month, I prepared to attend the Chabad Young Professionals Gala with the energy and attention of a NASA astrophysicist preparing for a moon landing.

This time, I was determined to fit in.

I got a manicure. I purchased control-top stockings. I did an advanced facial skincare routine that I would detail here if it was not the length of “Bleak House.” I borrowed a pair of Spanx, a contemporary version of the corset that belongs to a lingerie genre known as “shape wear.” I tried to eat less food in the 48 hours leading up to the event. I showered and deep conditioned. I blow dried and straightened and styled my hair. I selected a backless, skin-tight, sleeve-length, red pencil dress that makes me look like I am appearing at a press conference beside my unfaithful state senator husband.

To make the dress look “modest” (to cleave to the convention that breasts should look like bras, but bras should never be seen) I needed to own something called a “sticky bra”— adhesive cups that cling to the body without straps or clasps. I went shopping for one at Rite Aid, where there turned out to be six options. You heard it here — the small-breasted middle class can truly live like kings at the Rite Aid on 96th Street. I layered the dress on top of the sticky bra and stockings, which I had topped with the Spanx. I then asked a friend to tape me into the dress, so that the back of the dress wouldn’t gape. I swept foundation onto my skin and applied so much eye makeup that I got an infection. I put on a pair of black heels. Then my friend and I left for the Chabad Young Professionals Gala.

Boy, was my face ever red when I strutted into the gala and saw a room full of down-to-earth young people casually socializing in a brightly lit gymnasium! Just kidding. It was pretty fancy, and everyone looked like me except richer and thinner. But I fit in.

Flush with my success, I told an Orthodox friend about scruples I took to get ready for the dinner, “just like the girls from your community!” She laughed in my face, like a cartoon witch. “Your prep took a few hours,” she said, cackling. “I have friends who start weeks in advance.”

Far be it from me to accuse the Orthodox world of fostering superlatively demanding beauty standards. It’s just that I thought that maybe communities that place tremendous value on things like religious observance would be an exception to the rest of the world’s oppressive insistence that women augment their appearances to meet arbitrary standards.

And now we come to a problem even more layered than the undergarments I wore to the Chabad gala. Of course wanting to look sexy isn’t sexist. It is natural for any person to try to improve his or her appearance in order to gain status or attract a mate. It’s just so, so much worse for women. Let me illustrate my point: the moment you find yourself hiring a professional to pour hot wax on your labia (at great financial cost) you have to wonder if things have gone a bit too far. As a stranger rips hair out by its roots with the gusto of a young child ripping apart a house in pursuit of the afikomen, you marvel over the fantastic social pressure that would find you not only paying for this privilege but also calling it a “choice” or even a “treat.”

For men, beauty norms that compel women to do things like, say, have the hair that grows on their genitals permanently removed by lasers may be mystifying. “Just stop,” you might say. But as a woman, you’re already screwed. You’re screwed the moment you’re born into a patriarchal world, which will limit you and injure you and charge you money your whole life. But if you try to buck those limitations — by not wearing makeup, styling your clothing, or removing your body hair — you’ll suffer. Screwed again. Sure, I could have gone to the Chabad event dressed as myself. But why should I limit my chances to impress men who, by no fault of their own, have been conditioned to be attracted to hairless, hungry, women-children?

There’s no incentive for women to dial down their beauty labor because if they do, they’ll lose social value. And in many parts of the Jewish world, where high premiums are placed on marriage and reproduction with edicts coming from places as high as parents and God, things are even worse. In a world where women are registered at birth to sign up for a race to mix genes with genes of those who have gone to medical school or achieved a CPA, how can we ever hope to break this cycle?

Once in college, I got ready to go to a meeting while my ex-boyfriend sat and watched. I picked out an outfit, applied a minor amount of makeup, and rearranged my hair. “Wow!” he commented, with more awe than malice, “I had no idea how shallow you are.”

I found this hysterically funny. Did he really have no idea that all summer I’d been stealing precious sleep time to shave my legs? Did he not know I’d been carefully selecting flattering hoodies to wear on our late night hangouts and battling humidity on Friday afternoons to straighten my hair for Shabbat?

How could a person who let me use his toothbrush not know that I had spent a season rigorously moisturizing, just so every part of my body would feel soft in case he chose to touch it?

As I left for my meeting, I thought about how my and many other women’s feeling of subservience to patriarchal beauty standards really is a labyrinth from which escape seems impossible, particularly in the Jewish world, where sexual competition is rampant and high-stakes.

I’m just kidding — as I walked away, I was thinking about how my ass looked.

Dressing Modestly Didn’t Mean What I Thought It Did