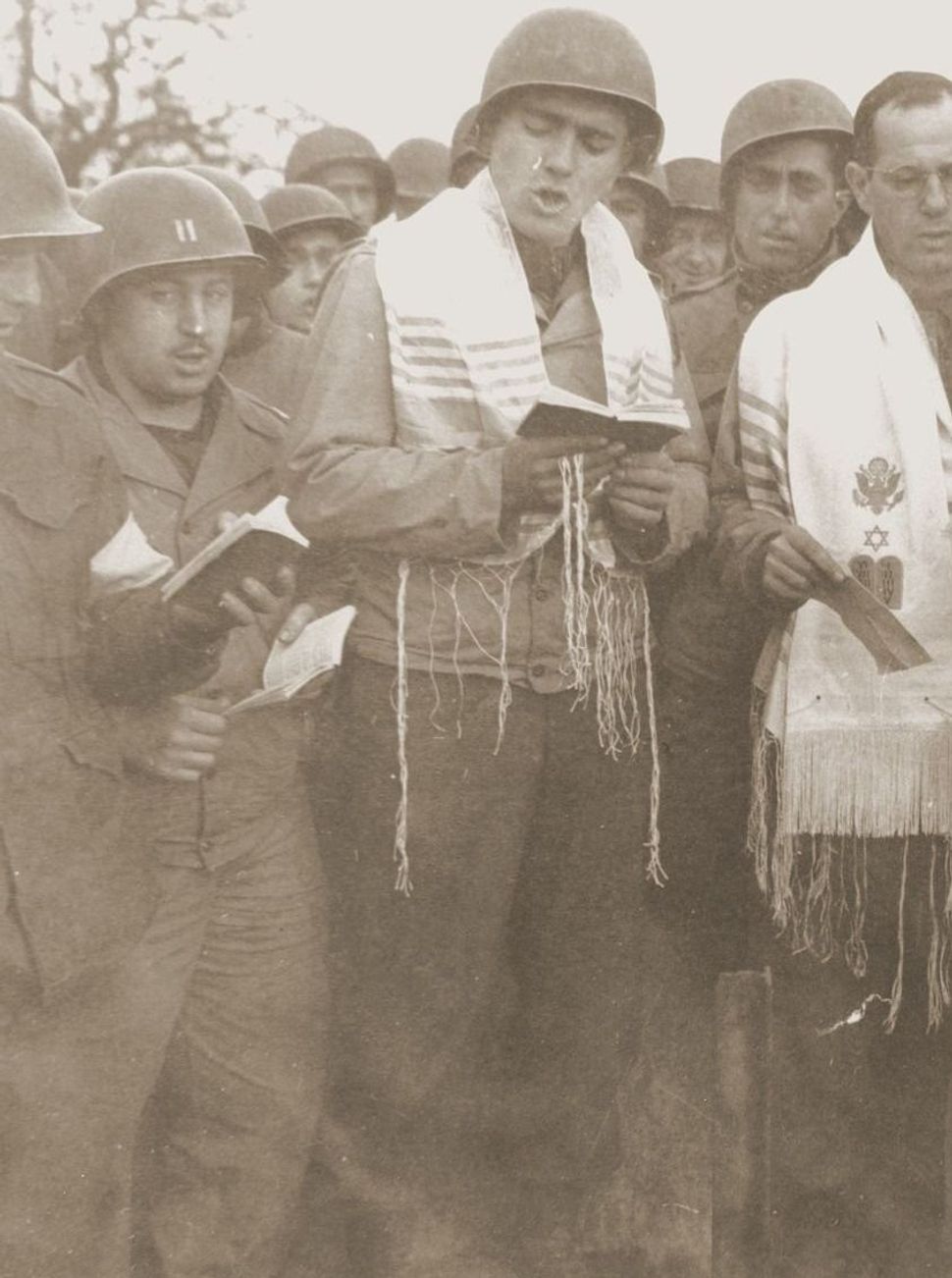 Mordechai (Max) Fuchs, who died on July 3 at age 96, was a survivor of a time when heard Jewish melodies were sweet, but those unheard were sweeter. An amateur cantor, he participated as a rifleman in the Normandy Invasion on D-Day, landing on Omaha Beach, where he was hit by shrapnel. Born in Rzeszów, southeastern Poland, at age 12 he relocated with his family to New York’s Lower East Side, where he attended a yeshiva and studied chazzanut. When he heard of the fate of his relatives in the Holocaust, he resolved to fight the Nazis. The Jews of Rzeszów needed all the help they could get. Numbering 14,000 before the war, only 700 would survive by fleeing and in deportation camps. Almost all of these finally abandoned Poland, where anti-Semitism only intensified after the war. With some of these grim stories in mind, Fuchs fought in the battle for Aachen, Germany.

In October 1944, a Shabbat service was planned for Jewish soldiers, and although a rabbi was present as chaplain, no cantor was available. When the soldiers were asked to volunteer, Fuchs said that he would do his best. As gunfire resounded nearby, he sang “Ein Keloheinu” and “Yigdal,” specifically chosen because of their brevity as well as their familiarity. In photographs, the few dozen soldiers look somber and somewhat numb, the way combat veterans do. The brawny Fuchs towers over the other worshipers, who sound very much like a GI chorus, touching in the rough and ready quality of their voices. They were aware of the weight of their responsibility as bearers of Jewish tradition.

The U.S. military seized the opportunity to send an international message by recording the service for broadcast and releasing a transcript to better promulgate a message of interfaith tolerance. NBC radio broadcast it twice across America and again for good measure in Germany. David Sarnoff, the Russian Jewish-born head of NBC, must have kvelled that less than two months after the Aachen service, NBC’s greatest musical star, the conductor Arturo Toscanini, would lead a radio performance of Beethoven’s opera “Fidelio,” about liberating prisoners, a timely theme. The performance starred another noteworthy chazzan, Jan Peerce (born Jacob Pincus Perelmuth), as a liberated prisoner.

No less dramatic was the presentation of the Aachen service by the broadcaster James Cassidy who introduced a “program of historic moment, the first direct broadcast of a Jewish religious service from German soil since Adolf Hitler and his Nazis began the destruction not only of the Jewish religion but of all religions, more than a decade ago.” Rabbi Sidney Lefkowitz (1908-1997), a U.S. Army chaplain, quoted from the Book of Isaiah: “How sweet upon the mountain are the feet of the messenger of good tidings.” After the brief ceremony concluded, an interfaith message was added to the broadcast, much needed in a time of ongoing religious and racial bigotry in an army containing many minority groups.

A Catholic chaplain, Edward J. Waters, stated: “We find it difficult even to comprehend the diabolical persecution of the Jewish race practised by the Nazis. I know of the terrible physical and mental strain, the sobs and groans, the pain and suffering which the Germans have inflicted on the Jews… A great number of Jews are alive today in France and Belgium because Catholics at the risk of their lives hid them, fed them from their own meager rations, and protected them from Nazi villainy.” Lieutenant Colonel Bernard F. Henry, a Protestant, added: “Nazism was never really able to crush the heart of man and remove his longing for God. The tortures and death imposed upon the Jews of Germany and the enslaved of Europe have failed miserably in their real purpose.” While these comforting words were intended to make listeners of all religions feel good about their faiths, Fuchs and Rabbi Lefkowitz had further trials to endure. Rabbi Lefkowitz would soon participate in the liberation of Nordhausen concentration camp. Formerly of Richmond, Virginia, after the war he moved to Jacksonville, Florida to lead Ahavath Chesed, where a new variety of violent racists became a threat to life and limb.

As for Max Fuchs, after surviving the war, he continued his studies of chazzanut and served as cantor at the Bayside Jewish Center, Queens for decades. He also kept a day job as a diamond cutter in Manhattan, a skill requiring extremely steady nerves. Over the past two decades, Deborah Moore’s history, “GI Jews: How World War II Changed a Generation” and a recent PBS documentary inspired by it, shed light on a generation of American Jews who risked their lives to defend their country. They sometimes abandoned careers as cantors because there was no place for a cantor in the U.S. Army of the time. Only in 2012 would the Army announce the appointment of its first official cantor, First Lieutenant David Frommer, a member of the New York National Guard’s 27th Brigade Combat Team, who has sung at services in Kuwait.

A lifetime before this development, Cantor Eleazer Schulman had studied chazzanut, singing as a 17-year-old at Congregation Anshe Russia in Newark, New Jersey, as well as preparing for more theatrical performance at the Grace Moore School of Opera. Assigned to the Special Services in the Second World War, Cantor Schulman gave concerts of popular and classical songs to wounded soldiers in hospitals in Italy, while also participating in Shabbat services in Tunis. Cantor Schulman led the first Rosh Hashanah service in Italy shortly after the fighting ceased, and officiated at the first Shabbat service in Germany with the 7th Army and General Dwight D. Eisenhower attending. This event somehow escaped being recorded or photographed. Like Max Fuchs, Cantor Schulman was also wounded and decorated, and after the war, returned to Congregation Anshe Russia, later singing at the Avenue N Jewish Center and Great Neck Synagogue. Cantors Fuchs, Schulman and others showed that the Jewish voices were present amid the fighting, but only rarely were the army brass prepared to hear them raised in defiant song.