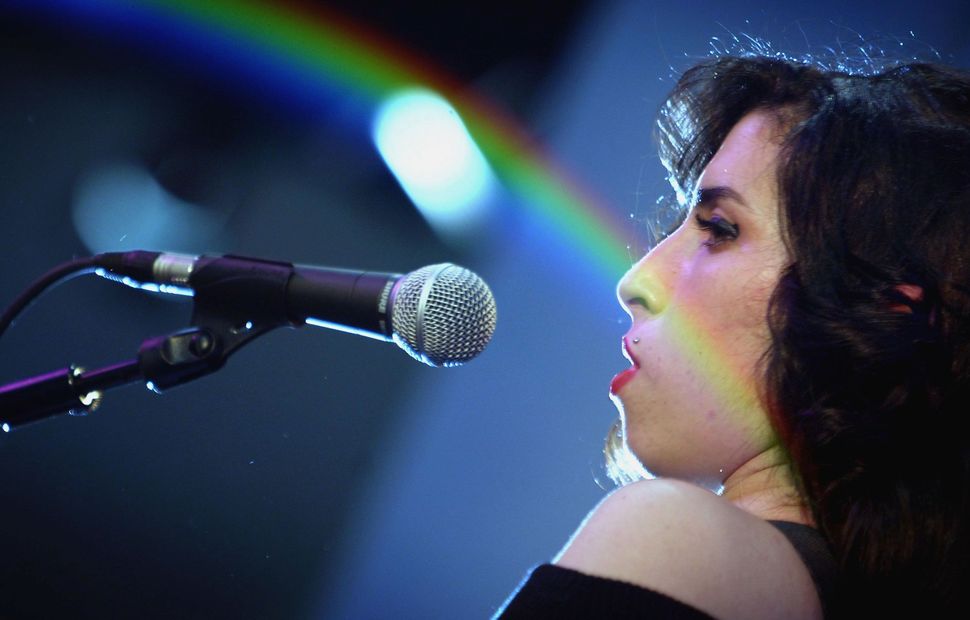 When we imagine Amy Winehouse, the late and troubled singer-songwriter of “Rehab,” we may imagine her jet-black bouffant or her severe eyeliner. A new photo book, out in August from Taschen, appears to challenge and, at times, reinforce that image. Simply titled “Amy Winehouse,” the book seeks to strip away the patina of makeup to reveal a young woman with a softer edge than we may remember.

The collection by photographer Blake Wood, Winehouse’s friend, features a startling picture of Winehouse on horseback in Saint Lucia. Presented in dull color, she smiles for the camera, clad in just a bikini top and faded jeans. A Star of David pendant hangs from her neck. Her lashes are still well-defined, but her hair, untamed by product, waves and curls in the wind. If you overlook her many tattoos, you might mistake her for an early Israeli settler on the beach in Tel Aviv.

In another snapshot from the Saint Lucia trip, Winehouse is in black and white, again, her hair is frizzy and her face seemingly free of makeup, gazing down and sinking, it seems, into the island foliage. In another, she is seen on the sand in a yellow bikini. She’s recognizable here, with her hair in a swoop, but she’s caught mid-laugh — a kind of vulnerability her stage persona rarely showed.

Much of the book is made up of Winehouse’s winter vacation to Saint Lucia, where she appears to be in good health and at ease with herself. Wood told [the Guardian](https://www.theguardian.com/music/2018/jun/30/amy-winehouse-photographer-friend-blake-wood-intimate-photos-taschen-interview that at the time of the holiday Winehouse had stopped using hard drugs. The early photos previewed by the paper seem to offer a poignant glimpse into a troubled life that, despite a tragic ending, had its moments of calm.

“This book, really it’s a love letter to a friend,” Wood told the Guardian. “And it’s a visual diary of us at the time when she was most celebrated by the world, but she was also really misunderstood. She was very much loved by the people around her, and I hope this comes through the work.”