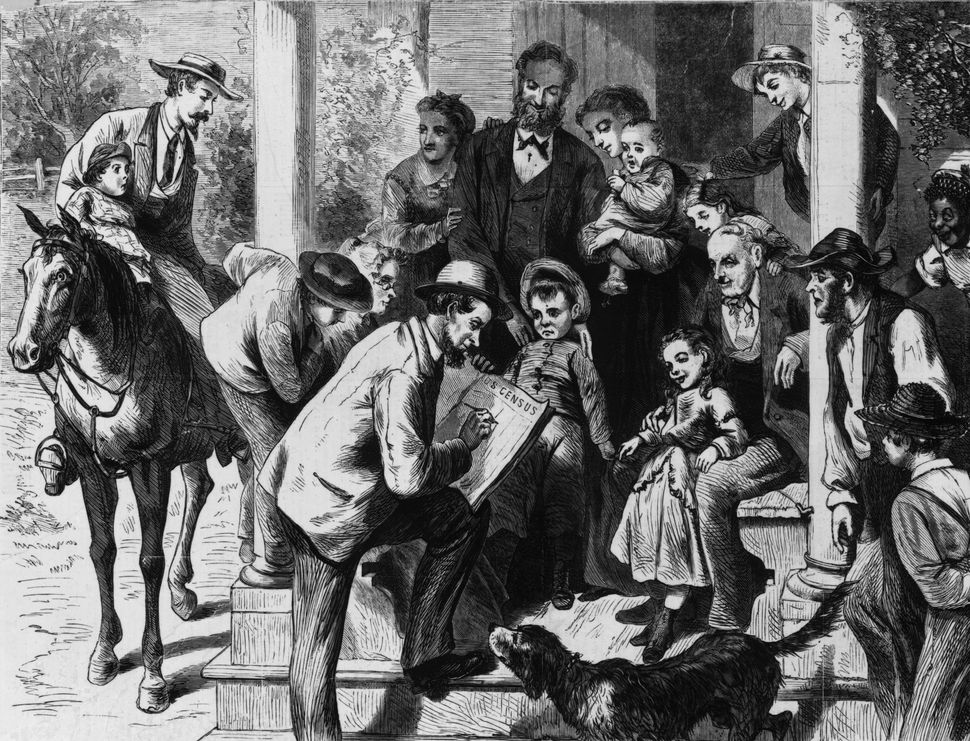 In 1943, Earl Harrison, the U.S. Commissioner of Immigration, announced his bureau would remove the designation Hebrew from its “List of Races and Peoples.” Henceforth, the Bureau would classify Hebrews as white and determine group affiliation by the language they spoke and the country in which they resided. Stuart Rice, assistant director in charge of statistic standards in the Bureau of the Budget, thought these revisions might be relevant as well to U.S. census enumerations. Many Jews, however, continued to worry that government officials might use the data they gathered to discriminate against them.

In “Inventing the Immigration Problem,” Katherine Benton-Cohen, a professor of history at Georgetown University, assesses the Dillingham Commission. Created by the U.S. Congress in 1907, the Commission produced 41 volumes of reports, one of the largest projects ever undertaken by the federal government. Dillingham’s recommendations laid the groundwork for the Immigration Act of 1924, which continued to bar Asians and set quotas based on country of origin that excluded the vast majority of immigrants from southern and eastern Europe.

These days virtually all historians revile and reject the Dillingham Commission. Benton-Cohen reveals, however, that the Dillingham reports, which did not always support the Commission’s recommendations, tell us a lot about a time, not unlike our own, of “simultaneous suspicion and celebration of immigrants, fear of government power and confidence in public policy, need for manual labor” and concern about wages and jobs for so-called Anglo-Saxon Americans.

The Commission, Benton-Cohen points out, paid close attention to Japanese immigrants and virtually none to Mexicans, even though the latter outnumbered the former in the United States by more than two to one. Although Yamato Ichihashi, a Harvard Ph.D. who served as research assistant and interpreter for the Commission, found that Japanese were industrious and eager to learn “American ways,” his recommendation that restrictions on naturalization be eased went nowhere.

Other Dillingham staffers, Benton-Cohen indicates, dissented from the conventional wisdom about “the new immigrants.” Jett Lauck’s study of workers did not justify the contention that they were responsible for increases in crime. Anna Herkner, who held a degree in Slavic languages from the University of California, and was one of scores of women who held positions on the Dillingham Commission, described the abhorrent impact of steerage on poor immigrants, pointing the way toward federal regulation.

And Franz Boas, already a preeminent anthropologist and critic of the theory that biology was destiny, was (surprisingly) retained by the Commission to measure the cranial proportions and body measurements of 118,000 immigrants and their first generation children. Boas concluded that they tended over time to “become similar to the American type.”

Benton-Cohen suggests as well that the modern Jewish lobby emerged at the turn of the century to help shape immigration law.

In “America Classifies the Immigrants,” Joel Perlmann, a research professor at Bard College, provides a cogent and compelling analysis of the muddle of meanings embedded in the terms race, peoples, national origins, and mother tongue as used by scholars, politicians, and administrators in the Bureau of Immigration and the U.S. Census Bureau. At the turn of the twentieth century, he notes, supporters and opponents of immigration restriction acknowledged that government classifications were based on common usage; they were neither precise nor scientific. Bureaucrats in the Bureau of Immigration did not clarify the relationship, if any, between their long list of races (including Hebrews, Italians, Poles and other “undesirable” groups), distinctions based on skin color (white, black, yellow, and red) or the notion that three ancient races (Nordic, Alpine, and Mediterranean) had prevailed in Europe. They did not indicate whether the terms races and peoples were interchangeable. The lines between biological and environmental explanations of the transmission of group mental traits, moreover, remained loosely drawn.

Like Benton-Cohen, Perlmann underscores the special challenges Jews posed to immigration officials. Should Hebrews be classified as a race, a nationality, or a religion? Did Benjamin Disraeli remain a Jew after he joined the Anglican Church? Should Jews who resided in Russia be classified as Russians or as a Jews? Should their “mother tongue” be recorded as Yiddish or Russian?

After a period of uncertainty, Perlmann indicates, the Census Bureau retained race as a classification for non-whites but dropped race as a category for whites. However, the racialization of European white subgroups, which had been institutionalized in the Immigration Act of 1924, remained in force for four decades.

By the 1950s and ‘60s, Perlmann reminds us, ethnicity was replacing race as the preferred term of social scientists, geneticists, and policy makers. Members of ethnic groups, they claimed, shared a common culture, language and religion, a sense of common ancestry and historical continuity, and distinctive community institutions. With the successes of the black rights movement, the emergence of white ethnic pride, the abolition of quotas in the Immigration Act of 1965, and the benefits granted by government to “protected” minority groups, visibility became far more advantageous than it had been in the bad old Dillingham days.

The challenges in tracking different kinds of groups, however, did not go away. Hispanics and Asians became “pan-ethnics.” Their nationalities were subordinated to claims of shared discrimination. With advocacy groups determined to increase their numbers, pan-ethnic origins mattered for census-takers no matter how distant they were in time. Although beginning in 2000, the census permitted reporting of multiple racial/ethnic affiliations, Hispanics were not allowed to declare mixed Hispanic/non-Hispanic heritage on the origins question.

As federal officials prepare for the 2020 census, Perlmann points out, the nature and authority of the concepts of race and ethnicity have been called into question, and the “lines distinguishing kinds of origin are getting fuzzier or at least shifting.” Paradoxically, however, although racial and ethnic identity are now perceived as social constructs and matters of individual choice (not all that different from religion), ethno/racial groups remain as entrenched (and for those in President Trump’s cross-hairs as vulnerable) as they’ve ever been.