Thou Shalt Not Date A Trump Supporter (Or Lie With One) 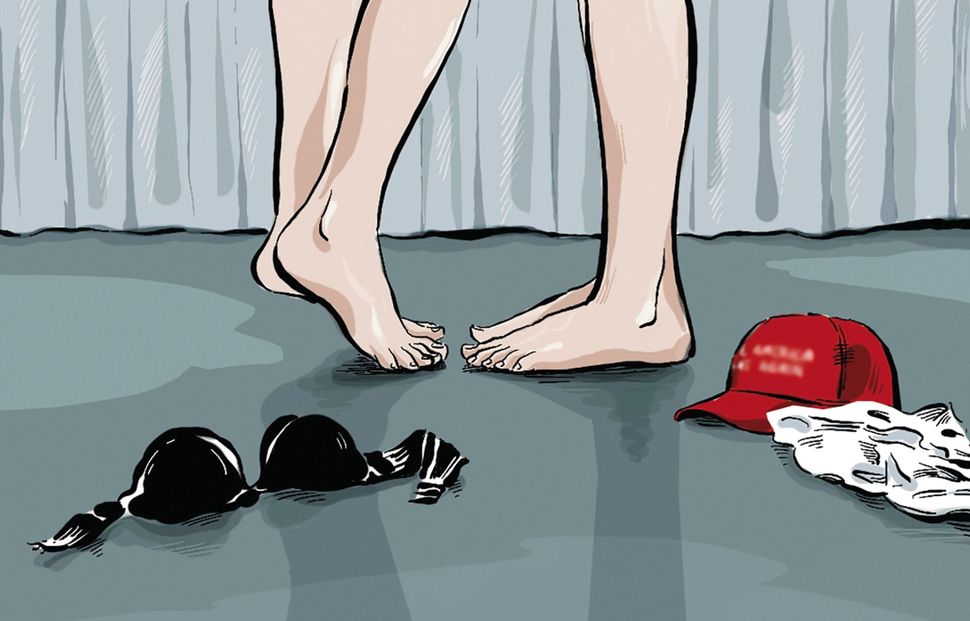 It all started, as it so often does for me, with the cutest dog I had ever seen. We were playing with the puppy in his family’s sprawling uptown apartment, sipping something expensive that had been decanted into a crystal bottle. Then we were kissing in an armchair. Then he was leading me to his bedroom. Then I was closing the door. He was so smart. And he smelled like a Christmas tree. No — like a Havdalah spice box. He was Jewish, of course. Well educated. Ambitious.

Only later, when we were sandwiched between the high thread count sheets on his king-sized bed, did he casually reveal that, in the 2016 presidential election, he voted for Gary Johnson.

I considered my options.

There was the obvious — setting fire to myself and my surroundings. Then the more pacifistic response: wrapping myself in a sheet, wading slowly into the Central Park reservoir while mumbling the Mourner’s Kaddish, and letting nature do its work. I opted for rolling to the edge of the bed, ignoring his increasingly frantic explanations while weepily texting my friends: “ACCIDENTALLY HOOKED UP WITH A JOHNSON SUPPORTER SEND HELP”

I know, I know — I’m just another snowflake. Another liberal arts-infected, participation trophy-clutching member of the elite, providing sexual pleasure for a person who would rather wrest from me the rights to my own body than pay his fair share of taxes. To me, voting for libertarian candidate Gary Johnson in 2016 is a way of announcing, “Not only am I awful, I am also very boring.”

Right now, our nation is engaged in a broad but boring debate: Is it okay for a restaurant to refuse service to an employee of the state? Is this a legitimate act of resistance, or just an incivility that smacks of hypocrisy?

“Sex & the Singer” is concerned not with dining but with dating, and so our question is this: Is it okay for a Jew to refuse to engage in sexual or romantic relationships with a person who does not share his or her convictions?

Our answer on one foot: Do unto others as they would do unto people who are just like you. That is, don’t date someone who makes life harder for people who, like you, belong to minorities.

The rest, below, is commentary.

Jewish responses to perceived anti-Semitism are fierce, as they should be.

In February 2016, Donald Trump played coy about the endorsement he received from Ku Klux Klan leader David Duke, and Jews were enraged. In July 2016, when Trump re-tweeted an image of Hillary Clinton on a pile of cash with a Star of David, Jews were disgusted. In August 2017, when President Trump said there were “fine people” among the mobs marching in the streets chanting “Jews will not replace us,” Jews were terrified.

I am not a fan of self-hatred. Who of us who has named her column after herself and filled it with her own thoughts is? But I found these reactions humiliating.

It all should have been over between Trump and the Jews on June 16, 2015, when he announced his candidacy by calling Mexicans rapists. No one can sympathize with being painted as dangerous and disgusting for political currency like Jews can. No one can sympathize with being banned, tallied up or expelled like Jews can. No need to haggle over the ethics of Holocaust metaphors — simply open up any chapter in a Jewish history book.

And so it should be with dating.

You can date, and fall in love with, and marry anyone who will have you. But Jews, usually, don’t do any of those things with people who don’t like Jews. It’s just not self-preserving. And similarly, if you are Jewish you should not date, or love, or procreate with anyone who makes life difficult for other minority groups. We are all part of the exact same club.

I call this concept inter-sex-tionality — every marginalized community deserves the same amount of equality and safety, so, for God’s sake, don’t give half of your heart to someone who disagrees. For you were strangers in the land of Egypt, and Spain, and Morocco, and most country clubs, until the 1980s.

The theory of intersectionality, first codified by feminist theorist Kimberlé Crenshaw, essentially says that all forms of oppression are connected and that we can’t stamp out some systems of oppression without stamping out all of them. It’s a theory that, despite its innocuous sound, has many conservatives and liberals alike running for the hills because it’s not immediately nuanced. And maybe because it sounds bossy. And maybe because it would be easier to focus just on our own oppression and leave everyone else behind.

But you don’t need to read Crenshaw or Audre Lorde or their umpteen white male detractors to make up your mind on inter-sex-tionality. Just don’t date someone who says about another minority group things that you wouldn’t tolerate if they were said about Jews. That’s not specific to party affiliations; discrimination and harmful stereotyping can find niches to thrive in every ideology.

I went out with the Johnson voter again (the dog really was that cute). And we shared many values and interests. But we didn’t share the value that health care is a right, or the value that it would be foolish to elect a president who, like Johnson, doesn’t know who Harriet Tubman is.

How do we draw the line between upholding our values and shutting down discussion? I think your heart is that line. The writer Robert Jones Jr. sums it up for me. He says, “We can disagree and still love each other, unless your disagreement is rooted in my oppression and denial of my humanity and right to exist.” And one step further: As a Jew, it’s your responsibility to look out not just for your humanity, but also for everyone else’s.

Not convinced? A great rabbi of sorts, John Waters, once said, “If you go home with somebody and they don’t have books, don’t f—k ’em.” If I can add a little Talmudic commentary on that — go ahead and f—k them if you want to. Your body isn’t a gift to give to people as a prize or to withhold as punishment. But then go home and read your own books. And don’t call that person again.

Thou Shalt Not Date A Trump Supporter (Or Lie With One)