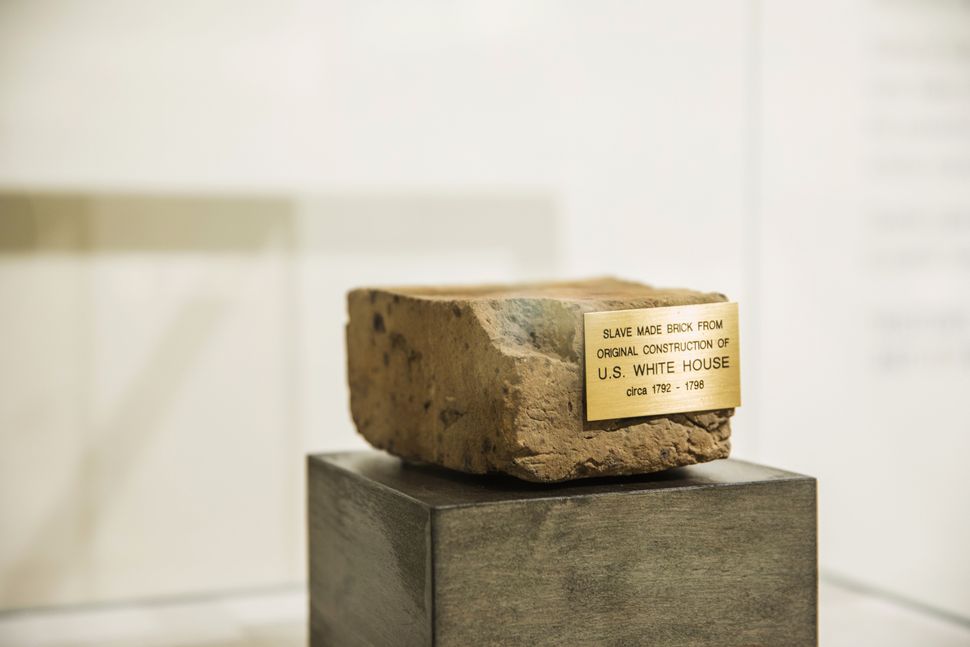 Slave-made brick from the “Testify” exhibit. Image by Bianca Wilcox

As antiques go, this pair of white enameled cast iron drinking fountains, both chipped and one missing the spigot and guard, might have seemed a bit overpriced at $8,625 when they was sold at Cowan’s Auctions, in Cincinnati, but the reason buyers were acquiring it was not that they were thirsty. One of the fountains is labeled “Whites Only,” while the other says “Colored.” Not much is known about how old is the set is or where it came from — auctioneer Wes Cowan knew only that the pair was consigned by someone in North Carolina who claimed to have pulled the fountains off some building — and all that is known of the buyers is that they were African American.

It isn’t unusual for white people to have these reminders of the Jim Crow era of segregation in the Old South: “white” and colored” signs from public amenities; Mammy dolls; Ku Klux Klan robes; “Jolly Ni—er” banks, Sambo salt-and-pepper shakers; lawn jockeys; caricatured faces of black people on books, doormats, posters, sheet music, food products, postcards, trading cards, game boards, food labels figurines and Halloween masks. This is because they or their forebears bought or made them. It also isn’t uncommon that some of those buying these items are the very type of people being mocked and humiliated by these words and images.

“I use these objects to remind myself how far we’ve gone and how we still have to remain vigilant,” said David Pilgrim, a professor of sociology at Ferris State University, in Big Rapids, Michigan, and the founder of the Jim Crow Museum of Racist Memorabilia, which is housed on the university’s campus and contained a 12,000-piece collection that Pilgrim had purchased. He refers to segregation era objects as “contemptible collectibles,” but collectibles they remain, with more items coming onto the market all the time, and prices ever rising. 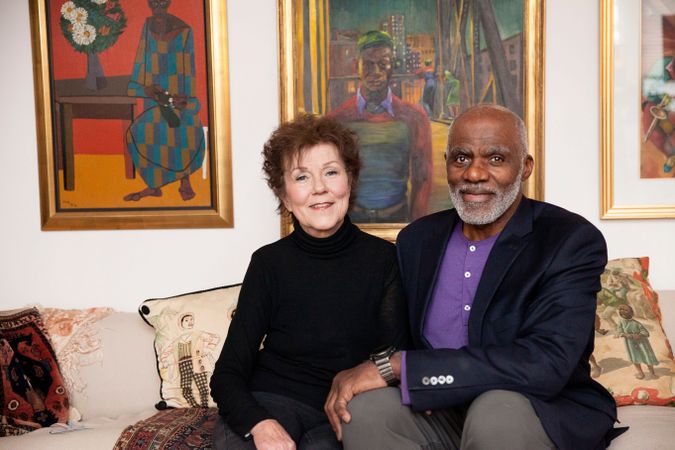 Before founding this museum, Pilgrim had all these items in a room in his house, and undoubtedly that room is a lot less crowded now that his collection has been relocated to the museum. However, the home of Alan Page, a retired football defensive lineman for the Minnesota Vikings and, later, a member of the Minnesota Supreme Court, has hundreds of these objects all over. A can of “Negro Head” oysters is in the dining room, and next to the staircase is a “colored only” sign from a railroad station waiting room. (In fact, there are quite a few “colored only” signs to be found in the house.) “We’re not adding more to our collection right now,” said his wife, Diane Page. “The house is full.” What to do with this collection is a matter of pressing concern to the two of them, as they are both in their 70s. Donating the pieces to an existing institution, such as a university or museum, or to a foundation they are looking to start, the Page Center for Social Justice, is among the possibilities.

Similar to Pilgrim, Diane Page stated that these objects are “a constant reminder that we have to be vigilant,” adding that, “people have become more comfortable of late expressing racist views publicly.”

Most Jim Crow era items do not find their way to auction houses and instead are bought and sold at flea markets and antique shops all over the country. Diane Page noted that she and her husband purchased an illuminated Greyhound bus “colored only” sign in Anaheim, California, back in the 1990s, and “it is now worth five times what we paid.” The rise in prices has created a burgeoning industry in reproductions of “colored only” and other reminders of segregation, and many of the replicas are intentionally aged to falsely give the impression of authenticity. “A lot of the metal and ceramic pieces you find for sale were made in Asia, particularly Taiwan,” Pilgrim said.

Identifying what is authentic and what just looks that way is not always easy, according to Raka Nandi, collections manager at the National Civil Rights Museum, in Memphis, Tennessee. “Klan robes, for instance, are identifiable by the cloth, the design and the sewing,” Nandi said, and she performs chemical analyses on the metal, ceramic and paper objects acquired by the museum to provide certainty that objects displayed there actually date from the historical era.

Like those at most museums, the National Civil Rights Museum’s collection is composed principally of items donated rather than purchased. The majority of those donations are from whites who found something in the attic or inherited something. “They want to get rid of these things, because they make them feel uncomfortable,” she said. “One woman in New Hampshire told me, ‘My mom had this Mammy doorstop, and I inherited it, but I don’t want it. Another woman found a Klan robe in a box in the attic. It had been kept in the family for generations. She had it dry-cleaned before sending it to us.”

Besides Alan Page, other well-known African Americans, including Whoopi Goldberg, Oprah Winfrey and Bill Cosby, have built collections of segregation era objects. Diane Page noted that when she and her husband were first married, they had a couple of Andy Warhols on the wall. “We didn’t know anything about art. I think one of the Warhols was a Marilyn Monroe,” she said. “A friend who had been raised in the South came over to our house, looked around and said, ‘What represents your African-American culture to your children?’ She gave us a box that contained pencils with African-American heads and some books of poetry by Paul Laurence Dunbar, an African-American author and poet whom we never had heard of.” That started the Pages on a process of learning and collecting.

And, it isn’t just the wealthiest and most celebrated African Americans who are buying these objects. Elizabeth Abel, an English professor at University of California, Berkeley, noted in her 2010 book, “Signs of the Times: The Visual Politics of Jim Crow,” that the growing African-American middle class has used some of its expanding wealth to acquire and preserve these artifacts of its heritage.

Still, surrounding yourself with objects that, at best, hurt your feelings and generally demean your existence seems to run counter to other trends in American life. Over the past few years, calls for the removal of Confederate flags, statues and memorials in public spaces — many of which were erected during the Jim Crow era— have grown louder, leading to the removal, since 2015, of more than 50 of these monument, taken down by municipalities and put in storage. However, according to the [Southern Poverty Law Center,] https://www.splcenter.org/20180604/whose-heritage-public-symbols-confederacy) hundreds more remain. Still, those 50 or so are a start, as these emblems of slavery and oppression serve as a painful and daily reminder of when the law openly favored whites over blacks. When Barack Obama was president, he said on numerous occasions that Confederate flags and statues belong not in public spaces but “in a museum,” where they can be studied as historical artifacts. The problem of what to do with some of these artifacts is probably one of the reasons that more haven’t been removed. Those clamoring for their removal just want them gone from sight.

Pilgrim noted that one city offered him two monuments, but he had no place to put them and didn’t really want them anyway. He stated that famous African-American collectors of Jim Crow era objects have received outsized attention, but the majority of buyers are white, and their reasons for purchasing these types of objects are varied; Some did it because they want to demonstrate that they are not racist, some because they are racist and identify with the sentiments (“a lot of the newer reproductions are actually much harsher in their messages than the old ones”), and some because signs and product images from the past strike them as cool and retro, very ironic. The manufacturers of reproduction racism are feeding all these audiences.

One might wish that we could throw away large chunks of American history, and, in fact, many Southerners did discard those old signs and KKK robes and posters, but others scavenged the junkyards for them, bringing them to market. Capitalism so often seems to destroy the past, but also acts to preserve it. As much as we may try, we cannot edit American history and the objects created during the more painful moments of that history; instead, we can try to put them in context.