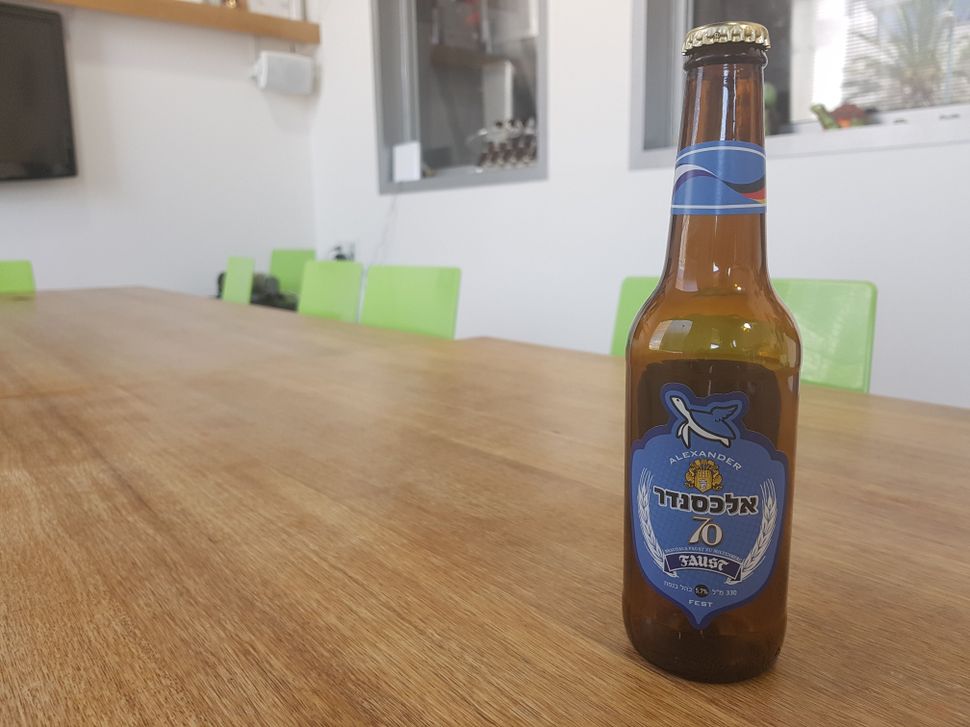 What better way to celebrate Israel’s 70th anniversary this summer than a one-of-a-kind cold one? To honor Israel’s septuagennial, the German Embassy in Tel Aviv led an initiative to craft a commemorative brew, one of several projects the embassy is doing to mark the occasion.

The beer, simply named “70,” is a collaboration between Israel’s Alexander Brewery and Germany’s Faust Brewery. The final product will get its inaugural tasting at a special ceremony at the German ambassador’s residence in Herzliya on Thursday. Afterward, it will be available in stores and bars across Israel.

The German Embassy didn’t fund the beer itself, but proposed the idea and helped arrange the cooperation of the German and Israeli brewers.

“It was our initiative to bring those people together,” said Martin Giese, a spokesman for the German Embassy in Tel Aviv. Beer, he said, is quintessentially German. It’s a key aspect of the nation’s culture, which it seeks to share. Germans consume over 26 gallons of beer per capita annually, and Germany’s famed Bavarian beer purity law, the Reinheitsgebot, is over 500 years old, and regulates the quality of the country’s more than 1,300 breweries. If there’s one thing Germany can Israelis as a birthday present, it should be beer.

“Beer is something that brings people together in all countries, and we knew that in Israel there is a vibrant craft beer scene and we knew of Alexander Beer because we like to drink it,” he said.

The Alexander Brewery was among the pioneers of Israel’s burgeoning craft beer scene. For the country’s first several decades, the local beer market was dominated by major labels such as Goldstar and Maccabi. A decade ago, smaller breweries started to appear.

Brewmaster Ori Sagi started out as an amateur homebrewer, a pastime during his former life in Israel’s air force, before launching Alexander in 2008. (It’s named after the Alexander River that flows into the Mediterranean just south of the brewery. The company’s winged turtle logo pays homage to the African softshelled turtles that are native to the river, and to the brewery’s ethos: “Good things are done slow.”) The first bottles started hitting the shelves in 2010. Since then Alexander has racked up a slew of awards in international beer competitions, including a gold and two silvers at the 2017 European Brew Star.

Today, Alexander rolls out approximately 13,000 gallons per month, mostly the brewery’s six mainstay labels: a blonde ale, an amber ale, a wheat beer, a porter, a strong golden ale and an IPA. A couple times a year Sagi rolls out special edition or seasonal batches.

The German embassy reached out to Alexander with the idea of collaborating to make an Israeli-German beer, and Sagi paired up with Faust, a brewery founded in 1654 in the southern German town of Miltenberg.

“We thought that bringing those two together, hundreds of years old tradition of German craft beer-making with a company that’s almost 400 years old and the new, beer start-up, if you will, that sort of symbolizes the cooperation between Israel and Germany,” said Giese.

Sagi and Faust’s chief brewer Cornelius Faust conceived of the beer ahead of the latter’s arrival in June to concoct it at Alexander’s facility. The variety they settled on is known as Festbier, which are hay-colored, malty flavored beers with only slight bitterness that are mainstays at Oktoberfest in Munich.

“We went in general with a Festbier style, and we’re doing the Festbier suited to us,” Sagi said. “We incorporated Israeli-grown wheat, which is an ingredient that doesn’t typically exist in this type of beer.”

Faust came and applied the traditional, more painstaking German method of brewing. Sagi described the final result of “70” as having a light body, and a biscuity malt flavor enhanced by the delicate citrus notes of the Saphir and Hallertauer hops.

The “70” label embodies that. It is emblazoned with the Israeli and German flags, as well as Alexander’s flying turtle logo and the Faust Brewery crest. The initial batch of 2,000 liters will be sampled at Thursday’s launch ahead of its dispatch to retailers at the end of the month.

But Sagi is certain “70” won’t be a one-time brew: “Because I believe it will be very good, I am sure we will make more.”