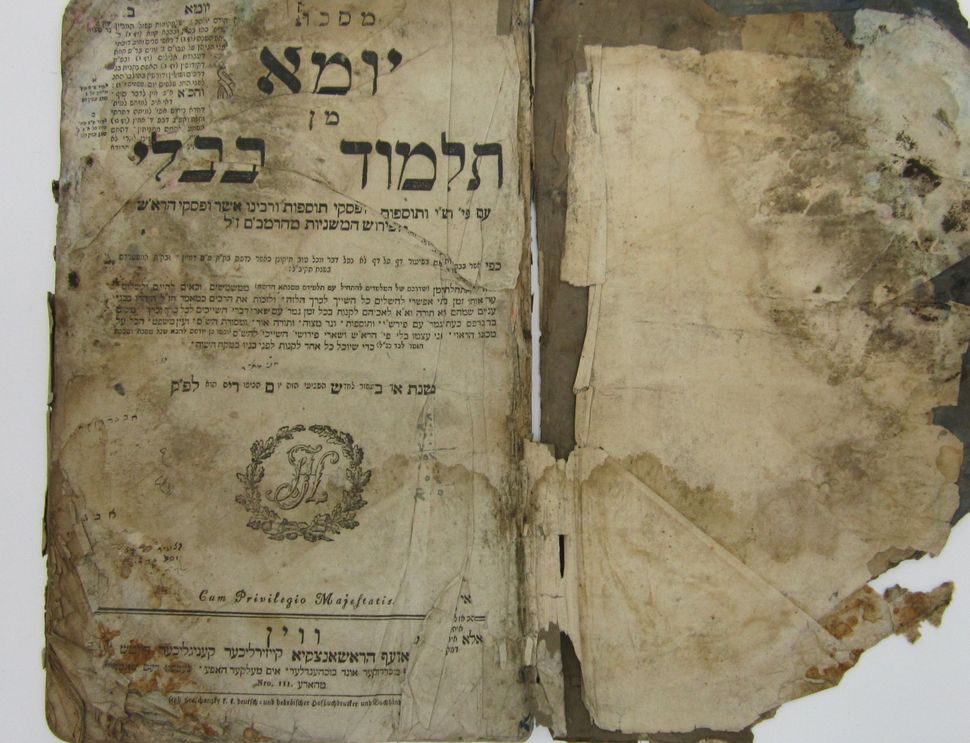 A 1793 Talmud from the Iraqi Jewish Archive before its restoration. Image by U.S. National Archives

The Forward recently published an investigative series on the Iraqi Jewish Archive, a trove of items from Iraq’s exiled Jewish Community currently in the United States. Read all three parts: “The Last Relics Of Iraq’s Jewish Past Are In America. Should They Be Returned?.” “In Exile, Iraqi Jews Are Desperate To Reclaim Their Artifacts — But So Is Iraq” and “The Iraqi Jewish Archive Could Reshape Foreign Policy. But Its Future Is Uncertain.”

(JTA) — The State Department says it is working with Iraq to extend the stay of a trove of Jewish artifacts from the country, while a bipartisan group of senators introduced a resolution recommending that the items not be returned as planned in September.

“We continue to work with the Government of Iraq and relevant stakeholder[s] to extend the exhibition in the U.S.,” a State Department official told JTA in an email on Thursday.

Last year, the State Department said that it would return the Iraqi Jewish Archive in September 2018, to the dismay of activists who argue that the collection of thousands of Jewish religious and personal items should be accessible to the Iraqi Jewish community, which fled the country amid anti-Semitic persecution.

On Wednesday, following discussions in the Senate, a group of lawmakers introduced a resolution recommending that the U.S. renegotiate the archive’s return and keep them in the United States.

“These invaluable cultural treasures like a prayer book and Torah scrolls belong to the people and their descendants who were forced to leave them behind as they were exiled from Iraq. The State Department should make clear to the Iraqi government that the artifacts should continue to stay in the United States,” said Senate Minority Leader Schumer, who has been active in arguing for the archive not to be sent back.

Toomey noted that he had introduced a similar resolution along with Schumer and Blumenthal in 2014 that was unanimously passed by then Senate.

“It makes no sense for this material to return to Iraq when the vast majority of Iraqi Jews and their descendants live in the Diaspora,” he said in a statement.

In 2003, U.S. troops discovered the archive in the flooded basement of the Iraqi secret service in Baghdad and brought it back to the United States.

The items include books, religious texts, photographs and personal documents left behind by Jews who fled the country amid intense persecution by late dictator Saddam Hussein. Under an agreement with the government of Iraq, the archive was to eventually be sent back there.

The Iraqi Jewish Archive was found in the flooded basement of the Iraqi intelligence services in Baghdad in 2003. This photo shows items before they were restored by the U.S. (National Archives)

The U.S. government spent over $3 million to restore and digitize the archive, which has been exhibited across the country. The trove includes a Hebrew Bible with commentaries from 1568, a Babylonian Talmud from 1793 and an 1815 version of the Jewish mystical text Zohar.

In addition to saying the artifacts should be kept accessible to Iraqi Jews, activists also question whether Iraq would properly take care of the items were they to be sent back.

Iraq and proponents of returning the archive say it can serve as an educational tool for Iraqis about the history of Jews there and that it is part of the country’s patrimony.

Read the Forward’s series on the Iraqi Jewish Archive: “The Last Relics Of Iraq’s Jewish Past Are In America. Should They Be Returned?,” “In Exile, Iraqi Jews Are Desperate To Reclaim Their Artifacts — But So Is Iraq” and “The Iraqi Jewish Archive Could Reshape Foreign Policy. But Its Future Is Uncertain.”