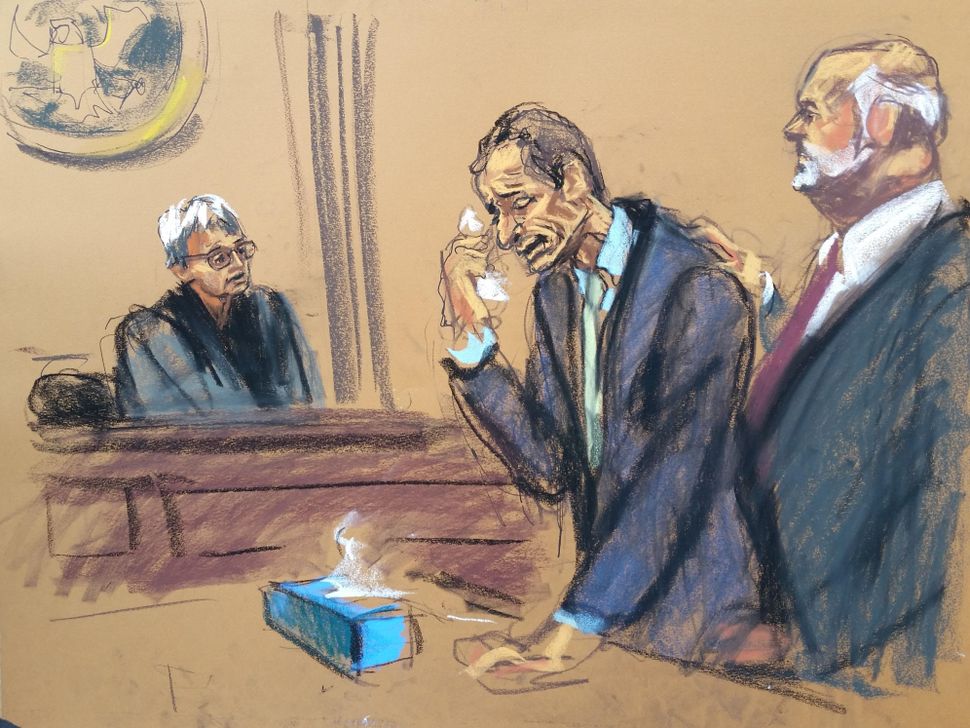 Disorder In The Court: Anthony Weiner breaks down. Image by Courtesy of Jane Rosenberg

Since the 1980s, the Brooklyn-born courtroom artist Jane Rosenberg has won attention for her trial portraits of Bernard Madoff, Woody Allen, Leona Helmsley, Anthony Weiner and others, broadcast over all major TV networks. Most recently, her sketches from the prosecution of Harvey Weinstein in downtown Manhattan for rape and other crimes went viral for their batrachian images of the movie producer. Trained at the State University of New York at Buffalo and the Art Students League, Rosenberg is also a painter of cityscapes. Recently, Rosenberg spoke with the Forward’s Benjamin Ivry about the trials of being a courtroom artist. 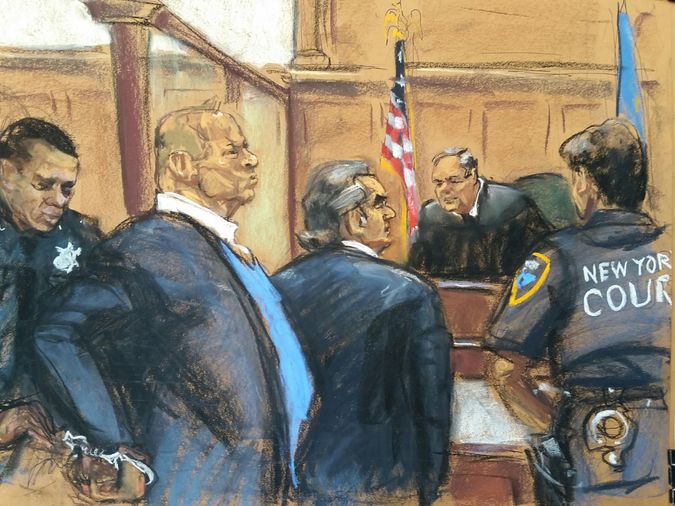 The Defendant Is Present: Harvey Weinstein appears in court. Image by Courtesy of Jane Rosenberg

Benjamin Ivry: Your artwork from the Harvey Weinstein trial focused on the producer’s belly as the salient point: Al Hirschfeld said that in his quick drawings from life inspired by performances, he tried to capture one main feature of any subject. Is courtroom art like that?

Jane Rosenberg: I can’t say I just went after that one main feature. I had to try to get his face in there, too, in just a few seconds as I saw him walk by. His belly was thrust forward, and it was very difficult, very challenging. His whole appearance was 10 minutes, and I did two sketches in that time and I didn’t see him all that time. [Weinstein] was so dazed and confused, he walked right towards where I was. I guess I was looking down at that belly. Then he went back and sat on a bench. I tried to capture it all the best I could, in the quick moment I had. 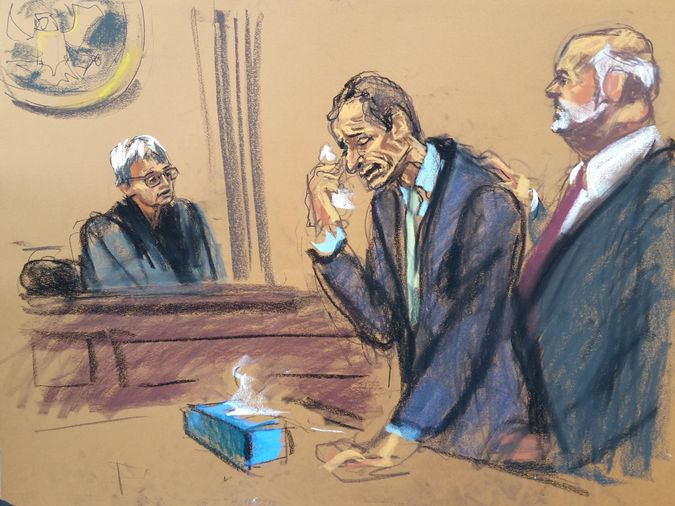 Disorder In The Court: Anthony Weiner breaks down. Image by Courtesy of Jane Rosenberg

Another widely reproduced courtroom sketch of yours shows Anthony Weiner sobbing at his sentencing after pleading guilty to a felony sex crime. He clutches tissues like a stage prop. Was this an allusion to the histrionics of the occasion, or did Weiner’s remorse appear genuine?

He was crying. I can’t get inside his heart and say how genuine his feelings were. [Weiner] was definitely upset and was holding the tissues. He was broken down and looked like a broken man. 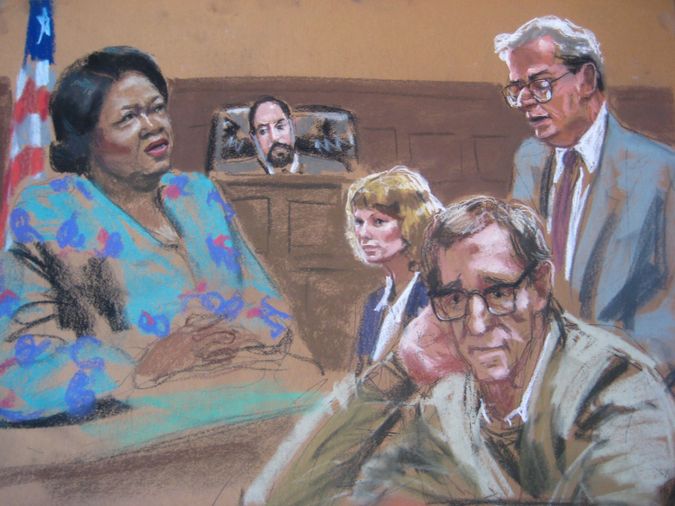 Crimes And Misdemeanors: Woody Allen has his day in court. Image by Courtesy of Jane Rosenberg

In 1993, when Woody Allen lost to Mia Farrow in a child custody battle, you depicted Allen with his attorney, Elkan Abramowitz. Since Allen’s face was already known to you from films, did that change your approach? Since he generally looks miserable on and off-screen, how could you depict any particular stress or sadness he might have been experiencing at the hearing?

[Laughs] You’re making me laugh. I don’t go sketching and thinking that what he looks like in the movies is what he will look like in the courtroom. Most people look different in courtrooms, under fluorescent light, than [they do] in the movies. People usually look miserable in courtrooms; they are horrible places where people’s lives are unraveling. So in that sense, I did not see Woody Allen as any more miserable in the courtroom. That’s how he looks. His characters are always basically the same, and he was the same character you see in his films.

In 2009, when Bernard Madoff was sentenced for cheating investors, your image shows an apparently unrepentant, grandfatherly character with excellent posture. Was he really so benign?

He was the ultimate con man, there you go. His insides were completely different from what his outside appeared to be. I couldn’t see [evil] looking at him. I understand how countless people were deceived by his external appearance.

In 1992, when the businesswoman Leona Helmsley (born Lena Mindy Rosenthal) was convicted of tax evasion, did her reputation for tyrannical behavior, earning her the nickname Queen of Mean, make it possible to start with a neutral impression of her?

I think I was a queen of mean myself in the way I portrayed her. That’s how I saw her. I am trying to be like a journalist and tell the truth, but I guess I am an artist, and in zipping along, my mistakes may have some underlying psychological theory to them. 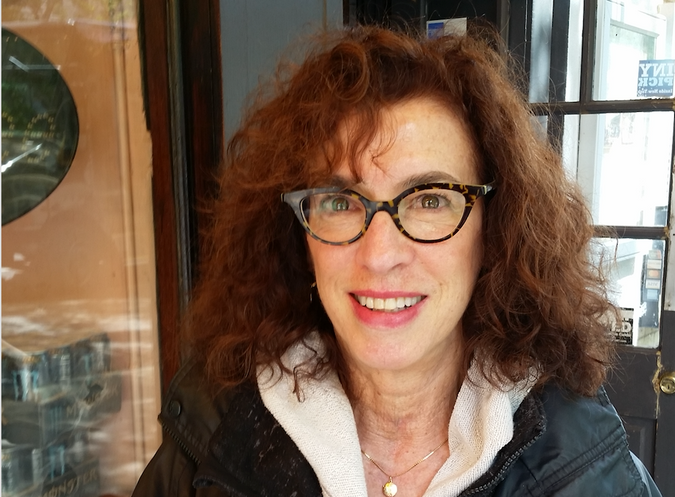 Out Of The Courtroom: Jane Rosenberg has gained acclaim for her portraits of such figures as Woody Allen, Bernie Madoff and Leona Helmsley. Image by Courtesy Of Jane Rosenberg

In 2016, fans of the New England Patriots quarterback Tom Brady, who was in court for a hearing, mistook a lightning-fast trial sketch for an officially approved flattering portrait. After the hate mail arrived, you redid a portrait of Brady looking more conventionally handsome. Were you trying to placate the mob, or expressing genuine remorse, or just implying that Brady does indeed have boringly regular features with no intriguing expressionist elements?

I think I felt horrible that people were so disapproving of the sketch, although some did approve. I am a sensitive artist, and I find it terrible to be criticized. For myself, I want to do better art and make things look more like a person.

Your instructor at the Art Students League, David Leffel, is Brooklyn born and, according to one website, “raised with a strong Russian Jewish heritage.” Leffel follows in the tradition of Rembrandt with slow and careful study of light and shade. What did you learn from Leffel that was so different from the pathway you took as an artist?

I had to keep evolving. I couldn’t stay with Leffel forever. I had to be myself. He was my first influence, I loved his paintings, and I chose to study with him. I kept going as an artist. I don’t analyze art, it just kind of comes out of me. I keep trying to do better, and grow and change over the years.

Last year, the Swiss courtroom artist Patrick Tondeux spent months in Champ-Dollon prison in Geneva, drawing inmates and guards for a book. Would you consider such a project, or are trials gruesome enough without following defendants to jail?

I would like that, actually, to go to a prison and feel safe and go further and see what it is like, not as a prisoner myself. I actually did sketch prisoners at the Spofford Juvenile Detention Center in the Bronx in the 1980s. But I am interested in the inside of the jail. I am married to a lawyer who is a criminal defense attorney. One thing I love about being a courtroom artist is that I am safe and protected by marshals. I don’t always feel that way if I am outside sketching something on the street, where I don’t have the safe feeling I have in courtrooms.

In 2015, when the cartoonist Bernard Verlhac, known as Tignous, was killed in the shootings at the offices of the French satirical weekly newspaper Charlie Hebdo in Paris, the French minister of justice praised him as belonging to “that lofty and great line of courtroom artists.” Do you see courtroom illustration as a “lofty and great” tradition?

That’s beautiful. I think it’s not as respected as it should be. I think it’s different in Europe. In England they are not allowed to bring in art materials and have to draw from memory. How can they go outside and create the scene? I really draw from the moment as it is happening. I really need that to energize me.