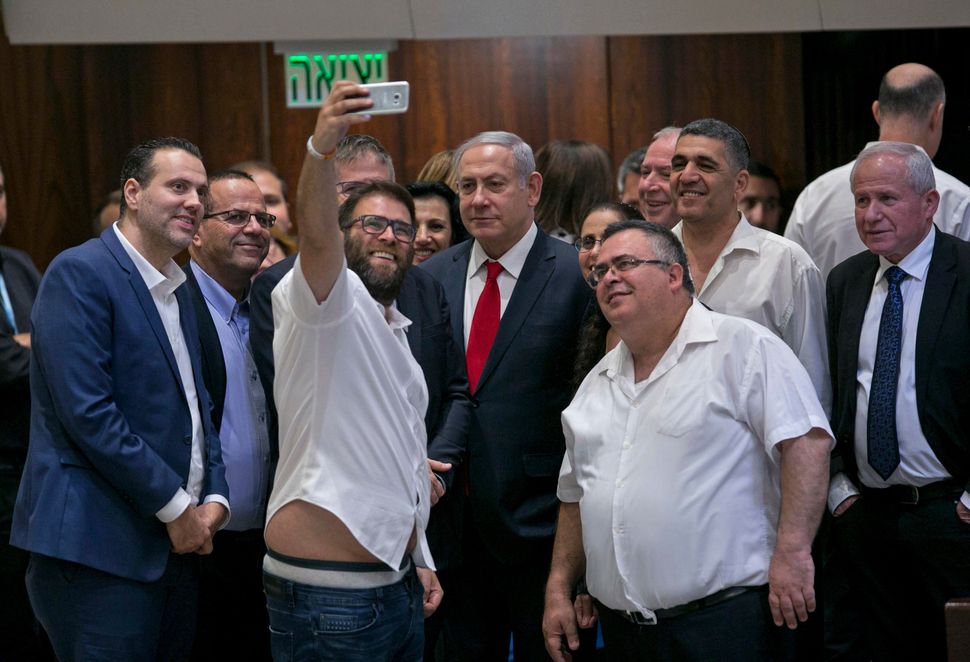 A veteran cartoonist was fired from a prominent Israeli magazine this week after publishing a caricature criticizing the Israeli government for a controversial law passed last week defining the country as a Jewish state.

Avi Katz, a former staff cartoonist for bi-weekly Jerusalem Report, had been working as a freelancer for the magazine since 2012 until his dismissal this week, days after the cartoon ran.

In Katz’s cartoon, the lawmakers are caricatured as pigs, under a line from George Orwell’s “Animal Farm” — which chronicles the failure of a planned utopia — reading “All animals are equal but some are more equal than others.”

Katz said he saw Fitoussi’s photograph, which was published by the Associated Press, “and it just looked like pigs to me.” He said he “very quickly, half-tracing just redid the drawing slightly with pig’s faces, it seemed to me so obvious, it was almost as if I was explaining someone else’s joke.”

“It seemed to me the joke was there in the photograph already,” he said.

Hazan — a first-term Likud lawmaker who has made headlines for mocking a disabled opposition lawmaker, challenging a Jordanian lawmaker to a fistfight and taking an unexpected selfie with President Donald Trump last year — called the cartoon “inciteful” and berated the Israeli left for not speaking out against it.

Some Israelis on social media called the caricature’s use of pig’s heads anti-Semitic, but Katz rebuffed those claims.

“For some reason criticizing someone on the left, for example, is not considered anti-Semitism, there it’s just politics,” Katz said. “But if you criticize someone on the right you’re an anti-Semite.”

The new legislation defines Israel as the national homeland of the Jewish people, prioritizes Jewish settlement of the land and downgrades the Arabic language from an official to a “special” language. Critics of the law say it marginalizes the country’s Palestinian Arab minority, which constitutes 20% of Israel’s population, while its proponents say it merely enshrines the existing reality.

The Knesset approved the law last week with 61 lawmakers voting in favor and 54 against. Since its passage, the law has drawn particular criticism from Israel’s Druze community, who are Arab but serve in the military. At least one government minister has called for its amendment, saying the law was a “mistake.”

Katz, who immigrated to Israel from the U.S. and has been drafting cartoons for The Jerusalem Report since its founding in 1990, said his dismissal was a “knee-jerk response” to criticism of his cartoon by the political right.

The Jerusalem Post’s management did not respond to requests for comment.

Katz’s firing from The Jerusalem Report drew fierce criticism among Israeli journalists as an attack on free speech.

The Union of Journalists in Israel issued a statement saying that “harming a journalist for expressing his opinion, particularly when it was approved by their editors, is a dangerous step that we must not accept.”

The Israeli Cartoon Association, of which Katz is a member, said Thursday that Katz’s dismissal is “a most grave matter which is unconnected with political affiliation or artistic taste.”

“Today it’s Avi and tomorrow it could be any one of us,” the organization wrote on its Facebook page.

“I cannot be associated with a publication that dumps a staff member simply because his work has upset some readers,” Watzman said in a letter of resignation. “Journalism, when done well, always angers some readers, and it is the duty of the newspaper or magazine’s editors and managers to stand by writers and other members of the staff when readers complain about the analysis and opinions expressed by its staff.”

Following Katz’s dismissal, Israeli Alliance, a liberal NGO, launched a crowdfunding campaign to support the cartoonist’s work. Within a day the project raised over NIS 70,000 ($19,000).

Katz said that over the years, when talking with fellow cartoonists from around the Middle East, he “had been bragging for years that, terrible as our government policy may be, at least we’re free to criticize it.”