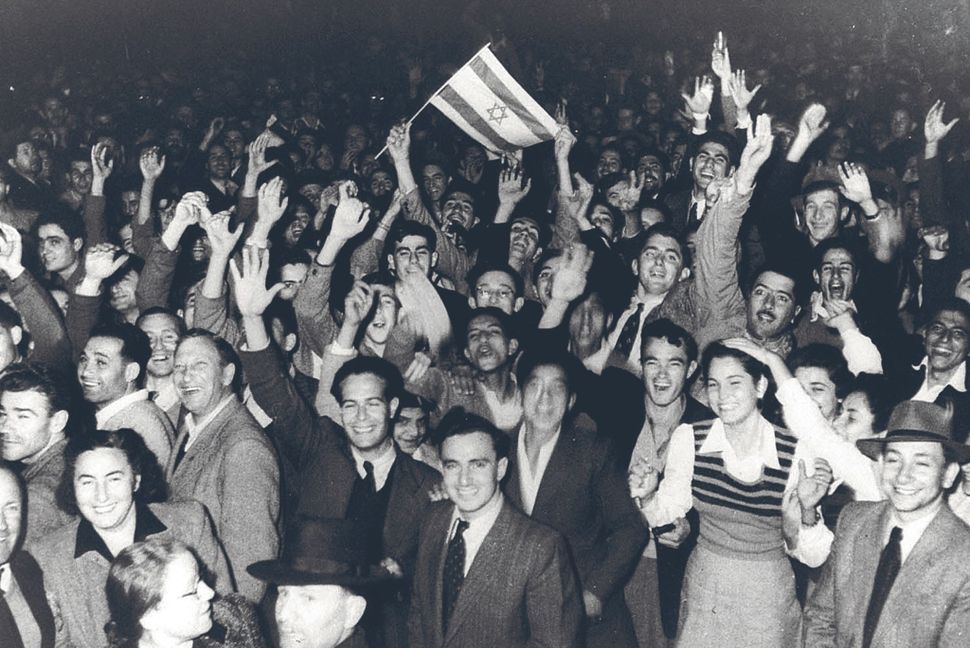 Following Winston Churchill’s prediction in 1942 that the war against fascism would “end with the enthronement of human rights,” the phrase, which had rarely been used in the discourse of international law, began to gain currency.

Policymakers, however, did not agree about the content or form of human rights. Jacob Robinson, a Lithuanian Zionist who would help design the United Nations Commission on Human Rights and serve on the Nuremberg and Adolf Eichmann prosecution teams, pointed out that the Anglo-American Atlantic Charter established the unqualified right of every nation-state to create laws that “may not recognize any human rights at all.” Hersch Lauterpacht, a Polish-born lawyer who would help draft the International Bill of Human Rights and Israel’s Declaration of Independence, agreed that the “Achilles’ heel of the natural rights of man” was the reality that all rights “are subject to the will of the State.” The “ultimate safeguard” for human rights, Lauterpacht maintained, would reside in a body of rules.

In “Rooted Cosmopolitans,” James Loeffler, a professor of history and Jewish studies at the University of Virginia, tells the little-known — and fascinating — story of Robinson, Lauterpacht and three other founding fathers of human rights: Rabbi Maurice Perlzweig, a British Zionist; Jacob Blaustein, head of the American Jewish Committee, and Peter Benenson, founder of Amnesty International. As he corrects the “collective amnesia” that surrounds the historical record, Loeffler makes a compelling case that “the political and moral dilemmas facing Jews today” are exacerbated by a “lazy dichotomy” between nationhood “that is positioned in opposition to the world” and human rights universalism “that pretends to come from nowhere.”

In the 1920s, Loeffler reveals, the (now much maligned) League of Nations came close to addressing a fundamental aspect of human rights. Convinced that Zionism and protection of Jews living in Europe were complementary goals, Robinson enlisted an improbable ally, Weimar Germany, which wanted to assist Germans residing in nine countries, while re-establishing its influence in Central and Eastern Europe. Admitted to the league in 1925, Germany pushed for reforms guaranteeing the rights of minority groups.

In 1929, Germany announced a “Year of Minorities” diplomatic initiative; in concert with the Congress of European National Minorities, Robinson called on the league to fulfill its mandate obligations to assist Jews in Palestine and act on behalf of imperiled Jews in Poland and Lithuania. Determined to retain complete control over their colonies, Britain and France blocked these initiatives in 1930.

Within a few years, Loeffler reminds us, the Nazis came to power in Germany. Surprisingly, league members continued to defend minority rights and in 1933 forced Germany to restore the rights of Jews in Upper Silesia. Germany’s pledge, however, was followed by an announcement that Germany was withdrawing from the league. The Nazis banned the word “minorities,” recognizing only a hierarchy of nations.

Predicated on a theory of reciprocity — I protect your minority, you protect my minority — the Minorities’ Initiative, Robinson quipped, evidently had a codicil: “I hit my Jews, you hit your Jews.”

1948 was a turning point for Jews and human rights. As Israel dealt with Arabs in the Jewish state and the Palestinian territories, it became clear that national sovereignty was both a fundamental source of rights for individuals and groups and a potent threat to them.

Marked by “the tainting of nationalism by the radicalism of Third World anti-colonialism,” Loeffler writes, the 1960s witnessed “the beginning of the end of the grand romance between Jews and human rights.” While Israelis justified the kidnapping and prosecution of Eichmann as a defense against anti-Semitism and a guarantor of Jewish survival, critics asserted that the former Nazi’s human rights had been grossly violated. Israel, Loeffler writes, was acquiring an image as a parochial state, at odds with universalist values.

Most important, the results of the Six Day War stimulated the “increasing demonization” of Israel for denying basic rights to stateless Palestinians. Israelis and their diasporic Jewish supporters maintained that they had to balance national security with civil liberties. But Amnesty International joined the U.N. as a “hostile forum,” blasting Israel for its tribalism. On November 10, 1975, the U.N General Assembly voted 72–35 (with 32 abstentions) to approve a resolution branding Zionism “a form of racism and racial discrimination.”

Loeffler notes that Israelis and American Jews differ about the nature, extent and necessity of violations of the rights of Palestinians. Nor do they agree about whether, as Lauterpacht once maintained, Israelis will be forced to struggle with an issue that “lies so conspicuously on the borderline of law and a most intractable problem of politics,” unless a two-state solution is implemented.

Still, for decades, the U.N. has held Israel to a different human rights standard than the one it sets for any other country. Along with the U.N. and Amnesty International, Loeffler concludes, Israel is a “Prisoner of Zion.” The phrase, he writes, captures how the Jewish state is “the source of heightened Jewish vulnerability and the best solution to it,” a signifier of parochialism and universalism. And so it will remain as long as “Jews and others grapple with the entangled braids of American power, Jewish sovereignty, and human rights.”