I Let My Rabbi Mom Control My Dating Apps 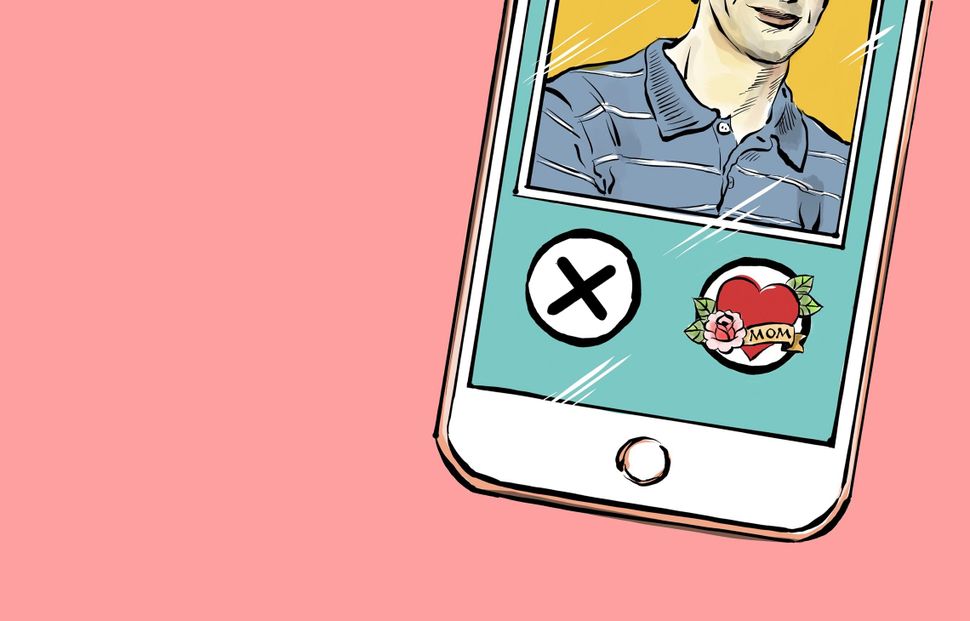 When Beth Singer was a rabbi at her first full-time pulpit, she went into labor when she was about to perform a funeral.

Her contractions were coming 20 minutes apart, so she decided to proceed with the funeral. Jewish funerals rarely last longer than 40 minutes, so she knew she could time one contraction for before the service, one for after and one during a family eulogy.

She performed the service, grabbed a ride to the hospital and had the baby. And I was that baby.

My mom has grown tired of me telling the story of my birth, which I found excruciating as a teenager but now see as an epic origin story, like that of the goddess Athena.

My mom thinks this is in poor taste.“One day I’m going to hear you telling someone that I birthed you into an open casket while chanting el malei rachamim,” she told me.

Listen — we were both there. Who’s to say which story is more legitimate?

Both my parents are rabbis. My parents and I live on opposite coasts, and sometimes it feels like we’re chafing at the natural way of Jewish parent-child relationships by accepting that distance. I called them, about a month ago, with an idea. “Don’t you think it would be fun if I let each of you control my dating apps for a week and then wrote about it?” I asked. “Yes!” my dad said, with the air of a man who had just won a set of steak knives on a game show. “What do you mean” my mom said, testily, “by control? I don’t control anything about your life.”

And so, we began.

I showed my mom our first suitor, Karthik.

“How do we know he’s Jewish?” she asked.

“Why would I want to help set you up with a non-Jewish man?”

“Can I write that? Can I write that you said that, Mom?” I asked, noting in my voice a certain insatiable greed I have grown accustomed to in my brief time as a journalist.

“Yep. You can tell Michael Chabon I said so directly.”

Our first match, a Jew, listed as his employer The Weinstein Company.

“He cannot be responsible for Harvey,” my mom said. But she became disenchanted. “I kind of think the guy to his right looks interesting,” she said. “He looks like your type. Can we write to Michael and ask him to send on the information about the guy to his right?”

Jake, my next match, stated in his profile that he is a nationally ranked figure skater. “Nationally ranked? Who’s nationally ranked him?” she said. We continued to swipe at the pace of a drip coffee machine, a speed I had never experienced in the modern dating world. “What’s with these guys?” she exclaimed, having swiped through exactly four men. “I wish someone would just say, ‘I am not a schmuck.’

We connected with a 29-year-old lawyer who identified as a “foodie.” We agreed that my mom should text me the exact words she wanted me to send. “Hey, Evan, I’m Jenny,” she wrote. “I’m a foodie, too! And a walker. And I LOVE walking to food. I also like spicy foods and some say my personality is pretty spicy, too. Should we talk more?”

Suddenly, the flaws in my plan appeared. The tenor of the message — the punctuation, the wordplay – had a distinctly concussed vibe. Sending that message seemed like the equivalent of blindfolding myself and wandering into a batting cage. I sent it.

Scrolling through a few more profiles she became, like the many women in whose former paths she tread, incensed. “What are these pictures?” she hissed. “I don’t think seeing them skydiving or dressing in a kimono is going to help me.”

We came to the end of our first evening of swiping. “He’s got a lot of hair,” she said of our final prospect. And then I felt the mood between us turn cold. “Why are we doing this?” she asked. “I could ruin your life. You could marry this man, have three children, and divorce him and I’d be responsible.”

“But you wouldn’t be responsible,” I said.

“Yes I would! How can anything good come of this? You’re starting under false pretenses.”

“How would you feel if he and his friend were drinking and just laughing their heads off, saying, ‘Oh, Jenny — let’s string her along”?

I explained to her my opinion — that flirting online is hardly different from doing so in a bar, where there is some expectation of duplicity. This moral debate was sidelined by the profile of a person named David, who wrote in his bio, “I have a very strong Jewish identity” and also, “I make my own jams.” My mother was torn.

“I could never go out with this facial hair,” she sighed. We flicked to a second photo, where David was clean-shaven. “I wish I’d never seen that first picture!” she cried. She texted me this message: “Hi David, I’m Jenny. I have a strong Jewish identity, too. Let’s hear about yours. Also, what do you mean by jams?

“Let it go on the record that being Jewish is not sufficient,” my mother said on the second day, rejecting a Jewish lawyer. When we found someone who had multiple degrees from Harvard, she remarked: “Why does he say he’s ‘awesome’? This is a very bad picture of him.” She connected me with an attractive 22-year-old who bartends in Broadway theaters. “You said you like someone with good stories, I have pretty good stories,” she messaged. Then she followed it up with a three-paragraph anecdote about “Seinfeld.” Furious, I broke the rules of the experiment and took control of the conversation. This person had free access to alcohol and live theater — it wasn’t a job for an amateur. We messaged back and forth, and he let our conversation die. It was no longer possible to avoid the reality that the 22-year-old bartender liked talking to my mom more than to me.

“I think you need someone who at some point in their profile indicates intellect,” she said the next day, instructing me to pass on a 31-year-old who “likes to stay fit.”

We matched with Steven, a 24-year-old Ivy League law student who described himself as a “hopeless romantic.” One of his photos featured him attending a Friends of the Israel Defense Forces gala. “Hi, Steven,” she dictated to me. “I hope you’re having a good day. I love Israel to the depths of my soul, and I am also very critical of many government policies. How do you feel about that?” Responding to a long text back, my mom wrote a message that included a lengthy family story.

“James looks like a recovering drug addict,” she announced on day four. I’d sent her a series of screenshots from Coffee Meets Bagel for her to prescreen, and she told me she’d call me back after making some pastoral calls. I crouched in a conference room, pretending that asking my mom to Cyrano de Bergerac me from across the country was an appropriate work activity.

“Has the French boy responded?” she asked.

We considered this silently. “I’m tired of these boys,” she told me. “Let me see your profile.”

I sent her my first picture — me on my 21st birthday with my best friend. “Hmm,” she said. “Katya is pretty dolled up here. What if they like her more than you?” I sent her my next photo. “Your hair is a different color in both of these pictures,” she observed. “They’ll say to themselves: ‘I don’t even know who this girl is — what color is her hair?’”

I sent her the picture where my hair looks the best: I’m standing with my arm around a WASP-y college friend, beaming. “I would crop Jillian out,” she said, breathlessly. “My eye is drawn to Jillian because she’s a classic American blonde. Crop her.”

“Mom!” I exploded. “Do you want to be quoted telling me to crop my beautiful blond friend out of a photo so men will pay attention to me?”

And then, finally, it happened. Someone who had messaged with my mom asked us out. We said yes. We made plans.

We met for drinks.

“So you’re a foodie,” he said, by way of introduction.

A long pause followed. And then I remembered! He thought I was a foodie because my mom told him I was while impersonating me. So I told him about the circumstances that had led to us drinking cocktails as the sun set over Chelsea.

He was not amused. Actually, he seemed somewhat revolted.

But why, I thought, would anyone be revolted to find himself on a date with a woman who is secretly a reporter who cat-fished him using her rabbi mom?

I called my mom with the bad news. “Yes,” she said. “That’s what I’ve been saying. It’s completely unethical. It’s just plain wrong.” Then she added, “There is no defense for what you did.” I forgot that my mom, a rabbi, is fond of ethics.

And I am too. I really thought that people would laugh gamely when they found out. Instead, it dragged us both into a swirling moral vortex in the name of Jewish continuity. I had gambled both of our honors and lost, I thought. I’d done what the Talmud says is the worst thing you can do to other people: Embarrass them.

“So anyway,” my mom said, brightening, “Did Alexandre ever text you back?”

I Let My Rabbi Mom Control My Dating Apps