From 1898 — Why Plagues And Fires Make A Good New Year 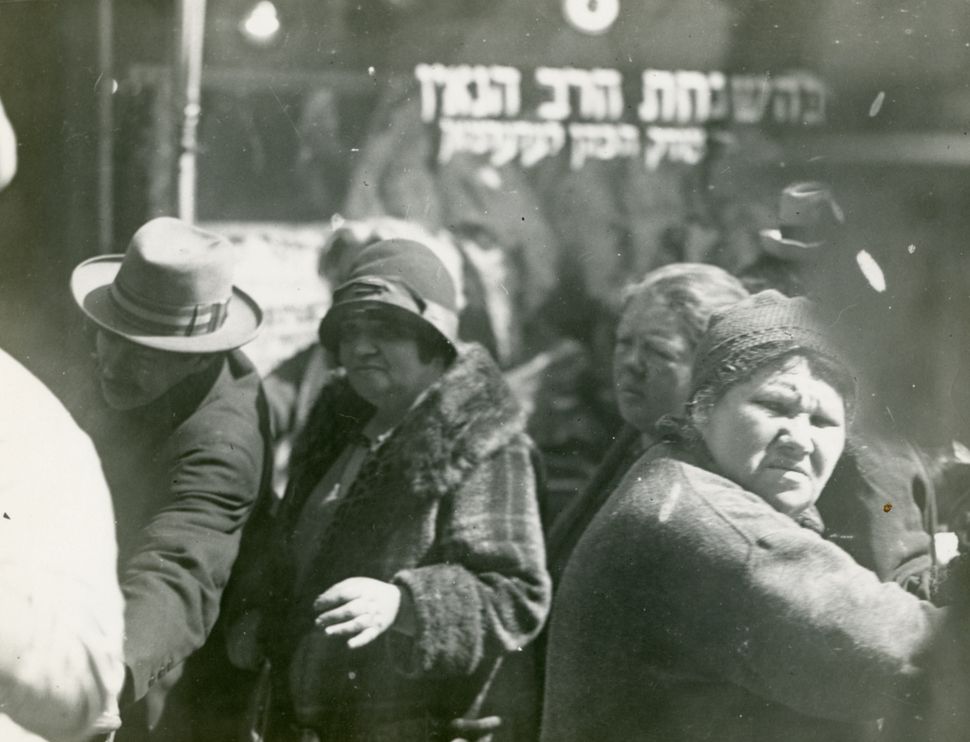 The Lower East Side Image by Forward Association

Rosh Hashanah! Thousands of poor, addled, hapless but sincerely devoted Jews stand and plead with the Master of the Universe for a good year. Surrounded by all manner of hypocrites who petition, weep and exhort alongside them — folks who strive to cut a ‘“deal” with their God. They point out how three days a year they worship him, so therefore he, their God, should do similarly for the remaining 362. These people, with their clean-shaven chins, bellies jammed full of foods God demands we not eat — don’t ask why — clothed in unacceptable shatnez wool and linen mixtures. They’ve got Sabbath day sales on their minds, last Sabbath’s swindles and next Sabbath’s smoke and mirrors. They’re feeling impassioned; they’ve cut out the thieving, robbery and murder, so the police are out of the picture for now. These posers stand praying in front, ahead of the poor folks for the most part, beseeching and keening along with them for a great new year!

What’s a good year to them?

Sickness and pain satisfy the doctor. Ten times the teeth problems could make a great new year for the dentist. The pharmacist needs what the doc needs in the form of a plague to support his dispensary. Starvation in Russia and India is awesome for the wheat dealers and possibly even for the bakers, who, even more, need the perfect gift of the candy stores where young folks develop their cravings for baked goodies. The Jewish coal sellers need the bitterest, deepest winter frost in which the street-clearing vendors pray to the Master of the Universe for so many blizzards that the elevated railways are covered over, as are the roadway.

And the fire insurance agents — they need huge conflagrations, if at all possible, that enlighten those who can’t see the purpose of fire insurance — massive fires and if possible, a few injured burned folks from each one. There should be a couple of brilliant murders, a hair-raising war, a few assassination attempts, a dozen extraordinary suicides; several mansions should fall in, panic then breaks out in a theater, and a church shall be the site of a lousy accident. Let there be a good “issue” in the November gubernatorial election, let the Prince of Wales come visit: His mother’s death and a few such small news items make a great new year for journalists.

Along with the thrice-a-year religious extremists, thousands of poor, hard-luck folks pray fervently, call out faithfully, beseeching now as always, pleading here as they once did back home — and no one heeds their plea. There’s no response.

Over the years, Rosh Hashanah comes and goes and their troubles multiply. The One Above can’t decide whom to answer first, and the destitute are as widespread as sand at the beach, counted out once a decade by the census, as they gradually enter the undertaker’s oversight buried one atop the other, a fathom deep, so that room is left for the next generation.

They pray sincerely and soberly each Rosh Hashanah for a good year, but remain the same forsaken ones as before. There’s no cradle to peer into at home anymore, while at the cemetery there are two bitty graves to visit. A shirt’s gone from the armoire in the bedroom, while at the “office” there’s one more ticket for the pawnshop. The empty closet’s a fresh wound still, and a new boarder has already shown up at the house. The atmosphere gets compacted, and all hope stomps out of the heart, leaving room for new misery to grow, with its demand for even more space.

When you tell them they can have agency, can be self-sufficient, they don’t believe it. They stand and pray till they fall out, forever putting a lid on it all.

Morris Winchevsky (1856-1932) part of the Yiddish literary group known as the ‘sweatshop poets,’ was acclaimed not only as one of three founding editors of the Forverts, but also as the grandfather of Yiddish proletarian literature.

From 1898 — Why Plagues And Fires Make A Good New Year