6 Surprising Ways To Use A Shofar 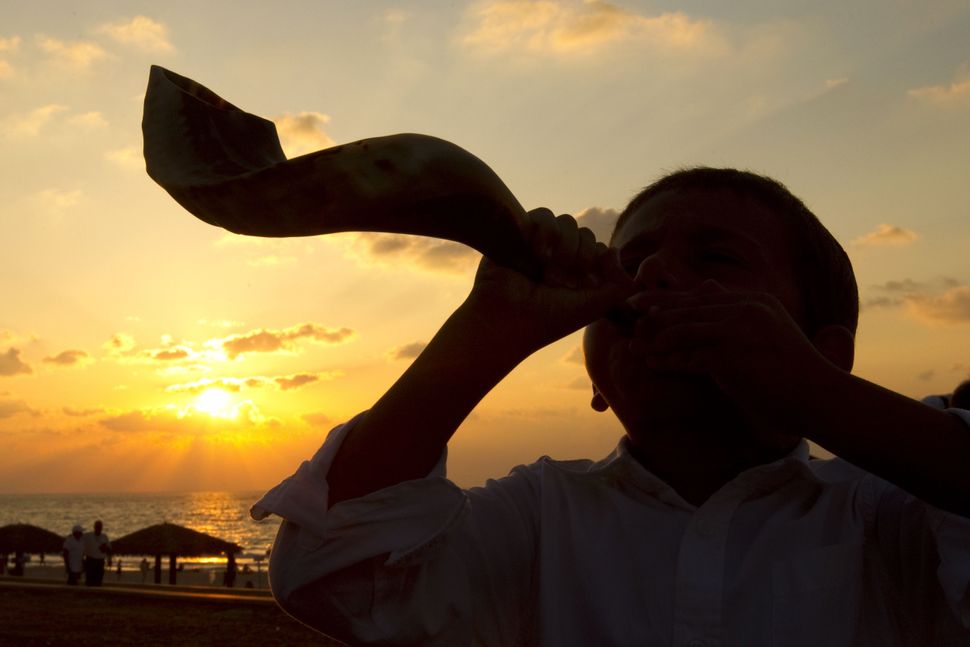 Being little more than a husk of keratin hacked off the head of a ram, the shofar is not a very versatile instrument. Because there’s no real mechanism to alter pitch within the hollow horn, the burden is on the blower, who can modulate tones using his or her lips, teeth or tip-of-the tongue. For this reason the shofar won’t be joining the wind section, or seeing extensive use outside of religious ritual anytime soon. Still, the shofar has popped up in some interesting places over its thousands-year history. Here are some of the highlights:

In 2005 Madonna (who by then was sometimes going by Esther), recorded the song “Isaac,” which sampled “Im Nin’alu” a popular Israeli song based on a 17th century Hebrew poem. The six-minute track made for the album “Confessions on a Dance Floor” seems designed to pander to the club scene in Tel Aviv, but conjures up a bit of the Days of Awe with some unmistakable shofar blasts in the mix. Madonna, a Catholic girl from Michigan, even brought along kabbalist Yitzhak Sinwani to play the calls when she toured the album in 2006. This makes Sinwani maybe the only person in history to have “auxiliary shofar” on his resume.

In the opening notes of “West Side Story”

On a narrative level, “West Side Story” looks like one of the most goyish entertainments ever devised by a group of Jews. Puerto Ricans on one side and Polish-Americans on the other. Knife fighting under an overpass. These are not the typical recreations of nice Jewish kids. But, when you discover its early conception (it was called “East Side Story” and featured a Maria that was a Holocaust survivor) you can see why Leonard Bernstein, the scion of Orthodox Russian Jews, evoked the tekiah g’dolah before the opening scuffle between the Jets and the Sharks.

On “The Howard Stern Show”

The King of All Media has had a number of contests on his radio program over the years — most of them ribald. Among the more surprising ones was a segment called “Blow the Shofar” where popular songs played on the shofar had to be identified by listeners. Most recently, longtime Stern staff member Benjy Bronk has been heralding his appearances on the Sirius platform with his personal shofar, making himself even more annoying to Stern’s diehard fan base.

The Forest Moon of Endor, the nest of an alien queen and the beachside cities of civilized apes have all featured the drone of the shofar. The instrument’s early origins in film make a bit more sense. Elmer Bernstein in scoring Cecil B. Demille’s “The 10 Commandments” (the second one, with sound) incorporated the bugle calls that would prove handy to Joshua at Jericho. The same sounds that Bernstein recorded reappear as the teddy-bear like Ewok’s calls to battle in “Star Wars: Return of the Jedi.” Composer Jerry Goldsmith also leveraged his Jewish upbringing, using the shofar in the scores for “Alien” and “Planet of the Apes.”

Because the shofar is of no little significance in scripture, Christian composers imagining the Second Coming or events in Jesus’ life have used shofar blares in their orchestrations. English composer Edward Elgar (who wrote everyone’s graduation march, “Pomp and Circumstance”) made room for it in his oratorio “The Apostles,” though the part is usually played by flugelhorn. In Berlioz’s “Requiem Mass,” the shofars sounds as if they portend the end of the world. The instrument itself, was played by trumpeter Lester Bowie in the Art Ensemble of Chicago.

Experimental music luminary John Zorn’s Tzadik records released a 2014 album in which Zorn played alto-sax and shofar. But even Zorn’s commitment to the old ram’s horn pales in comparison to that of Alvin Curran, an American born, Rome-based artist who has been on a 30-year crusade to prove the shofar’s worth as a virtuoso instrument. His project, “Shofar” (for which an album, “Shofar Rags” was produced by Zorn’s label) partners the flatulent bursts of his kudu horn with electronic noise, the whir of air-slicing bullroarers and the groan of corrugated cardboard tubes. It’s not exactly easy listening and it may not convince you that the shofar is ready for prime time, but it’s certainly entertaining.

6 Surprising Ways To Use A Shofar