The Secret Jewish History Of ELO 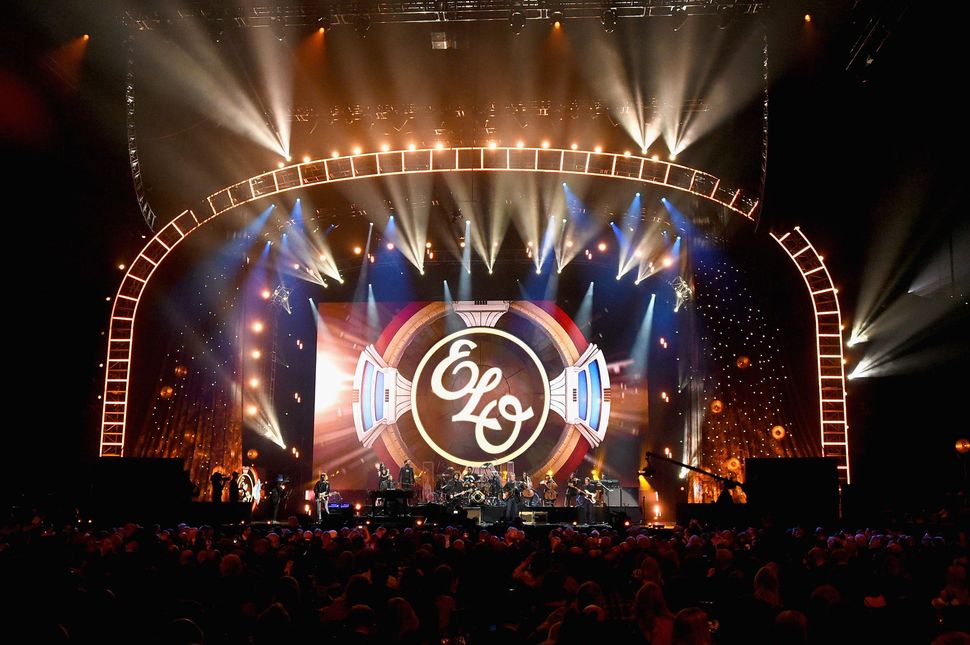 ELO aka The Electric Light Orchestra Image by Getty Images

For the first time in nearly 40 years, rock auteur and Hall of Famer Jeff Lynne is touring North America with his band ELO, the English group that churned out a bevy of huge pop hits — including “Evil Woman,” “Livin’ Thing,” and “Mr. Blue Sky” — in the second half of the 1970s. Jeff Lynne’s ELO, as the current group (which features an all-new lineup, other than Lynne) is being billed, swings through New York City this week, playing a hit-filled program boasting its signature blend of rock, pop, and classical sounds at Madison Square Garden on Tuesday and Wednesday, August 21-22, before concluding the tour in Philadelphia on Friday, August 24.

The Birmingham, England-bred Electric Light Orchestra was originally formed in 1970 by Lynne, multi-instrumentalist Roy Wood, and drummer Bev Bevan as an experimental offshoot of the British pop-rock band The Move, of which all three were members. The original mission was to pick up where the Beatles had left off and integrate classical music influences into rock. Within two years, Wood had left the band in Lynne’s capable hands, going off to form his own group, Wizzard. Although more of a chamber-rock group than an orchestra, Electric Light Orchestra’s lineup solidified within a few years to include cellists Melvyn Gale and Hugh McDowell and violinist Mik Kaminski, who would remain with the band until 1982.

Kaminski, like the group’s manager, Don Arden, was born and raised in Cheetham Hill, Manchester, home to the Jewish community in that south-central industrial city. While several Internet sources claim that Kaminski interpolated traditional Jewish melodies and/or “Hava Nagila” into his solo showcase on ELO’s 1977 concert tour, it’s possible that these sounds were incorrectly attributed to Brahms’s “Hungarian Dance No. 5,” which Kaminski definitely did play as part of his solo improvisation, which always concluded with the bluegrass tune, “Orange Blossom Special.”

While evidence that Kaminski is Jewish or played Jewish music in ELO’s concerts is circumstantial, Don Arden’s story is well-documented. Arden was born Harry Levy in 1926. He became an entertainer when he was only bar-mitzvah age, and after World War II, he enjoyed a decade-long run as an impersonator, mimicking actors including Edward G. Robinson (born Emanuel Goldenberg) and well-known “Shabbos goy” Elvis Presley. A Yiddish speaker, Arden also routinely entertained Jewish audiences with his impression of Al Jolson (born Asa Yoelson).

Arden moved into the business side of entertainment by organizing Hebrew folk song contests. From there, he wound up managing and promoting rock acts including Gene Vincent and Small Faces. In this regard, Arden was not unique in England, where rock groups including the Beatles and the Rolling Stones employed Jewish managers (Brian Epstein and Andrew Loog Oldham, respectively). Kenney Jones, the drummer of the Small Faces, once described Arden as “a kind of Jewish teddy bear.” Others weren’t so kind – Arden’s hard-nosed business tactics apparently earned him the moniker, “the Meyer Lansky of pop.”

Arden scored his biggest successes with two groups he steered to worldwide renown: ELO and heavy-metal band Black Sabbath. In 1979, when the members of Black Sabbath kicked their lead vocalist out of the group, Arden’s daughter, Sharon Rachel Levy, began managing Ozzy Osbourne as a solo act. The two started dating, and Sharon Levy went on to garner fame as a star of the reality TV show “The Osbournes” and as a host and judge of TV talent shows, under her married name, Sharon Osbourne.

Arden didn’t totally give up his dreams of his pop stardom. In 1967, he recorded his own version of “Sunrise Sunset” from the Broadway musical “Fiddler on the Roof.” Alas, the song went nowhere on the pop charts: even with his heavy-handed methods, Arden couldn’t put lipstick on a pig.

Back to Jeff Lynne and ELO: In 1979, genius singer-songwriter Randy Newman recorded a song called “The Story of a Rock and Roll Band,” the subject matter of which was clearly ELO – it is stated as much in the song’s lyrics. Newman sang, “I love that ‘Mister Blue Sky’ / Almost my favorite is ‘Turn to Stone’ / And how ‘bout ‘Telephone Line’ / I love that ELO.” It wasn’t quite clear if the track was a tribute or a mockery; it’s that sort of ambiguity that powers so many of Newman’s best songs.

Little could Newman have known at the time that nearly 10 years later he’d wind up in a recording studio with Jeff Lynne in the producer’s booth. On “Land of Dreams,” Newman revisited his Jewish youth in New Orleans in songs such as “Dixie Flyer,” in which he sang, “Drinkin’ rye whiskey from a flask in the back seat / Tryin’ to do like the Gentiles do / Christ, they wanted to be Gentiles, too.” In an interview I conducted with Newman shortly after that album was released, he recounted how he felt trepidation about going into the session, not sure if Lynne had been carrying a grudge against him for the past decade. As Newman portrayed it, the two met for the first time and looked at each other in silence, both waiting for the other to make the first move, utter the first word, and break the tension.

Instead, the two just simultaneously broke out in laughter.

Seth Rogovoy is a contributing editor at the Forward. He is writing a biography of George Harrison, who was a close friend of and collaborator with Jeff Lynne. They were also bandmates in the supergroup Traveling Wilburys.

The Secret Jewish History Of ELO