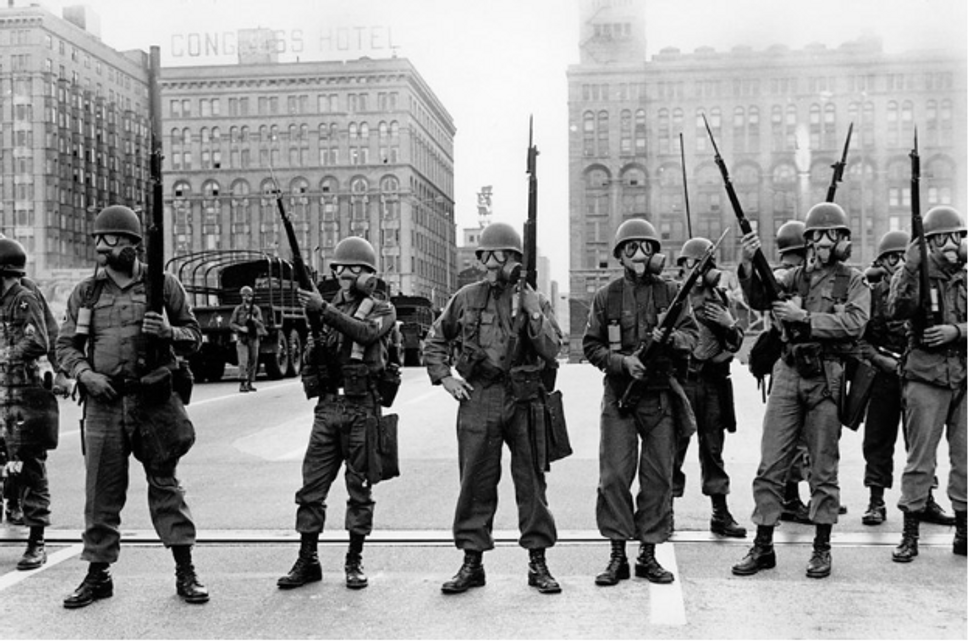 The National Guard on Congress and Columbus Ave.

August 26, 2018 marks the 50th anniversary of the 1968 Democratic National Convention in Chicago, an event that swept the Windy City into discord for four tumultuous days. Protestors camped out at Lincoln and Grant Park were intimidated by police and National Guardsmen, who met their calls for an end of the war in Vietnam with nightsticks and tear gas. In the thick of the action, 29-year-old art teacher Al Lieberman bore witness to history through the lens of his new Leica camera.

“I took photos, I developed them and printed the contact sheets and looked at them and did some printing from them. But I never published them,” Lieberman, now 79, told the Forward. “I put them away in a file for 50 years and then they came alive again.”

Lieberman’s photographs received a second life earlier this month when Richard Cahan, an art book publisher acquainted with Lieberman’s oldest son, submitted them to Chicago Magazine. Shot at a short distance — he didn’t have a long zoom lens — the pictures show the joy, irreverence and violence that marked the Convention up close. But you’d be mistaken for thinking Lieberman was in with any of the groups when the Hippies, Yippies and Students for a Democratic Society started their protests.

“I didn’t know what it was even at first,” Lieberman said of the Convention. That summer, Lieberman and his wife Arleen lived near Lincoln Park, where protestors gathered for “The Festival of Life,” a Yippie-led demonstration with music, dancing and handholding. The peace didn’t last.

“As the days went by it got rougher and rougher,” Lieberman said. “The police kept coming back and throwing everybody out of the park at night and it just kept elevating. One night I saw a group of people trying to turn over a squad car in the middle of the street.”

Lieberman never got close to the International Amphitheatre, where the convention was being held, but by walking through Grant and Lincoln Park every day from sunup to sundown, he rubbed elbows with people perhaps better remembered to history than Hubert Humphrey and Edmund Muskie, the convention’s nominees.

“One early morning I was up for my sunrise walk and I was crossing the bridge over by Lake Shore Drive and I see Allen Ginsberg,” Lieberman said. “I said ‘Where are you going?” and he said ‘I’m going for a meditation at the lakeside. Come on, come on!’ So I went with, he sat down, there’s a group of people. Jerry Rubin was there. Ginsberg is sitting there, he had a little instrument he used. A little pump-up organ. He’d pump it with air and he’d play it like a piano and they were meditating and doing ‘ohms’ and stuff.”

Ginsberg was trying to play the peacekeeper, Lieberman said, but as flag burnings and marches rocked Chicago’s streets, Lieberman was affected by aggressive policing. Walking up a hill at Grant Park towards a statue of the Civil War General John Logan, he was struck by a cop.

“I didn’t see him coming but the police was right on top of me. He’s with his nightstick and he hit me, I had the camera up to my face, [he] hit me right in the lens and broke the lens, knocked me backwards.”

Lieberman had another run-in with the police while shooting the arrival of Pigasus, a 150-pound domestic pig and the Yippie nominee for President, at Lincoln Park. The authorities arrived to take the pig into custody, and Lieberman caught the arrest on camera.

“The pig was squealing his head off and then you had all these people there all going around and they grabbed the pig and in the picture there was a newsman. He stuck his arms through the police line, to the policeman who was holding the pig and he had a microphone and he said ‘can I see the last squeals of this pig?’”

On the afternoon of August 28, the Chicago Police Department rioted after a young man lowered an American flag in Grant Park. The police responded by tear-gassing and clubbing their way through a crowd of 10,000 protestors. Lieberman was cornered against a building near the park when the riot started.

“That was the scariest part of the whole thing,” Lieberman said of the riot. “There was a lot of stuff going on like that all around and I didn’t concentrate on that. I had my share of it, but I was just shooting life in the park.”

This isn’t to say that the political implications were lost on Lieberman, who is retired from teaching art in the North Side of Chicago, a job he had over 20 years, and now lives in Skokie, Illinois near his three children and nine grandchildren. Though he still doesn’t consider himself very political, the four days of the Convention had a deep impact on him.

“It changed me completely actually. After it was over, the last picture I took was this guy walking, one of the demonstrators walking down this path in the park. He had his blanket wrapped around,” Lieberman said. “He was walking past a group of National Guard that were lined up. And you see them giving him the finger and you hear catcalls and stuff. And I related to that guy. I felt that it was a defeat for me too.”