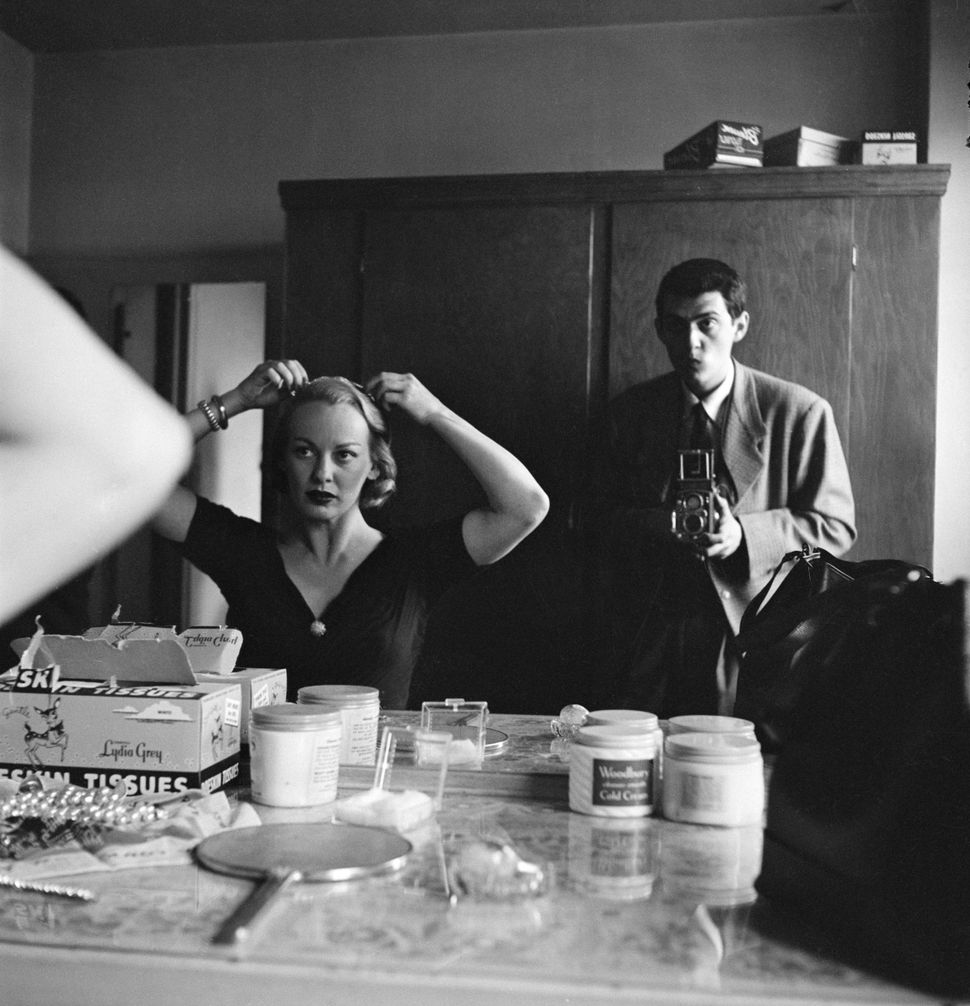 Stanley Kubrick With Faye Emerson from “Faye Emerson: Young Lady in a Hurry.” Image by Courtesy of the Museum of the City of New York & SK Film Archive LLC

As I studied the contents of “Through a Different Lens,” the Museum of the City of New York’s exhibition of Stanley Kubrick’s early photography, I played a game with myself. I tried to forget that the photographs had been taken by the director who made “2001: A Space Odyssey” and “Eyes Wide Shut.” Instead, I imagined them to be the work of a shy Jewish teenager from the Bronx who got mediocre grades, loved chess and screwing around on the drums, and in 1945, as a high school senior, succeeded in getting a part-time job at Look magazine. Which, of course, they are.

The exhibition was occasioned in large part by the 50th anniversary of “2001,” and most, if not all, of the people in the museum that day, myself included, were there because they knew Kubrick gave up photography and went to become a great filmmaker — in other words (and contrary to the exhibition’s title) we were here to examine Kubrick’s photography through the lens of his filmmaking. The text accompanying the images supports that interpretation, explaining, for instance, how the boxing footage in “Killer’s Kiss” (1955) echoes Kubrick’s photo-essay on middleweight contender Walter Cartier, or how his experiences photographing a racetrack shaped the plot of “The Killing” (1956). And though the exhibition doesn’t claim any connections between Kubrick’s work for Look and his later features, I couldn’t help but draw them anyway. How could I not, faced with images of bureaucrats trapped inside their own machinery, ghoulish scientists in dark sunglasses, ape-men swinging big hammers?

Still, I wondered. In thinking of Kubrick’s photography as a kind of sketchbook for his later work, wasn’t I missing something? Didn’t these works have their own style and themes and motifs, unrelated to “The Shining” or “Spartacus?” Then again, would these photographs be of much interest to me, or anyone else, had Kubrick not gone on to Hollywood? In a way, I was dancing around one of the central problems with thinking about photography: untangling the relationship between photographer and subject. Seeing so many of Kubrick’s early images in the same place, it’s impossible not to sense their distinctive “touch,” but it’s much harder to decide how much of this “touch” we should credit to Kubrick and how much to the inherent drama and chaos of New York City, where almost all of the exhibition’s material was collected. The later films, by contrast, lack almost all vérité elements — the last time Kubrick pointed a camera at New York City, in “Eyes Wide Shut,” it was a soundstage in England.

His first notable photograph was, like a lot of vérité stuff, based on a half-truth. While still in high school, he snapped a shot of an old man at a newsstand, head resting in hand, surrounded by papers announcing FDR’s death. Years later, he admitted he’d coached the man to look as mournful as possible. Staged, the image communicates a dull, run-of-the-mill jingoism; without the staging, it might have been a dry commentary on the banality of tragedy, the momentum that allows people to keep daydreaming and picking their noses, even on the day a beloved president dies. In any case, the image sold to Look for twenty-five dollars and helped get Kubrick an apprenticeship there for fifty bucks a week.

Kubrick was, by most accounts, a nervous, quiet kid. He was also sharp and undeniably gifted with a camera, and these qualities quickly endeared him to the staff. The senior photographers joked that they were in the Bringing Up Stanley Club and gave him a series of increasingly challenging, prestigious gigs. The year after he sold his first photograph, Kubrick was assigned to shoot another whiz kid, Johnny Grant, the twenty-three-year-old host of a popular radio program called “Johnny on the Spot” (barely eighteen, Kubrick made his subject look middle-aged by comparison). In one image, he captures Grant leaning out of a high-rise window, the camera pointing straight down so that cars and trucks look like clouds hovering on the horizon.

It was exactly the kind of photography Look specialized in: loud, hungry for attention, adept at witty juxtapositions and sudden shifts of perspective. That same year, Kubrick shot a chimpanzee at the zoo — the animal, standing alone in its cage, seems dignified and curiously aristocratic compared to the mob of Homo sapiens staring through the bars. One of the images from his 1947 photo-essay, “Life and Love on the New York Subway” shows a man and a woman embracing at 81st Street; behind them, an anonymous body lies on the ground, drunk, stoned, or worse. This image isn’t so different from “World’s Highest Standard of Living,” the famous Depression-era photograph taken by Margaret Bourke-White, in which a long line of displaced black men, women, and children stand under a billboard depicting a cheerful white family, the contrast painfully obvious. Where Bourke-White uses visual irony to suggest a moral or political point, however, Kubrick seems to use the technique without a trace of earnestness: Here’s a happy couple, here’s an unconscious body — isn’t that something? Life and love!

Many of the photographs in “Through a Different Lens” are fairly small, reminding us how they would’ve looked in the pages of Look, nestled between promotional fluff and odes to stool softener. A notable exception is Kubrick’s unpublished portrait of a young showgirl named Rosemary Williams, which doubles as a self-portrait. There he is, thin and raccoon-eyed, twenty-one but seemingly a decade or more older. His fingers curl, claw-like, around a camera he carries as a kind of shield between himself and his subject. Williams leans close to the mirror and applies her makeup, so nonchalantly you almost think she’s forgotten she’s being watched.

You can disagree with my interpretation of Kubrick’s appearance, of course. I merely include it to stress a point that’s easily lost in discussions of photography: photographers’ faces and mannerisms have a lot to do with the kinds of images they produce. Kubrick, the shy, unimposing kid, excelled in the role of fly on the wall, something his bosses must have figured out right away. Often, his demeanor put his subjects at ease, encouraging them to relax, be themselves. Some of his other subjects (especially the men) strutted their stuff a little more than usual in his presence, swaggering before the camera as if to compensate for their photographer’s modesty. In 1950, Look sent Kubrick to shoot the boxer Rocky Graziano; in one eye-popping shot, the feared middleweight stands naked under the shower, his massive body rising out of the moist darkness. Here is a man who’s learned to be utterly confident in his physicality — a man, it must be said, utterly unlike the young Kubrick. How else to explain the faint sneer Rocky gives the camera, some combination of “Feast your eyes” and “F—k off, pipsqueak?”

The asymmetry of photographer and subject is critical to the power of the one genuinely iconic image in “Through a Different Lens,” captured in 1948. Sent by Look to document a troupe of circus performers, Kubrick chanced upon an old, bare-chested man, every square inch of his trunk covered in tattoos — even in the black-and-white photograph, you imagine these tattoos to be purple and yellow and green, just as you imagine his skin to be a deep, dirty shade of orange. Hanging from his nipples are two heavy metal rings that stretch his pectoral muscles halfway down to his navel. If he’s in any pain, he doesn’t show it — you get the sense that the rings are no more remarkable to him than the buckle on his belt or the studs in his ears. Kubrick chose to shot the man from below eye level, so that he stares not at but beyond the camera, flanked by a wall of clouds. The photograph anticipates Diane Arbus, with her Jewish giants and obese ladies indifferent to their difference. But the low, heroic camera angle and the thousand-yard stare are the work of a young, awestruck artist, albeit one who might have watched too many John Ford westerns.

Three years later, at the age of twenty-three, he made a documentary short about boxing and sold it to RKO Pictures. A war film followed, then a noir. By the time he was in his mid-thirties he was still a wunderkind, with six features to his name. Then came success, controversy, disillusionment, self-imposed exile from New York, deification. But even if Kubrick had never directed, his early photographs would still be worth looking at more than half a century later. The very best of them — like the imposing figures they often depict — are strong enough to stand alone.

Jackson Arn is a New York-based freelance critic and journalist. Read more of his writing here