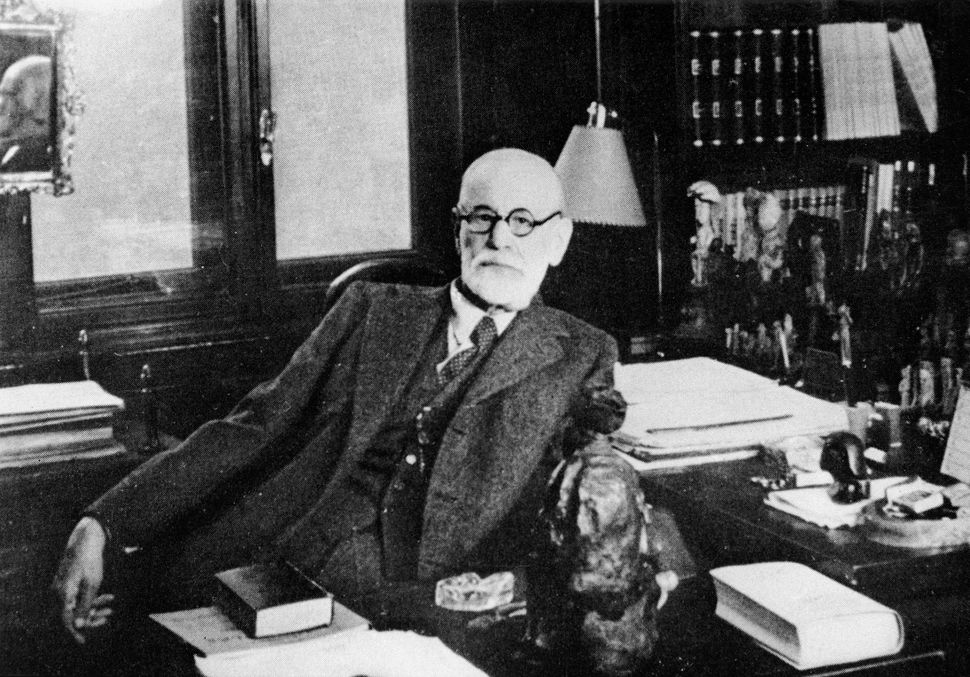 Sigmund Freud behind his desk. Image by Getty Images/Authenticated News/Staff

Sigmund Freud, the father of psychoanalysis, didn’t often dish about his personal life. Even when he used his own family as subjects for his anecdotes — such as his grandson Ernst, who played a famous game of “fort-da” in Freud’s “Beyond The Pleasure Principle” (1920) — he was careful to refer to them simply as “the child” or “the mother.”

Yet Freud occasionally opened up, and one of his rare biographical letters, which details his Jewish heritage, is set to be auctioned by Nate D. Sanders’ Auctions in Los Angeles on August 30. The four-page, handwritten document is one half of a correspondence between Freud and his colleague Dr. Paul Federn, and was composed in Freud’s home in Vienna on June 30, 1913. In it, Freud notes that he delayed answering Federn’s letter, from April of that year. It appears Freud, ever the analyst, thought he misplaced the letter out of a subconscious desire not to answer its questions, writing: “[Your correspondence] had made itself untraceable — most likely as a consequence of my resistance.”

Thankfully, Freud’s resistance soon gave way to a surprisingly candid tract of autobiography. “I was born on the 6th of May [18]56 in Freiberg /Moravia,” Freud wrote. “My father and mother came from Galicia. My mother, nee Nathansohn, from Brody, of very distinguished ancestry (the Nathansohn-Kallir family), my father of the merchant class. According to tradition, as he once reported to me, the Freud family is said to sometime have left their hometown of Köln [Cologne] during a period of persecution of Jews and then to have migrated eastward.”

While the excerpts of the letter so far made public don’t mention, say, what Freud’s Bar Mitzvah Torah portion was — maybe an exegesis of Leviticus that finds the root of some OCD tendencies? — it does confirm Freud’s wife’s rabbinical ancestry.

“[In 1885] I married Martha Bernays, the granddaughter of the Hakham [Chief Rabbi] Isaac B. of Hamburg, niece of Jacob and Michel B.,” Freud wrote. “We have brought up six children; two of the girls are already married now.”

The letter, Sanders’ Auctions wrote in a press release, is among the most comprehensive accounts of Freud’s career in his own words, detailing his tutelage in Austria under the physiologist Ernst Wilhelm Ritter von Brucke and in Paris with the neurologist Jean-Martin Charcot. Freud, who would come to overshadow both of his great teachers, soon established a discipline of his own.

“My work on the neuroses, due to the influence of Dr. Josef Breuer in Vienna, began with a publication in the year 1893,” he wrote to Federn. “From this developed the so-called psychoanalysis, a method of psychological treatment of neuroses, which arrives at special psychological advance conclusions, and the scientific foundations of which allowed manifold applications to other fields, including normal spiritual and intellectual life.”

Freud marvels at how long it took for psychoanalysis to catch on — and how heated the opposition to it had grown.

“[Psychoanalysis] had been given practically no attention until approx. [sic] 1906, when increasing concern for the psychoanalytical problems began to grow, resulting in a zealous contingent of adherents as well as a fierce opposition, which have kept the medical public engaged to this day,” he wrote.