Behold The Oldest Known Yiddish Writing In The World 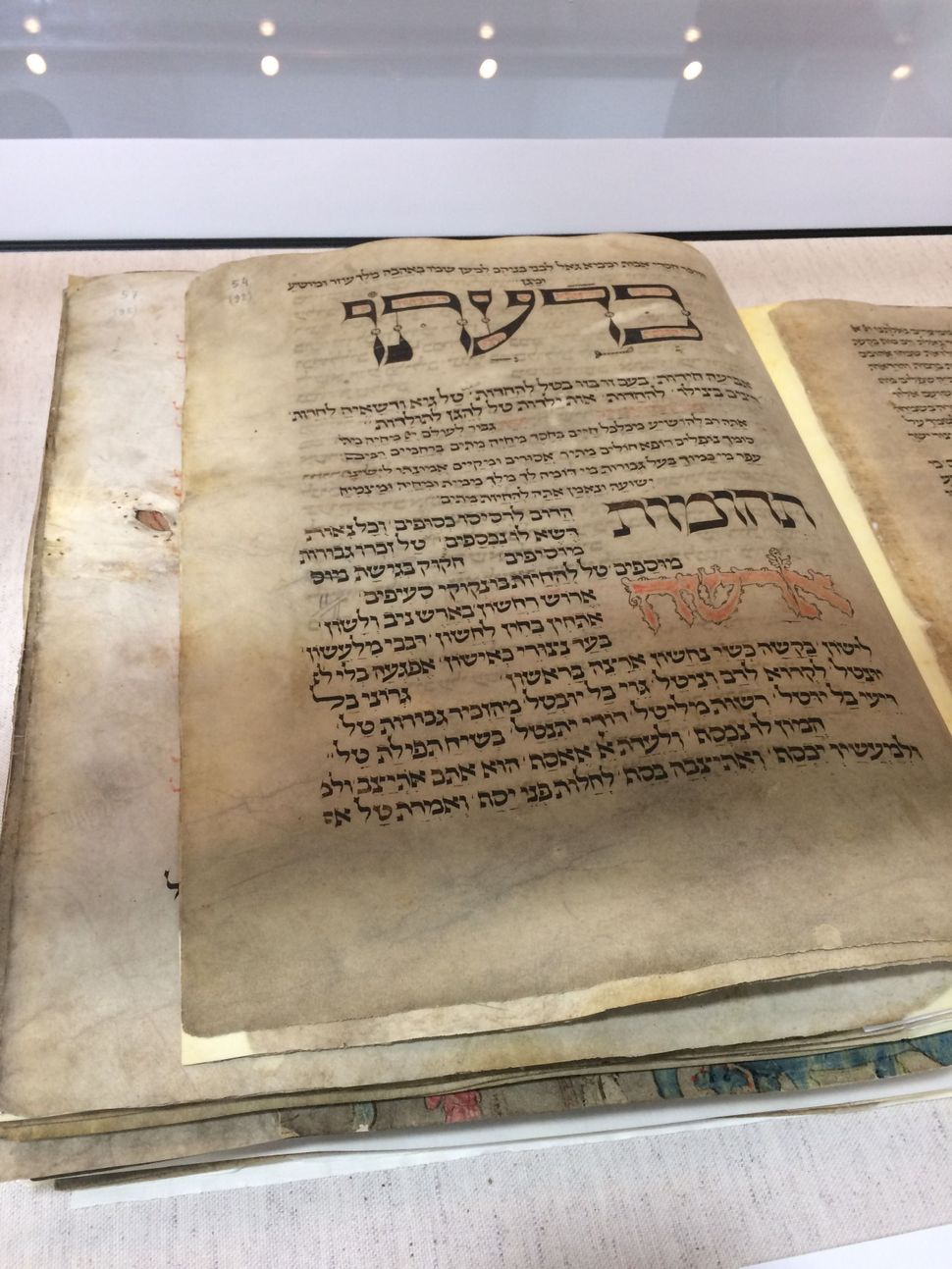 The Worms Mahzor: This manuscript contains what is thought to be the oldest Yiddish writing in the world. Image by Courtesy of the National Library of Israel

A medieval Jewish manuscript bearing the oldest known example of the Yiddish language is making a rare public appearance at Israel’s National Library in Jerusalem ahead of the High Holidays.

The Worms Mahzor, named for the German city where it was housed for centuries, is a richly illuminated codex from the 13th century containing the prayers for the holidays and other liturgical hymns for the congregation’s cantor. The prayer book, with its medieval European cityscapes, bird-headed humans, and menagerie of beasts, was used by the Worms Jewish community for centuries, up until the rise of Nazi Germany in the 20th century.

But hidden within the Hebrew prayers — written in red ink inside blank spaces within larger black letters of the first word of the Prayer for Dew for Passover – appears a wish of good tidings intended for the poor schlimazel tasked with schlepping the weighty tome to the synagogue.

“Gut taq im betage se vaer dis mahsor in beith hakenseth trage,” the Yiddish words read. “Let a good day shine for him, who will carry this mahzor to the synagogue.”

“That is the first known example of written Yiddish in history,” said Yoel Finkelman, curator of the National Library’s Haim and Hanna Solomon Judaica Collection.

An inscription inside the parchment codex informs us that it was completed on 28 Tevet, 5032, or 2 January 1272, in the German city of Würzburg by one “Simcha ben Yehudah, for his uncle, Rabbi Baruch ben Yitzhak,” and that it took Simcha the scribe 44 weeks to complete the original two-volume set. 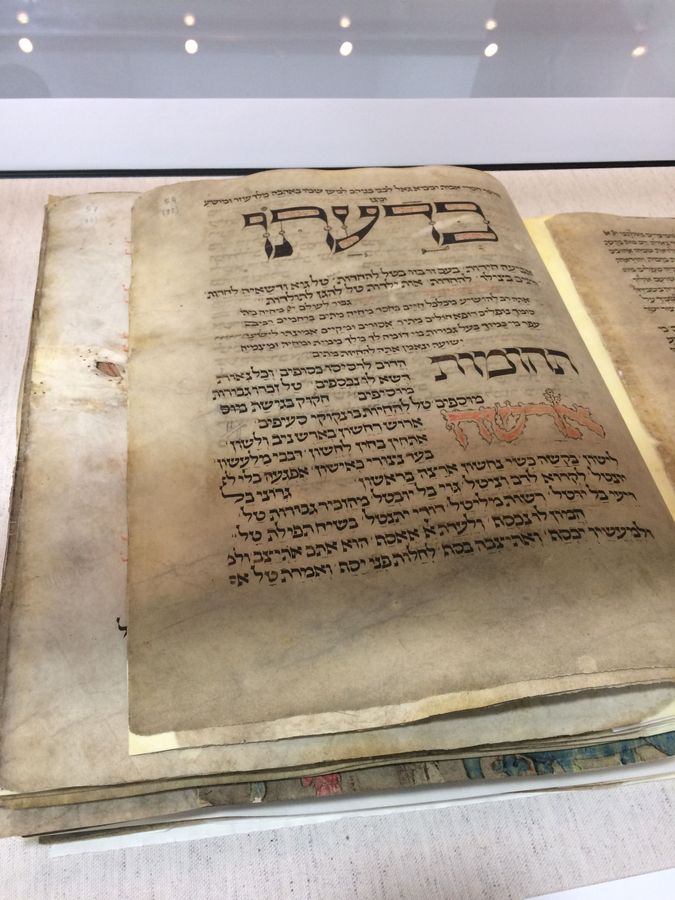 The Worms Mahzor: This manuscript contains what is thought to be the oldest Yiddish writing in the world. Image by Courtesy of the National Library of Israel

Finkelman said the Yiddish inscription is not only an important glimpse of the language in its early form, but also suggests to historians that “beautiful mahzorim were owned by individuals and used by communities, unlike today where the synagogue owns the siddurim.” A family might own a prayer book, but a tome of this size cost “a flock of sheep and a year’s worth of scribal work and decoration,” making it more than most people could afford. Scholars believe that the Yiddish language emerged from German-speaking Jews living in cities along the Rhine around 1,000 years ago. Worms, along with Cologne, Mainz, Speyer and Metz, were some of the prominent centers of Jewish life in the Rhineland where the language developed.

The Worms Mahzor plays an important role in discerning the nature of Yiddish in these developmental years.

“From the linguistic point of view, it shows that from the beginning Yiddish was what we call a fusion language, that on a Germanic basis it introduced words from Hebrew,” said Professor Avraham Novershtern, head of the Yiddish studies department at the Hebrew University of Jerusalem. The Yiddish inscription is largely German words and grammar, but two words – for mahzor and synagogue – are Hebrew, and the entirety of the inscription is in Hebrew script.

That blending of medieval German words and grammar with Hebrew, Aramaic and Slavic terminology produced a new tongue, which “signaled the beginning of a fundamentally new chapter in Jewish history – the Yiddish era,” wrote the late historian Max Weinreich in his “History of the Yiddish Language,” which was finally published in its complete edition in 2008. Over the course of the centuries, Yiddish blossomed into the lingua franca of Ashkenazi Jews across the continent, by the 20th century, the globe.

But understanding the nature of the Yiddish language when the Worms Mahzor was written is no simple task. “We don’t have many clues about the spoken language of the Jews at that time,” Novershtern said. “Even if the language was not so different from the language of the surrounding population, their reading habits were radically different from them.” The Yiddish text was written in Hebrew characters, and he said it’s possible Ashkenazi Jews were not even literate in the Latin alphabet.

These early glimpses at the Yiddish language in its infancy are also extremely rare.

“You have to realize that after this inscription from 1272, we have to make a leap of 110 years till the next dated document in Yiddish, that is 1382,” Novershtern said, referring to the Cambridge Codex, a Yiddish text found in the Cairo Geniza. 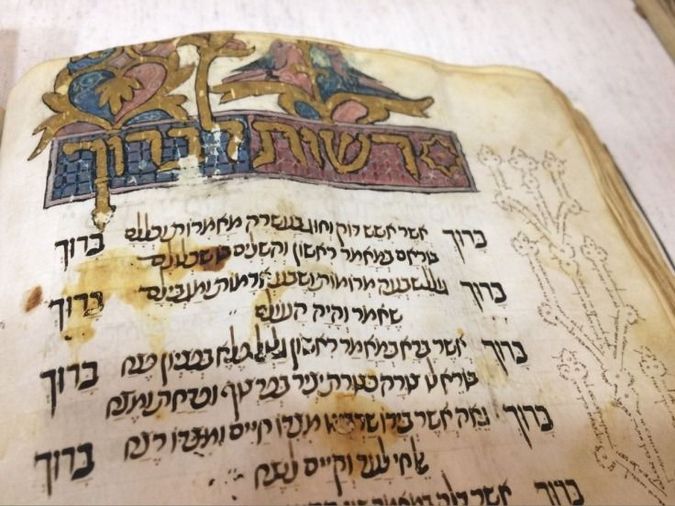 Rare Sighting: Since its delivery to Israel’s National Library in 1957, the Worms Mahzor has only been displayed publicly only a few times, most recently in 1985. Image by National Library of Israel

When exactly Yiddish became Yiddish also isn’t clear. Rabbi Shlomo Yitzhaki, better known as the Rashi, studied in Worms two centuries before the Worms Mahzor was compiled. He or his disciples wrote glosses in Old French written in Hebrew characters, but what language Jews of that time would have spoken isn’t clear.

The Worms synagogue was destroyed in Kristallnacht in 1938, ending centuries of the mahzor’s use on Jewish holidays. But the mahzor and a trove of other Jewish manuscripts were spared thanks to “the vigilance of the municipal archive manager — a non-Jew — who attached the collection to the municipal archive with the rise of Hitler to power,” a 1957 account in the Hebrew newspaper Kol Ha’am reported. But the archivist didn’t want to let the Jewish books go, and only after courts ruled in favor of Jewish petitions did the Worms collection, the mahzor included, make its way to Israel.

Since its delivery to Israel’s National Library in 1957, the Worms Mahzor has only been displayed publicly only a few times, most recently in 1985.

The Worms Mahzor is displayed along with a selection of other historical Jewish prayer books: an elaborately decorated 13th century Catalan text for Rosh Hashanah and Yom Kippur that survived the Spanish Inquisition and the Holocaust; a mahzor fragment from the Cairo Geniza; as well as illuminated Islamic texts and a variety of Israeli New Year’s cards spanning several decades.

The exhibit will be open to the public through November 4, 2018.

Behold The Oldest Known Yiddish Writing In The World