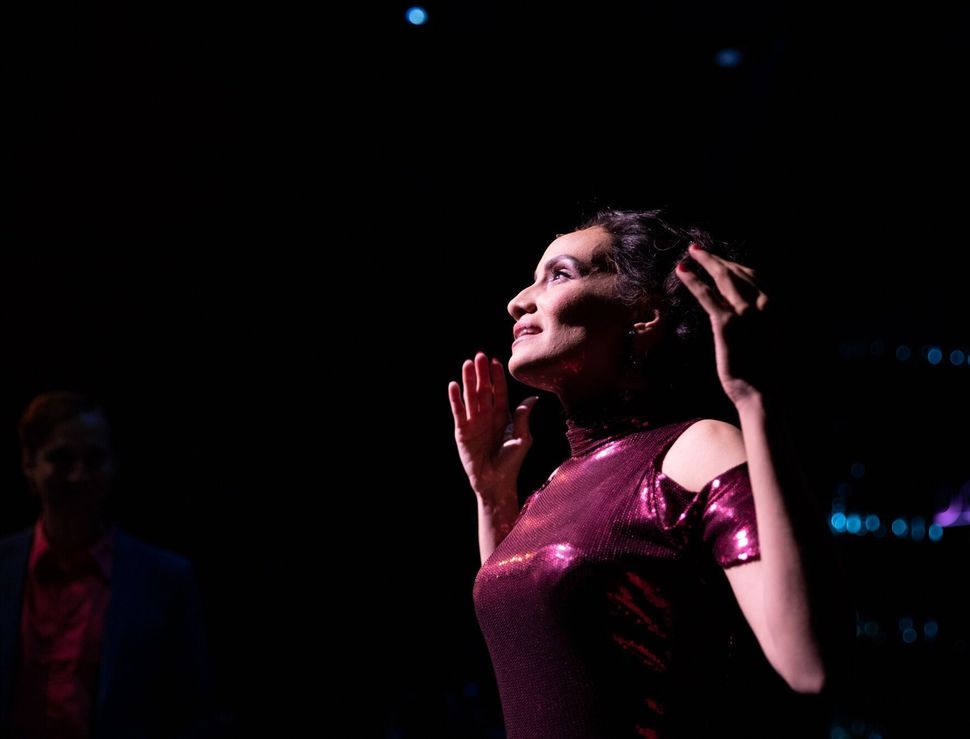 ‘ Frank London’s “Hatuey: Memory of Fire,” a good bet to be the world’s first Yiddish-Cuban opera, is enjoying its U.S. premiere at the Alexander Kasser Theater at Montclair State University through September 23. Given the story, which is based on a Yiddish epic poem written by Ukrainian-Jewish immigrant Asher Penn in Havana in 1931 about the early-16th century national hero of Cuba’s resistance against European colonialism, it makes total sense that the text should variously be delivered in Spanish, Yiddish and English. The show moves effortlessly among the three languages in the same way that it moves organically between two, three, and possibly even four dimensions in time, jumping between 400 years of history over the course of one dramatic night while boasting an urgency and relevance for its audience in 2018 of the sort which its creators could not have dreamed (or had nightmares about) when they first began working on the project eight years ago.

Nor could anyone — especially the composer himself – have known that Frank London had inside him the makings of a highly personalized new musical language boasting elements from the diversity of musical genres with which he has been associated over the years — including Afro-Cuban jazz, new-classical, Minimalism, postmodern-big band (yes, there is such a thing), hard bop, downtown avant-garde, Yiddish music, cantorial and klezmer, among others — from which he has forged a new vocabulary in the service of this multicultural story that includes jazz cabaret, Cuban dance rhythms, Yoruban percussion, and medieval Spanish folk music. Through adaptations of pre-existing Cuban songs and London’s original score, the music itself succeeds at entertaining the audience while telling the story in a form that also happens to be the culmination, so far, of London’s work as a composer.

London is aided and abetted by a phenomenal creative team, beginning with librettist Elise Thornton, whose book and lyrics (again, in three different languages) take an epic poem and blow it out across space and time into scenes that remain loyal to Penn’s poetry, recount the tragic history of the European genocide of Cuba’s original inhabitants, and create an overarching narrative that turns the chance encounter between a Cuban jazz singer and a Yiddish poet into sparks that ignite a cyclical revolution, moving forward and backward in time. (Asher Penn was the Jewish Daily Forward’s correspondent in Havana from 1933 to 1936, and would later work as the Forward’s city editor from 1965 until shortly before his death in 1979.)

The 110-minute evening of dazzling song, dance, color, acting and stagecraft plays out on a versatile, minimalist stage that stands in for a jazz club, an apartment, and a forest. The cast of singer/actor/dancers is phenomenal, none more than Jennifer Jade Ledesna as Timina, the revolutionary center of the 1930s action, who functions as a modern-day Hatuey. From the moment she takes the stage alone in a spotlight, her movements are starkly precise and controlled, raising the stakes for everything that follows, as so much of the plot is played from and off of her: as the instigator of an armed insurrection; the lust object of the Cuban dictator Machado; and the muse of Penn’s epic poem, which spins out of her mind into his pen and comes out as the story we see played out in all its tragic consequences.

Kudos to set designer Camellia Koo, choreographer Maija Garcia, costume designer Oona Botez, lighting designer Devorah Kengmana, and to Mary Birnbaum, who as stage director corrals this cyclone of dramatic elements that vie for the attention of our eyes, our ears, and our hearts, and make them coalesce into a complex spectacle that goes down almost as easily as fare like “West Side Story,” which today we consider mainstream musical theater but at its birth was a rule-breaking challenge to the norms of the Broadway form. Likewise does “Hatuey” entertain with consummate razzle-dazzle at the same time it provokes.

Seth Rogovoy is a cultural critic and a contributing editor at the Forward.