The Secret Jewish History Of ‘A Star Is Born’ 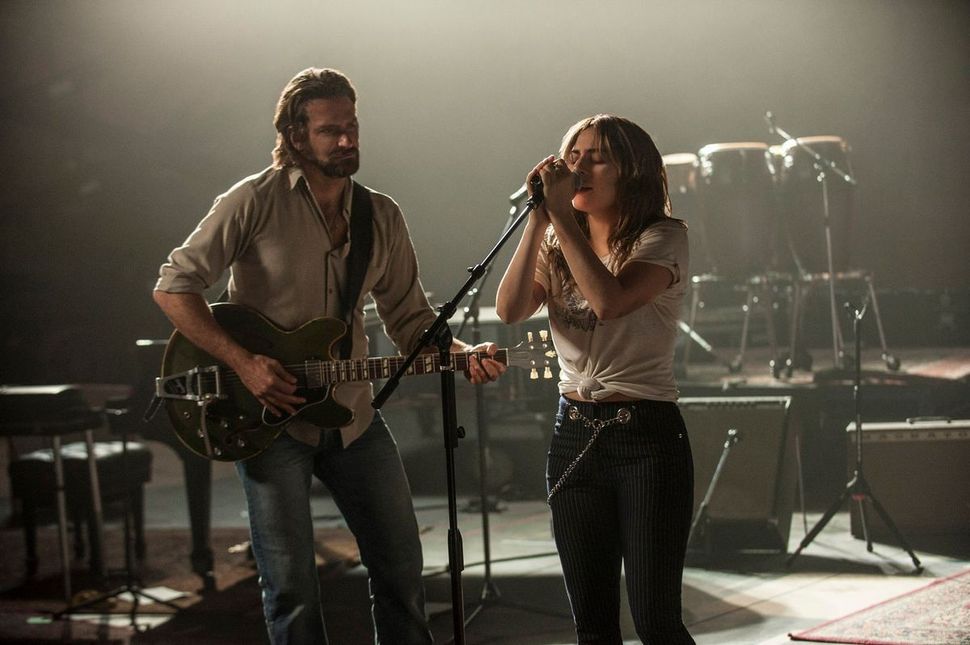 A Star Is Born

Like the cicadas that spend most of their lives underground, emerging only every 13 or 17 years (and how they decide is for you to know and me to find out), the movie musical “A Star Is Born” gets remade every few decades or so. The latest incarnation, starring Lady Gaga and Bradley Cooper, is scheduled to open on October 5, having premiered at the Venice Film Festival in August and at festivals in Toronto and San Sebastian in September.

Actually, this latest version of the tried-and-true story of the romance between an aspiring female singer and a spiraling-down male performer is the first since the Barbra Streisand vehicle of 1976. But that was already the third or fourth version, depending on how one counts.

The origins of the “A Star Is Born” franchise go back even before the first film with that title, to a 1932 drama called “What Price Hollywood?” That movie starred Constance Bennett as an aspiring actress who meets a drunk movie director portrayed by Lowell Sherman. Bennett’s character winds up winning an Academy Award, while Sherman’s star goes down the tubes, in part because of his reckless drinking.

For our purposes, what is most interesting about “What Price Hollywood?” is that it was directed by George Cukor, who would go on to become one of mid-20th-century Hollywood’s pre-eminent directors, helming such mainstream fare as “The Philadelphia Story,” “Gaslight,” “Adam’s Rib,” “Born Yesterday” and “My Fair Lady,” for which he won the Oscar for best director. Cukor was born on Manhattan’s Lower East Side to Hungarian-Jewish immigrants Viktor Cukor, an assistant district attorney, and Helén Ilona Gross. A few years after “What Price Hollywood?” came out, studio honcho David O. Selznick — whose parents were Jewish immigrants from Ukraine — approached Cukor about directing the film that would become the first “A Star Is Born” movie, starring Janet Gaynor and Fredric March. Cukor noted that the script, about an aspiring Hollywood actress who meets a fading movie star beset by a drinking problem, bore a remarkable resemblance to the one he had just filmed a few years earlier, and he declined to direct the movie. Sure enough, the RKO executives who had produced “What Price Hollywood?” wound up almost filing a plagiarism suit against Selznick International Pictures.

The 1937 film introduced the character of Esther Victoria Blodgett, played by Gaynor. While this version was still a drama, the Austrian-born Jewish composer Max Steiner wrote the music to the title song, which was sung by Buddy Clark (born Samuel Goldberg) and backed by the orchestra of Eddy Duchin, the son of Bessarabian Jewish immigrants.

When it came time for the first (or second?) remake of “A Star Is Born,” the character of Esther Blodgett returned (without her middle name) and Cukor relented, agreeing to direct the film for Jack L. Warner, who was born Jacob Warner in London, Ontario, to Yiddish-speaking Jewish immigrants from Poland. Warner, who owned a movie studio with his brothers (guess what they called it?), refused to accede to Cukor’s wishes to cast Cary Grant and then Frank Sinatra for the film. The more white-bread actor James Mason was cast, but the true star of the 1954 film — this time out, a musical version — was Judy Garland, playing a singer with dreams of Hollywood stardom. The script was written by Moss Hart, whose English-born Jewish-immigrant parents were Barnett Hart, a cigar maker, and Lillian Solomon. Jewish American songwriters Harold Arlen and George Gershwin teamed up to write most of the songs for the 1954 version.

A little more than 20 years later, Barbra Streisand took up the gauntlet, reimagining “A Star Is Born” for the rock era. Unable to get Elvis Presley, Marlon Brando or Neil Diamond for the male lead, Streisand — who co-produced the film — wound up casting Kris Kristofferson as the self-destructive rock singer-songwriter who takes a fancy to her aspiring songstress, significantly renamed Esther Hoffman this time out, in one of the movie’s only overt nods to the character’s implied Jewishness (implied mostly because she was played by Streisand). As in the previous films, Esther winds up becoming a star — winning a Grammy Award (as Streisand herself later would, as composer of the movie’s title track, “Evergreen”) — while her romantic interest, who first gave her a leg up in the world, flames out. While the film was a commercial success, it tanked critically, with many noting the lack of on-screen chemistry between Streisand and Kristofferson (allegedly as a result of a total lack of off-screen chemistry). “A Jewish Star Is Born” this was not; that would have to wait for the 1983 film “Yentl.”

Esther is gone in the newest version of “A Star Is Born,” as are any traces of Jewishness in Lady Gaga’s portrayal of the up-and-coming singer named Ally, who gets her big break when the rugged if troubled Americana singer-songwriter Jackson Maine, as portrayed by Bradley Cooper in his directorial debut, takes a fancy to her. With the music this time out being written by Lady Gaga herself along with Lukas Nelson, son of Willie Nelson, the Jewish contributions to the movie are limited to co-writer Eric Roth (“Forrest Gump,” “The Insider,” “Munich”), who was one of the many unfortunate victims of Bernard Madoff’s Ponzi scheme, and Andrew Dice Clay, who is the son of Jacqueline and Fred Silverstein and as a teenager worked as a drummer in the Catskills under the name Clay Silvers, here playing Ally’s father.

Still, it remains to be seen if the star power and considerable talent of Lady Gaga and Bradley Cooper can overcome the somewhat tired and trite plot that has driven “A Star Is Born” since it was first conceived as “What Price Hollywood?” If it doesn’t succeed this time, they can always try again in 20 years or so.

Seth Rogovoy is a contributing editor at the Forward. He frequently mines popular culture for unheralded Jewish affinities.

The Secret Jewish History Of ‘A Star Is Born’