Why You Should Never Date A Man In A Fedora 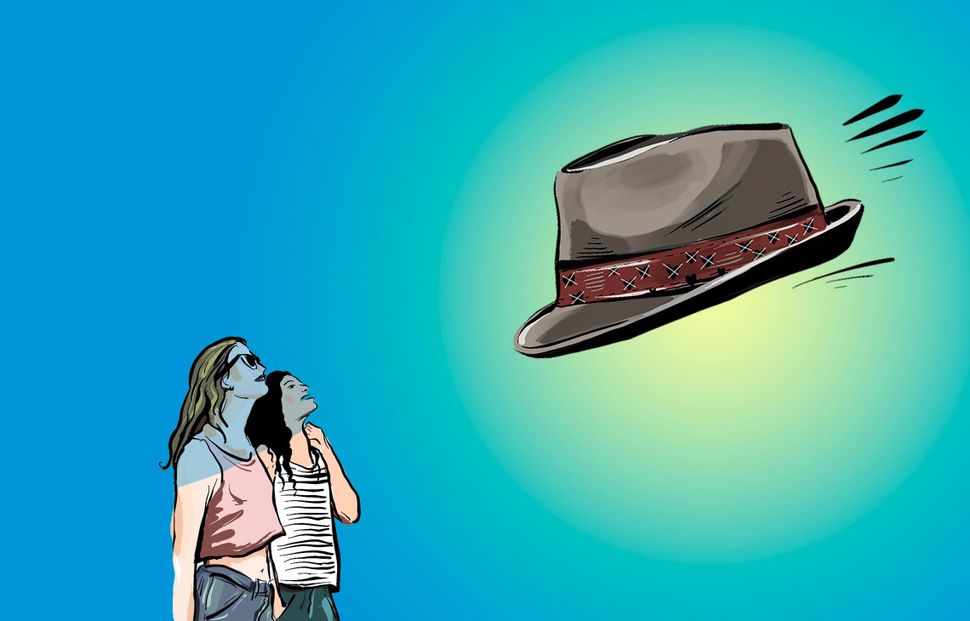 There’s no reason for anyone to wear a fedora.

To me, when a male peer dons a fedora, he is saying either “I have no social graces and mine is a life of constant sorrow ” or “I am aware that fedoras are depraved, yet I flout social convention the same way I would flout an extinguisher during a fire.” With the exception of certain jazz dancers, wearing a fedora purely for fashion reasons is shorthand for pervert.

Yes, a man in a fedora is a harbinger of suffering, but I underestimated the power one can have.

Some time ago, I came up with an idea for this column: I would let my mother take control of my dating apps. Assuming my online identity, she began setting me up on dates. After each one, I would discuss them with Talya.

Talya is my co-worker. We sit a few feet away from each other, separated by a cubicle wall. I write pop culture. She writes culture. I write about sex, social media and celebrities. Talya writes mostly about European graveyards. Then one day she ends a relationship, and I begin a strange new relationship with my mother, and we both start going on a lot of dates.

It’s Monday, and Talya is glowing. Her first date since her breakup was spectacular! They talked for hours about literature and poetry. She’s very interested in him. My last date was dull, I tell her. She’s sure things will improve soon.

And they do. The next night, Talya and I run into each other in the company bathroom after work. We put on lipstick side by side in front of the mirror. She’s not even sure she wants to meet someone new — Sunday’s date was so good, after all.

A few afternoons later, I pop my head over the cubicle wall and ask, “How was the other night?”

“Bad,” she groans. And worse, that guy who she had the hours long date with went on a date with someone else and he feels seriously about that woman, and now he just wants to be friends! “I just don’t understand why he’s so sure about her after one date,” she laments.

“My date was really Jewish,” I tell Talya, with the breezy anti-Semitism of someone who lost mostly distant cousins to the Holocaust. “But we had a great click.” The thing is, I say, I liked Josh a lot, but in his dating profile — my uvula flaps a warning against my throat as I say this — he was wearing… a fedora.

“And also, he was wearing a fedora.”

We each pull up our date’s profile. It’s the same person.

We run to the women’s bathroom. Talya is laughing. I feel the agitation of a ballooning ego and draining self-respect, like I’m giving blood while drinking cranberry juice. Why can’t a date just be nice? Why does it have to be a fedora-wearer you’re inadvertently stealing from your colleague?

“I love this,” Talya says, smiling with a genuine warmth and authentic goodwill I doubt I will ever feel, even at the birth of my first child. She suggests we celebrate with a selfie. She wraps her arms around me, snaps a pic, and sends it to Josh. The caption is “She was mine first.”

As the days shorten and the High Holidays appear over the horizon like a summer storm, I use Talya as a sounding board. I lean over our divider as she tries to write, soliciting her opinion on Josh’s exact religious values. His career prospects.

“But what,” Talya asks, “are you going to do about the fedora?”

A thrill of dread runs through my body, like a mouse feeling the high-voltage shock of an electric trap before sizzling to death. Granted, Josh advertised his fedora in his dating profile, but I had assumed it was more of a commentary on the flaccidity of contemporary masculinity than an actual fashion choice. But Talya confirms that the hat made an appearance on their date.

And yet, I go on the second date.

And it’s so good. We sit, facing each other, at a tall table. My chest keeps doing a thing that feels like that moment when something made of glass catches the sun. He loves chess. He keeps Shabbat. I find the fact that he wore a windbreaker to The Dakota Bar oddly attractive. I ask him why he didn’t just admit to Talya and me that he accidentally went out with two women from the same small publication in the same week. “I’m a serial monogamist,” he says, blushing. I tell him that my mom was impersonating me in 80% of our conversations. He seems to accept this. We talk about our senior proms. At midnight I float home, thinking about how I would see the world if I were, like him, trilingual. And then just as I’m about to succumb to the fantasy, I remember that this man sometimes wears fedoras.

I go on a weekend away with two childhood friends. It’s rush hour, and the story of Josh gets us from Chelsea to the upper Bronx. “I understand,” one of the friends sympathizes. “Why don’t you and Josh take the fedora, do a big ceremony, and burn it publicly?”

“That’s exactly what my therapist said to do, and both of you are missing the point!” I hiss. But as we drive north and the sun sinks, for the first time in my life I Google “sunset time tonight?” to find out when I can expect to receive my last text from the Shabbos-loving, headgear challenged, very Jewish man my mom found me who was probably meant for Talya.

It’s a beautiful weekend. My friends and I walk along the Hudson. We feign being the kind of people who can afford to go antiquing. We eat a lot of farm-to-table small plates. Night falls. I try to focus on the conversation. But at 8:27 p.m. my phone pings, and I can’t help it — I squeal. I think of a line I love by the poet Gerard Manley Hopkins, “My heart, but you were dovewinged, I can tell…. To flash from the flame to the flame then, tower from the grace to the grace.” It resonates with me, even though it’s actually about discovering Catholicism during a shipwreck.

I return to the city. I meet Josh in Central Park for a late-night walk. I am wearing the same amount of makeup as you would expect to see on a child pageant contestant. I have spent too much time around people and am not in a good mood. I can feel the outline of the cobblestones through my cheap ballet flats. We get into a dead-end conversation about feminism that ends with me talking to him as if I were a deranged witch. We walk silently around the reservoir, I in my uncomfortable shoes and too short shorts, him with a phantom fedora floating above his head.

Josh does not text me after the date. I text him. He responds briefly. I write back. He doesn’t. I wait three days and then I text, “I am ready for you to ask me out again now.” I wait a fascinating 12 hours. I observe, from a distance, the humbling situation I find myself in.

He texts me back: “Touché, next week is super busy, but the week after?” My anger over this fast-and-loose approach to the word “touché” is overcome by my desire to see him. “If you change your mind, walk with me in the park tonight?” I write. He responds something about needing to study for the GRE. The GRE! If he wants to do so well on the GRE, he should spend some more time around me — I got a 790 on the reading section of the SAT, for f—k’s sake.

I tell Talya as much the next day. She nods sympathetically as she sips tea out of a travel mug. By now, Talya has gone on many successful dates, not to mention purchased a white jumpsuit so beautiful it makes me want to plunge her into a sewer. “He’s fickle, Jenny,” she says. But I don’t listen. He likes me!

It’s Saturday night. You can probably see the stars over the Central Park Reservoir. Orthodox Jews have been texting each other for hours. I eat all the chocolate in my house. I Google: When are the GREs?

It’s easy, for me, to become obsessed. I can imagine marrying someone — or murdering him — within seconds of our meeting. I can build a character flaw around an offhand comment, or a type of hat. I like dating because it’s a kind of storytelling. And I was so excited about this story. But how can a story be well written if it ends with something mundane — like some guy who didn’t send me a text message?

It’s Monday, eight days since my last text contact with Josh. “Jenny, let it go,” Talya says. She hands me chocolate. She makes me tea. She says, “You deserve someone who texts you back.”

We pause to consider our days. I need to find a Jewish angle to this Elon Musk thing. She’s editing a story about Holocaust imagery in German video games.

We sit down, side by side, two women who write stories. Two women who were both rejected by the same man, who was wearing a fedora.

Why You Should Never Date A Man In A Fedora