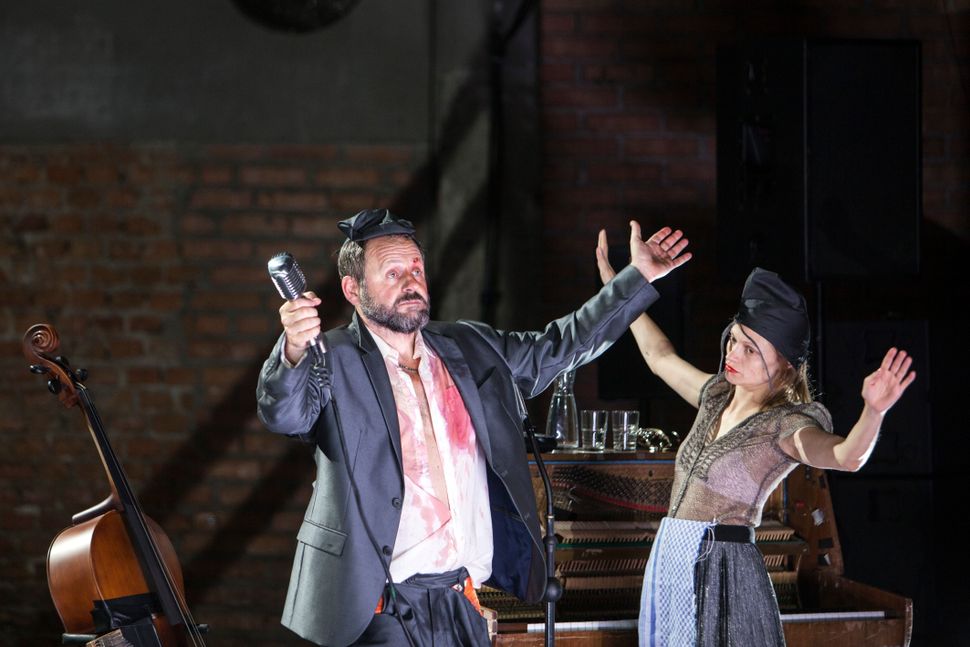 After two hours and 40 minutes of brutal self-flagellation, Dov Greenstein stumbled exhaustedly around a raised wooden stage strewn with flowers: his shirt torn, his pants ripped, his face battered and painted with blood. “I’m a little tired now,” he said, exhaling as the lights dimmed and the stage faded to black at the end of the Austrian Salzburger Festspiele’s production of David Grossman’s “A Horse Walks Into a Bar.” Only with these words was the comedian released from his misery, and the audience — who had been his hostages for the evening, forced to bear witness to his mental torture and collapse — could finally breathe a sigh of relief.

The play was helmed by the Czech-born director Dušan David Pařízek, “Kommt ein Pferd in die Bar” and has transferred to Vienna’s Akademietheater. The German-language production (written by Eva-Maria Voigtländer) comes at the same time as another well-regarded adaptation of Grossman’s novel, directed by and starring Dror Keren and running at Tel Aviv’s Cameri Theatre. Having also won the International Man Booker Prize in 2017 and the Israel Prize in 2018, Grossman is today perhaps Israel’s most celebrated writer, and “A Horse Walks Into a Bar” is the most discussed Israeli novel of the past decade.

Grossman’s last three novels, in fact, have each approached the same themes of grief and the relationship between parents and their children, albeit from different angles and utilizing startlingly different forms. “To the End of the Land,” written in 2008, was not so much about grief as it was about the fear of grief. Since her son has re-upped in order to participate in a major military offensive, rather than wait at home for the unwelcome phone call or visit, Ora takes flight to the Galilee and begins an epic and surreal journey across the country, detached from and yet shaped by the horrors of war and realities of Israeli life.

With “Falling Out of Time,” in 2011, Grossman turned away from narrative prose and to verse and libretto, crafting something that exists in the space among play, poetry and novel. It is a masterpiece in which Grossman finds a new language to talk about parental grief and bereavement, conveyed magnificently in English by Jessica Cohen. Still, it is the 2014 “A Horse Walks Into a Bar” — the story of the comedian Dovaleh G’s disintegration in front of a live audience, triggered by his failing health and childhood trauma and repression — that seems to have broken through with readers and reviewers alike.

Its success is peculiar, given that the novel has to overcome two major obstacles. “David Grossman’s ‘A Horse Walks into a Bar’ is not funny; in fact, it might be one of the least funny novels I have ever read,” Stephen Greenblatt’s review in The New York Review of Books declaratively begins, and yet, somehow, he may be understating the extent of the problem. For a novel about a comedian that is set in a comedy club, “A Horse Walks into a Bar” is totally devoid of humor. It is not that Grossman doesn’t know how to write in a comic register, for this is someone who understands the human condition and how to convey emotion better than most; but those skills are not on display in this particular novel.

There is also an inherent tension between the novel and stand-up comedy itself. The novel shapes and curates the world, creates structure and symmetry where there was once chaos in search of meaning and understanding. It is also inherently static, for while a novel can be reread in search of that which was misunderstood or overlooked, the words remain the same. While a form of rehearsed stagecraft and a version of storytelling, with material written and rewritten, rehearsed and rehashed, stand-up comedy to some extent fights against the tendencies of the novel. Intrinsic to stand-up is its anarchy, its spontaneity and interactivity — things that are hard to convey on the page. There are only so many ways to note how an audience laughed, applauded or cried before the reader’s patience wears thin.

But what reviewers identified, and what accounts for the novel’s success, is that its gaze is not outward, as is the case in a certain sense with “To the End of the Land,” but unrelentingly and punishingly inward. The violence the novel explores “is more private and intimate. Its central interest is not the vicious treatment of vulnerable others but the cruelty that wells up within families, circulates like a poison in tight-knit groups, and finally turns inward against the self,” Greenblatt wrote.

“Grossman’s portrayal of Israeli society is rich and complete, filled with sociopolitical detail but rendered with a stand-up’s shrug of the shoulders,” Gary Shteyngart observed in his New York Times review. Indeed, though the novel is confined to the basement of a comedy club in Netanya, Dovaleh’s suffering and the details of his life cannot be understood except in relation to the story of Israel and the Holocaust. Consider, too, the inversion of Grossman’s main subject: If “To the End of the Land” and “Falling Out of Time” were about parents grieving for their children, “A Horse Walks Into a Bar” examines the scars of the orphaned child:

To tell you the truth, I don’t understand it myself anymore. The driver was right: I should be crying, that’s what orphans do, isn’t it? Or half-orphans, I guess. But I have no tears, I have nothing, my body is like a shadow, no feelings at all. And also, how can I put this… It’s like nothing can really start until I actually know. Isn’t that so?… Only my eyes are on the verge of exploding the whole, but not from tears. No tears. From pain, just deadly pain pressing against my eyes.

In its evolution from page to stage, “A Horse Walks Into a Bar” regains its spontaneity. Virtuosity is present, too, though in this case not so much the writer’s but the actor’s. There are one or two misguided choices. Early on, for example, it is suggested that Dovaleh G has an alcohol problem, which feels wholly unnecessary and seems to miss the point of the character’s angst and vulnerability. But overall, Samuel Finzi, who plays Dov and is never offstage in this one-act play, successfully walks the tightrope and performs the superhuman feat of carrying an entire production on his shoulders for nearly three hours.

What is lost, sadly, is the novel’s ambiguity. To read Grossman’s telling is to never be sure entirely whether one is being played for a fool or not — or if, in fact, Dovaleh is simply the fool himself. The comedian teeters on the edge of a nervous breakdown, swaying and swerving between light and dark, humor and pathos, appearing to be in control one moment and totally out of it the next, pulling the audience toward him before spurning them anew. Yet the theatrical adaptation of “A Horse Walks Into a Bar” — staged in a sparsely decorated warehouse space of brick walls, wooden floors and racks upon racks of dark-gray suits — is an evening of unrelenting darkness.

Slurring, sweating, staring into the audience with the eyes of a maniac, the play’s overall direction is signposted from its earliest moments. As Dovaleh throws himself about the stage, beating himself up while documenting his own deterioration, his clothes begin to tatter as his face and body become smeared with blood. His is a torture and anguish that compares not so much to the ritual of mourning but to Mel Gibson’s bloody gospel. With its harsh, industrial lighting, by the second half of the play — which is when the piece is really only beginning to get going, as Dovaleh begins to recount the story of his mother’s death and his journey to her funeral — the theater resembles an abattoir for the human soul.

In Pařízek’s hands, “A Horse Walks Into a Bar” is also oddly decontextualized. The abstract setting removes the action from the comedy club, giving it the unwelcome feel of an art installation: something one can gaze upon with curiosity, while forcing on the observer a certain emotional distance. Strangely but perhaps inevitably, although the jokes, references and framework of the novel haven’t changed in its transfer to the stage, wrenched from Netanya and stuck down in Salzburg, something of the piece’s inherent Israeliness and even Jewishness has been lost. Without these physical and cultural harnesses to restrain the production, this “Horse” feels oddly untethered, roaming everywhere and nowhere and leaving in its dust feelings of ennui and, frankly, bewilderment.

Liam Hoare is a freelance writer based in Vienna.