‘A Good Name’: What Jewish Law Says About Crimes Committed In Youth 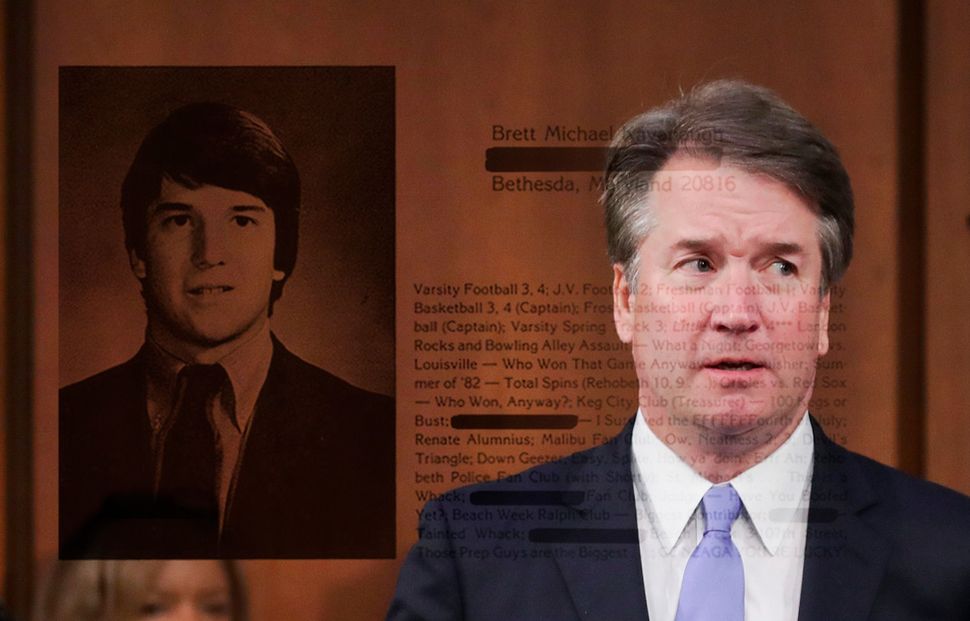 On Thursday, Dr. Christine Blasey Ford testified that President Trump’s Supreme Court nominee, Brett Kavanaugh, tried to rape her in 1982. Her testimony, some of which has been public for weeks, sparked a vociferous debate about sexual assault.

Democrats, who opposed Kavanaugh from the get-go, see in the accusation a tarnished name that would impede his ability to serve effectively, while Republicans see the accusation as unsubstantiated and politically motivated. Some have defended Kavanaugh on the grounds that even if true, the accusation describes a mere indiscretion of youth, a misdeed that may be simply a symptom of the impulsive adolescent brain.

But it’s not just our current hyper-polarized political climate that has debated what role the crimes of youth should play in a judicial candidate’s standing. Jewish texts have plenty to say on the topic.

Surprisingly, they fall on the side of Kavanaugh’s opponents — and unrelated to the specifics of sexual assault. For Jewish sages throughout the ages, a tarnished reputation, independent of any criminal prosecution, was enough to disqualify a judge.

Over the centuries, throughout the texts’ discussions of what constitutes a proper leader — Jewish sages are preoccupied with the importance of a “good name.” In the Ethics of our Fathers (4:13), Rabbi Shimon asserts: “There are three crowns: the crown of Torah, the crown of priesthood and the crown of monarchy – but the crown of a good name outweighs them all.”

That is, one can be a brilliant scholar — or one can descend from great and powerful lineage — yet it is all meaningless if one does not have a good reputation. There, 15th-century commentator Ovadiah ben Abraham of Bertinoro notes that if a scholar, a priest or a king have “hateful” reputations, one is permitted to “disgrace” them.

And it’s more than rhetoric. There is actual legal significance in having a “good reputation.” According to Maimonides, a “shem tov,” a “good name,” is a prerequisite for appointing a judge, as my husband (my local Torah scholar) reminded me over Shabbos lunch.

Open the Mishneh Torah, where Maimonides unpacks the biblical descriptions of a judge in great detail. Judges appointed to the Sanhedrin, he writes, must be “mighty in their observance of the mitzvot, who are very demanding of themselves, and who overcome their evil inclination until they possess no unfavorable qualities, no trace of an unpleasant reputation, even during their early manhood, they were spoken of highly.” (Translation by Eliyahu Touger)

Interestingly — the teenage behavior of a judicial candidate is relevant, Maimonides says. It is telling of one’s moral character, no matter how long ago it was.

But perhaps what is more interesting is the fact that Maimonides does not only require a judge to be righteous, or rather, sin-less — something that may be, somewhat, measured.

A good “name, “no trace of an unpleasant reputation,” as elusive as that is, is important for Maimonides. A mere stain on one’s standing, a grave rumor with substantial weight, is enough to disqualify a judicial candidate from being confirmed — probably because a bad repute alone is enough to dangerously devalue a judge in the eyes of the people he serves.

Jewish texts are explicit with the severity which we must apply to electing judges. (Other prerequisites: A judge must be male, “of fine lineage,” have a knowledge of medicine, mathematics, astronomy, and idolatry, among other subjects; and cannot be “very old” or “childless.”)

Indeed, more broadly in Jewish thought, leaders are held to a higher standard. Consider the oft-cited Talmudic phrase (Yebamoth 121b): “God is particular with those around Him [i.e. the righteous], with the precision of a hair.” The righteous — and judges ought to identify as such — are assessed ruthlessly, unflinchingly, by Jewish law and by God Himself.

If we are a nation built on Judeo-Christian values — let us not forget the religiously-mandated rigor demanded of a judge’s confirmation.

Regardless of what exactly happened in 1982 in a Maryland home — or in 1983 in a Yale dormitory — a judicial candidate’s already-disgraced reputation matters, for the sake of the standing of the court. Even halacha says so.

‘A Good Name’: What Jewish Law Says About Crimes Committed In Youth