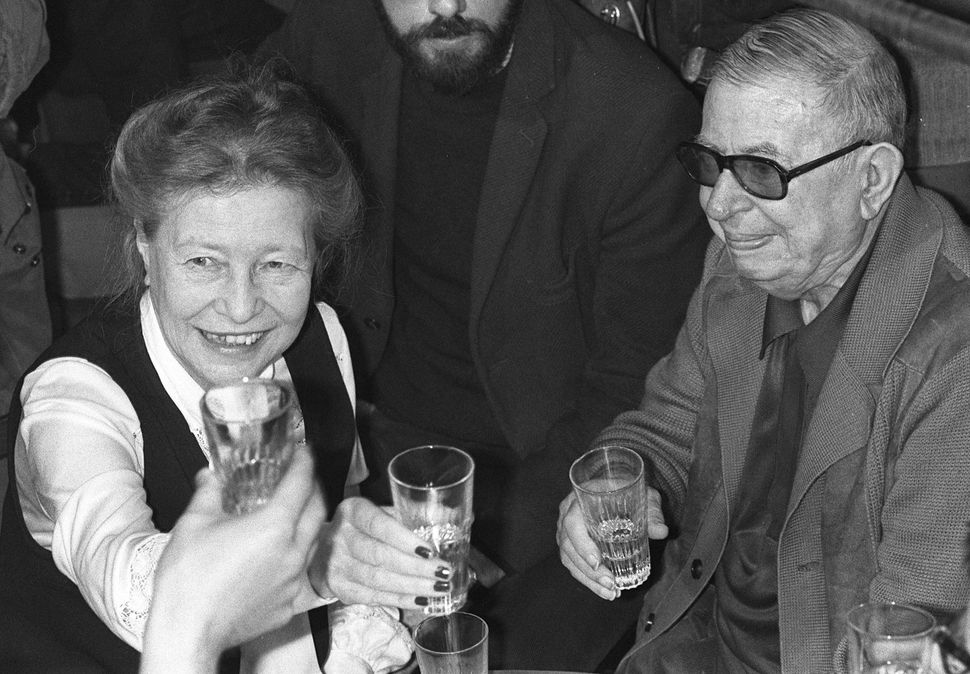 Bad faith is very much in the news. As the media relentlessly remind us, Republicans are tirelessly accusing Democrats of bad faith, while Democrats relentlessly blast Republicans for the same sin. But Jean-Paul Sartre, the thinker who immortalized the phrase, would argue that what he called “mauvaise foi” is not only quite different, but it is also a condition that both Republicans and Democrats, pro and anti-Kavanaugh camps now seem to suffer from.

The phrase appeared seventy-five years ago when, in 1943, the prestigious publishing house Gallimard published Sartre’s philosophical magnum opus, “Being and Nothingness.” At more than 700 pages, the book literally weighed a kilo and figuratively fell from the printing press to the floor with a thud. In Nazi-occupied Paris, most residents already found their everyday being an all-consuming business as they found mostly nothingness in grocery stores. Only after France’s liberation did his book begin to attract readers when, along with Albert Camus and Simone de Beauvoir, Sartre was heaved onto the world stage as a representative of a new philosophy called existentialism.

In the book, Sartre defines bad faith as our refusal to admit, either to others or ourselves, the meaning of our actions, even (or especially) as we carry them out. For example, while I might commit a succession of wildly partisan acts, I fail to see what strikes others as a meaningful pattern. This blindness results from my reflex to see each of these acts individually, and my ability to invoke mitigating factors for each of them. And so, I can tell myself, and others, that I am the most objective of actors, someone fully capable of exhibiting the proper temperament when necessary.

Most important, bad faith blinds us to the brute fact of our radical freedom: We are free to choose what we are. In his celebrated and controversial essay “The Anti-Semite and the Jew,” published shortly after the war, Sartre applied the notion of bad faith — which he now called “inauthenticity” — to the nature of anti-Semitism. The anti-Semite (and to a lesser degree what Sartre calls the “inauthentic Jew”) denies this existential reality, instead insisting that he has a fixed essence just as his wholly invented Jew. In a word, anti-Semitism is the “fear of the human condition.”

This also applies in less dramatic ways. Take Sartre’s famous vignette of the café waiter — perhaps the one who served him as he was revising this same chapter at the crowded Café de Flore — who impeccably and repeatedly reenacts the gestures and utterances one expects of a café waiter. As Sartre remarks, “We do not have to watch him for very long before we understand. He is playing at being a café waiter.”

Indeed, so convincing is the waiter as a waiter that he comes to see himself as, well, a waiter. He thus blinds himself to the existential fact that he is utterly free to choose a different role. This malady, mind you, is not limited to the profession of waiters. Take my own job. Yesterday, I taught a couple of classes at my university. Winding and weaving my way between desks and blackboard, I see myself as a professor. In fact, I’ve seen myself as a professor for nearly thirty years. This long-running performance has become the person, and while the reviews have varied over the years, my conviction that I am a professor has not.

The crucial point, for Sartre, is not that I am lying to others about my identity as a professor. Instead, I continue to act as if I am nothing more or less than a professor. If I were to accept the radical freedom that defines my original state, I must also accept the angst that accompanies it. Like someone standing at the edge of a cliff, overcome by the vertigo that comes not with the realization that I might fall, but instead that I am free to leap, so too with standing at the front of my class. Dizzied by the knowledge that I am free to leap out of my role as professor, I flee this prospect all the while wrapping myself even more securely in my jargon and job definition.

No matter how fast I flee, however, the shadow of bad faith easily keeps pace. Just yesterday, a student reminded me after class that she would miss two weeks because she was going to Germany for Oktoberfest. When she first told me at the start of the semester, I distractedly thanked her for the warning. But now, thinking how silly a reason this was to skip four classes, I went into professorial high dudgeon. I told the student that I would not renege on my original consent, but that I found her excuse to be largely inexcusable. With that, the deflated and defeated student turned around and left the room.

As I watched her leave, I felt uneasy with myself. Did I need to be so short with her, especially as I had already given her my permission? Whatever my reason, I acted in bad faith — not because, as the late philosopher Robert Solomon pointed out, I lied to myself, but instead because I was unwilling to do anything about it. I could have called the student back and found a different and kinder way to express my disappointment, but I didn’t. Confronted by the question, “What should I do now,” I did not leap, but instead fell back into the rationalization that what was done was done. Quite simply, I refused to entertain the primordial questions of what I could have done and who I really am.

This is the point at which we, as a nation, find ourselves with the Kavanaugh Affair. In the case of Christine Blasey Ford, Sartre’s fellow existentialist Simone de Beauvoir might suggest that she had spent the last 35 years in bad faith. She had spent most of her adult life, following the sexual attack she experienced, refusing to confront what she might have done or said at the time. Instead, she understandably fled this moment, seeking to redefine herself through her roles as a mother, a wife and a researcher. But a moment seems to have arrived a few years ago when Dr. Ford, refusing to flee any further, instead assumed her freedom — with all the soul-sickening anxiety — and confronted her past and spoke about her experience. On Thursday, we saw the inspiring heroism this effort required.

As for the other players in this drama, they are still mostly and futilely fleeing themselves. While the Democrats are defending the right cause, more than a few are doing so as Democrats, and not as individuals who accord the respect and dignity to all of their fellow women and men. As for the Republicans, it is not so much that they are lying to themselves about their motives or aims, though this might well be the case with many of them. Instead, they have limited their engagement to a narrow range of choices — quite palpably in their refusal to call for an FBI investigation — and have thus refused to acknowledge their freedom to act on those choices they saw fit not to include. They resemble, in effect, Sartre’s anti-Semite.

When Sartre was writing “Being and Nothingness,” he saw a number of fellow intellectuals who either collaborated or, more frequently, accommodated themselves to the authoritarian French regime and its Nazi masters. They found various reasons for doing what they did, telling themselves they really had no choice in the matter. That this kind of bad faith afflicted even Sartre, who continued to publish under the aegis of Vichy and Nazi censors, should remind us that we all suffer, to various degrees, from this affliction. As we follow events in Washington, it is too much to hope that the political actors will catch themselves in the act of bad faith. Still, we can at least keep an eye on ourselves.

Rob Zaretsky teaches in the Honors College, University of Houston. His new book, “Catherine and Diderot: The Empress, The Philosopher and the Fate of the Enlightenment” will be published this winter by Harvard University Press.