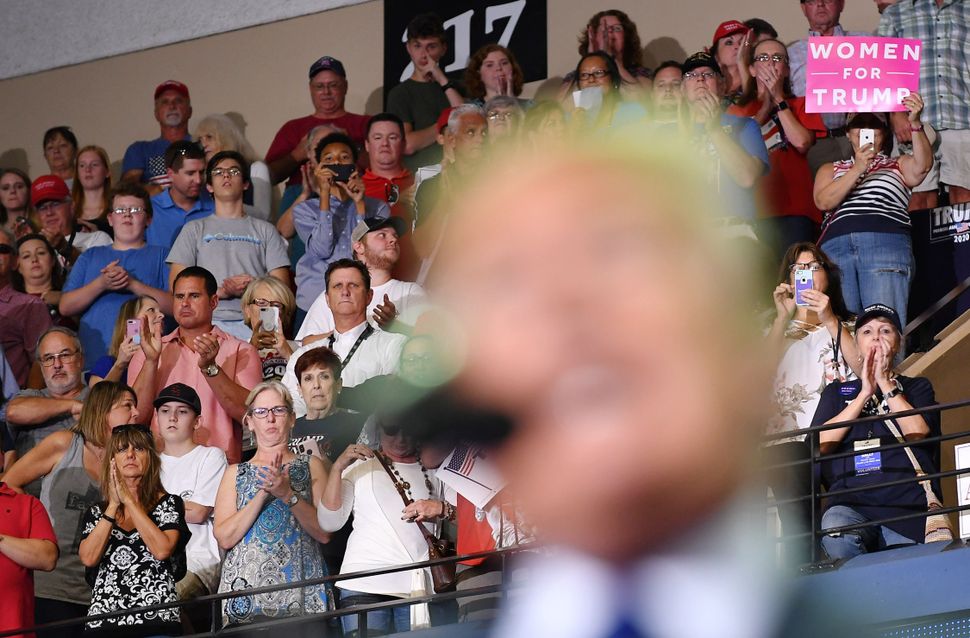 On any given day, one doesn’t have to look very far — no farther than your newspaper or news broadcast — to see a world spinning wildly out of control, to see every single decent human value trashed and then trashed again, to see egregious behavior treated as if it were normal, to see the worst people empowered and the already dispossessed further disempowered and even abused. This past week it was Brett Kavanaugh who provided the examples and the lessons: Lying shamelessly doesn’t matter. Assaulting a woman doesn’t matter. Self-control doesn’t matter. Nothing really matters. It should go without saying that if there are no minimal standards of character for candidates to the highest court in the land, where probity is the whole point, or used to be, then are there any standards left anywhere?

Of course, that hasn’t been the central question in the debate over his confirmation. That debate, like everything else in America today, has been political. The country is divided, we read endlessly. A “second civil war,” New York Times’ columnist Thomas Friedman called it this week. And the Kavanaugh nomination is just another sign of the divide. Conservatives love Kavanaugh, and his lies and behavior be damned, because he promises to upend every liberal value that survives, while liberals detest him for the same reason. Tribalism is the term du jour.

But I think that framing, which is always the framing now, misstates things, and misstates them to our peril. Forget the political divide. The real divide in America is a moral divide, with those who have basically dispensed with traditional moral values for political ones on one side, and those who still believe in old values, on the other. To call it a civil war understates the situation too; it is a full-scale revolution – one of the most serious transformations in the country’s history, and it is happening right under our noses.

Forget politics, for the moment. Real revolutions aren’t political. Politics simply provide an opportunity for real revolutions to take root, and real revolutions are inevitably moral. Germany didn’t become the most reprehensible nation in the history of mankind in the 1930s because of politics. Politics enabled it to loosen its moral strictures, to spin its moral compass; the loss of any moral bearings enabled it to do what it did. One can say the same thing of Russia under Stalin or China under Mao or now America under Trump. Madmen unleash the cruelty lurking within society. Or put another way, morality is the first casualty of political extremism. We are now living within a moral crisis of epochal proportions.

It matters to frame what is happening to us this way not only because I think it is accurate, but also because it helps us to better process it and see what those of us who still believe in moral values are up against. Politics can be remediated. We can elect a Democratic Congress this fall, maybe even a Democratic president two years from now, and politically things may eventually get back to normal. Perhaps. But that will hardly heal the breach because morality isn’t that easily remediated. Once you lose it – and make no mistake, we have lost it – you can’t just get it back with a new political regime. The deep and angry white male resentment that fuels this moral revolution and that has targeted women, minorities, immigrants, the LBGQT community, and the poor isn’t going away. It was moral opprobrium that had restrained them, shamed them. Then Trump legitimized them, as Hitler legitimized the worst excesses of Germany, and those resentments, once released, don’t cool so easily.

And yet we don’t hear about moral warfare. Pundits don’t talk morality. They are uncomfortable with it. They don’t feel they are in the morality business, which, unfortunately, makes them inadequate to the moment. They hesitate even to call a lie a lie. If ever we needed moral discourse, this is the time, and Donald Trump, a moral bankrupt, is the occasion. Granted, morality seems messier than politics, more ambiguous, too complicated. There are too many moralities, too many divergent views about right and wrong, too much credible disagreement between people. If you think that a fetus is a person, then abortion is murder. If you think it is a cluster of cells that hasn’t achieved personhood, it isn’t. Who is right? What is the moral course of action?

But that argument is something of a copout, an abdication. Most issues, most circumstances, are not especially complicated, morally speaking. If anything, what we should be learning from this moment is that morality is actually pretty simple. We know right from wrong. Many of us have learned it from our parents, and teach it now to our own children. Those old platitudes – love thy neighbor as thyself, do unto others as you would have them do unto you, honesty is the best policy— became platitudes because we understood their moral legitimacy. Many of us, myself included, learned them as well from our religious upbringing, and while I remember very little from my days in temple, to which my parents sentenced me on Saturday mornings, I do remember the lessons of the parables our rabbi gave, if not the parables themselves. I remember the morals of stories about honor, compassion, love, spirituality, humility, modesty, and one that has always stuck with me for some reason, the idea that a man or woman’s good name is the most important asset he or she has, and that one must do everything to maintain it, even if it means surrendering worldly success. I remember all those things. I felt compelled to try to live them. I still do. And when I was growing up, I saw other people try to live them too. Living them may have been hard, but morality was simple. Lest we forget, it still is.

So what happened? In truth, long before Donald Trump, our morality had been eroding. America’s civic religion was never an essentially moral one. While our parents, schools, churches and temples preached old verities, the popular culture emphasized new ones: material success at whatever cost, power, celebrity, hubris – the very things that Trump personifies and from which he has profited. One could almost say that the modern American system, the one conservatives tout so loudly, is predicated on amorality, on looking out for your own interests and screwing everyone else. And while conservatives love to put on the fig leaf of Edmund Burke to give themselves some high-minded cover, they have made a politics based on that Social Darwinist idea: survival goes to the fittest, which usually means the richest. The same could be said of religion, which, in a devil’s bargain, all-too-often has allowed itself to be politicized, thus losing its way and its moral authority: overlook Trump’s amorality if you can get an anti-abortion judge on the Supreme Court. I always wonder, what do evangelicals tell their children: Hate thy neighbor?

Into this ongoing erosion came Trump. It has only been two years of moral assault, albeit unrelenting assault, but the days of moral primacy seem eons ago. Whatever else Donald Trump and his minions do, and I am fairly certain they haven’t even done their worst yet, their destruction of conventional morality in record time may be their lasting and irreparable legacy. Once we knew right from wrong and made ourselves conform. Now we don’t. We suddenly live in a moral vacuum where lying, bragging, insulting, bullying, assaulting are now perfectly acceptable, where tearing children away from their parents is policy, where denying the needy benefits is something to boast about, where white supremacists are honored. This isn’t liberal cant. I am talking morality – right and wrong, good and evil. Many of those who oppose Kavanaugh don’t oppose him because he is a conservative; they oppose him because he lacks moral principles.

It is a very long road back to morality, if we can ever get it back. Evil, and I don’t know any other way to characterize gleefully hurting other people, especially the poor, weak and marginalized, is tough to beat, which is why we always tried so hard to contain it. In Germany, it took de-Nazification, re-education, and a continuous drumbeat of shame to re-moralize the nation, and even then, after fifty years of that effort, today it is in a state of moral recidivism.

Unfortunately, you can’t de-Republicanize America, and you certainly aren’t going to re-educate it. Whites are angry. They feel entitled. They are willing to cast off morality to punish those by whom they feel threatened. And that accounts for an unbridgeable chasm – a moral chasm.

A moral crisis requires moral language. There may be two sides in this war, but I don’t mind saying, frankly, that if morality means anything, one side is right and one is wrong, one is moral and one is amoral. Otherwise, how can you explain to your children why men who grope women and even brag about it suffer no consequences? How can you explain how lies go unchallenged, even though everyone recognizes them as such? How can you explain a leader who has no charity, kindness, compassion, love, modesty or decency – the very values we have been taught to revere?

That is why it is important not to treat this crisis as just another political dust up, liberals and conservatives squaring off yet again, but as the moral inversion it is. To save what remains of morality, those of us who still believe in it have to insist upon it. We can point to the nation’s moral decline. We can call out transgressors in moral terms and ask them to justify their behavior morally. We can use words like “evil,” “right and wrong,” “good and bad,” because these terms are meaningful in our current context. We can ask that the media take moral stands, as some did during the civil rights era, where Klansmen and police beating protesters were not considered equivalent to the ones being battered, but instead were labeled for what they were: morally deficient. If we can condemn Trump’s absurd moral equivalence between neo-Nazis and counter protesters in Charlottesville, why shouldn’t we condemn the absurd equivalency between conservatives, who actively and proudly seek to harm vulnerable people, and liberals who don’t? We can ask our religious leaders how they can square their support of heinous behavior with moral precepts. And we can tell our political leaders that we want every policy they advocate to be morally based.