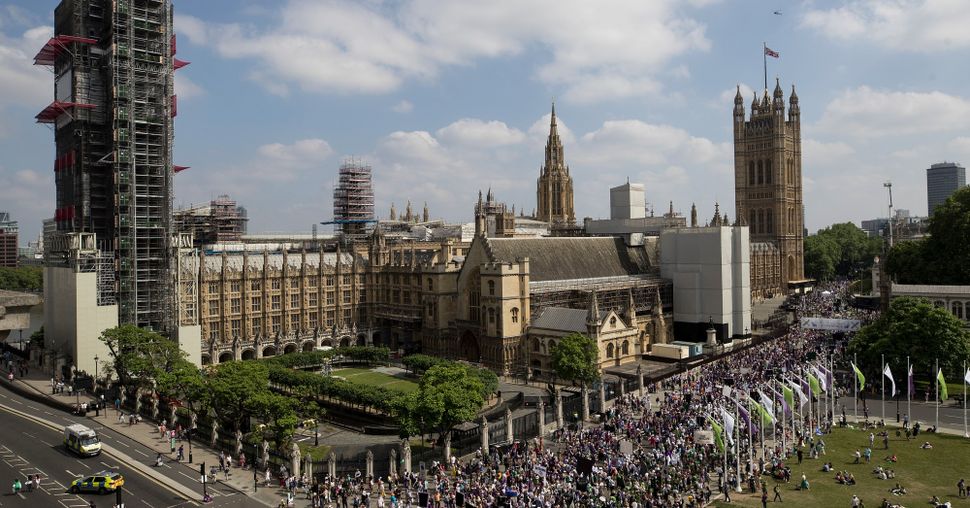 A view of the park near the House of Parliament, the planned site for the Holocaust memorial. Image by Getty Images/Simon Dawson/Stringer

A 50-million-pound Holocaust memorial planned for the Victoria Garden Towers, a public park outside the United Kingdom’s Parliament, has drawn new criticism from an unexpected group: Jewish Members of Parliament.

The memorial was devised by the Ghanaian-British architect Sir David Adjaye and English-Israeli sculptor Ron Arad, who won a contest with their design last October. It’s currently scheduled for completion in 2021. But since former Prime Minister David Cameron’s January 2016 decision to locate the memorial at the Garden Towers, the plans have been controversial.

As reported by The Times of London, environmentalists objected to placing the monument in one of the rare green spaces in the area near the Palace of Westminster. Following the unveiling of Adjaye’s and Arad’s design, residents living near the site of the memorial also criticized the aesthetics of the edifice, a slatted, accordion-like structure of 23 bronze “blades” that Barbara Weiss, a Westminster local and prominent architect, said looked like a “ripped apart ribcage.” Now, The Times reports that seven Jewish lords and a Jewish baroness are joining the chorus of detractors.

The peers, whose names were not disclosed by The Times, wrote in a statement to the paper that “the design evokes neither the Holocaust nor Jewish history, and the risk is that its purpose will not be obvious to passers-by.” They added that moving ahead with the project would ignore “well-founded protests from neighbours [sic].”

A spokesman for the UK Holocaust Memorial Foundation told The Times “the Holocaust memorial will remind us all that a central role of democracy is to encourage tolerance. No location in Britain is more suitable.”

Since planning began for the memorial, which is set to boast a subterranean learning center to provide visitors with historical context, critics have wondered whether a forthcoming revamp of the nearby Imperial War Museum’s Holocaust gallery would render the project redundant. The Jewish peers suggested enhancements to the already-planned galleries in lieu of the monument.

In their comments, the peers also advocated for new initiatives to counteract anti-Semitism and anti-Israel sentiment among British youth.