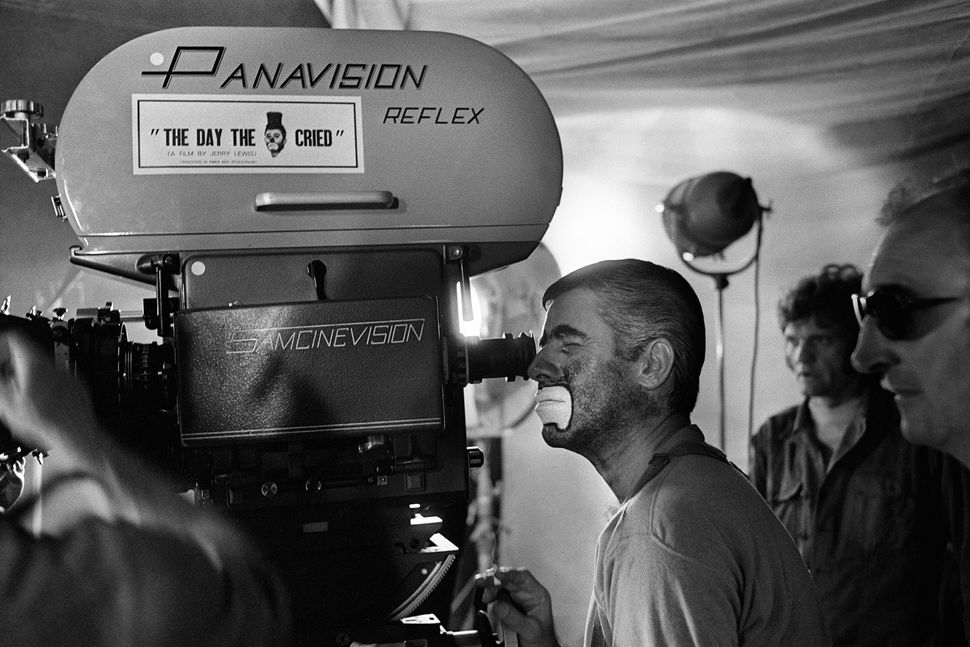 Jerry Lewis on the set of “The Day The Clown Cried.” Image by Getty Images

Jerry Lewis tasted celluloid on at least one occasion. Not metaphorically, or at least not entirely so. In his slender opus, “The Total Filmmaker,” Lewis writes, “I have a confession. Crazy. I have perched in a cutting room and licked emulsion. Maybe I thought more of me would get on to that film. I don’t know. I do know that plumbers don’t lick their pipes. With emulsion, it’s easy to get turned on.”

Lewis’s enthusiasm and involvement in all aspects of the production of his films means that he is indeed unusually present in each frame of his movies, any salivary input notwithstanding. Interested viewers can now see the director’s first taste of his craft, a series of overqualified “home movies” created nearly a decade in advance of his official directorial debut, “The Bellboy” (1960). These very early Lewis B-sides are among the features, curiosities, and visual materials currently featured at MoMA for their series, “The Unknown Jerry: Home Movies and More from the Jerry Lewis Collection at the Library of Congress.”

Made under the informal auspices of Gar-Ron Productions (named for Lewis’s elder sons, Gary and Ron), the films have a likeable ramshackle quality, showing the Total Filmmaker-to-be having a grand old time with a few close friends, albeit in the presence of a small but competent film crew. This being Lewis, though, the friends in question happen to be genuine Hollywood royalty, including Tony Curtis, Janet Leigh, and Dean Martin. The presence of such accomplished performers within Jerry’s home movie makes for a sort of cognitive dissonance that becomes one of the films’ defining impressions. Indeed, it’s a testament to Lewis’s charisma that his pals appear downright giddy to be in an honest-to-goodness movie. From the looks of things, you’d never assume that these are people who for the most part made their living in front of rather more pedigreed cameras not far away. The films also represent authentic juvenilia from an artist who made juvenilia, or at least something like it, his trademark even when he was at the very heights of his field.

The Gar-Ron films are fairly direct and immediate knock-offs of big titles of the day. “The Re-inforcer” (1951) takes aim at the Humphrey Bogart mob film “The Enforcer” (1951), while “Fairfax Avenue” (1951) is Jerry’s version of no less a classic than “Sunset Boulevard” (1950). As befits something created as a lark amongst friends, neither film is so much an attempt to tell a cohesive story as a series of gratifying gags. “The Re-inforcer” has Dean Martin as a gangster named Joe Lasagna, who gets bumped off early and is replaced by nervy lieutenant Tony Curtis. It also has a scene where Curtis and his crew sing a song called, “I Like Chrysanthemums.”

Attempting to deliver of “Jewish Sunset Boulevard,” (itself helmed by German-Jewish émigré Billy Wilder and co-starring his countryman Erich von Stroheim), “Fairfax Avenue” boasts a sense of humor perhaps too overtly Jewish for Hollywood proper, with Curtis playing a delicatessen delivery boy who finds himself acting as the factotum for an aging actress. Gamely played by Janet Leigh (Curtis’s wife at the time), the diva is a veteran of the Yiddish stage, known for her work at the Second Avenue Theatre and in the process of writing her memoirs for ¬¬¬— who else? — the Jewish Daily Forward. The film boasts yet another unusually Jewish turn from a less-than-Semitic actor in the form of Dean Martin liberally peppering Yiddish into a musical number, smoothly crooning, “I can get it for you wholesale down on Fairfax Avenue.”

“The Re-inforcer” and “Fairfax Avenue” do show Lewis experimenting with the medium-specific formal humor that he would master with his later features. Both films trade on his signature self-reflexivity and overt artifice, wielding their own cheapness in the same manner that he later work would employ the nearly magical largesse of the studio system. “Fairfax Avenue” has a running bit in which Curtis leaves the frame by miming descending stairs where clearly none could exist. In “The Re-inforcer,” Lewis fashions an extended gag involving a flagrantly fake dummy, winning laughs by having the man-shaped-sack emit something resembling a Wilhelm scream. In the same film, Lewis uses the famed Kuleshov effect to set up a fake movie called “The Great Caruso” starring himself, framed from the neck up as an all-but-disembodied (and mustachioed) head, hammily lip syncing along to an operatic show-stopper.

In his features, Lewis can often feel like one the studio filmmakers closest in spirit to the avant-garde, and his home movies are likewise fairly redolent of the underground. Seeing Lewis as a beloved performer going outside of the system to try his hand at directing with a few close friends, it’s possible to imagine an alternate future in which Jerry became something like the slapstick Cassavetes. But Lewis’s sensibility was ultimately too pop for this scenario to attain, and the filmmaker these movies most recall is none other than Andy Warhol, the American cinema’s foremost laureate of people indulgently screwing around, who once remarked, “my idea of a good picture is one that’s in focus and of a famous person” (indeed, Lewis’s home movies arguably get the better of Warhol’s films on both counts). In fact, two decades after “Fairfax Avenue,” Warhol would also try his hand at his own version of “Sunset Boulevard,” producing “Heat” (1972) directed by his former manager-turned-indie auteur Paul Morrissey and starring Joe Dallessandro and Sylvia Miles.

Lewis’s home movies recall some of his later movies as well, though less the bigger budget studio films for which he’s best known than the off-kilter late works produced long after his keys to the Hollywood castle had been confiscated. As in “The Re-inforcer” and “Fairfax Avenue,” the Lewis of “The Big Mouth” (1967) and “Which Way to the Front?” doesn’t so much sacrifice narrative coherence and believability for laughs, but burns them up spectacularly upon the ritual pyre, cackling madly before the conflagration. Seeing the sheer joie-de-vivre of Lewis’s preliminary directorial experiments, his long retirement seems all the more strange and unnatural – after making “Cracking Up” in 1983, Lewis directed only a handful of episodes for TV, going silent between 1992 and his death in 2017. One wonders if there might be some more home movies locked away in a vault somewhere, proof that the magnetism of the emulsion was indeed inescapable.