How Lovely P.G. Wodehouse Was — Such A Shame About The Anti-Semitism 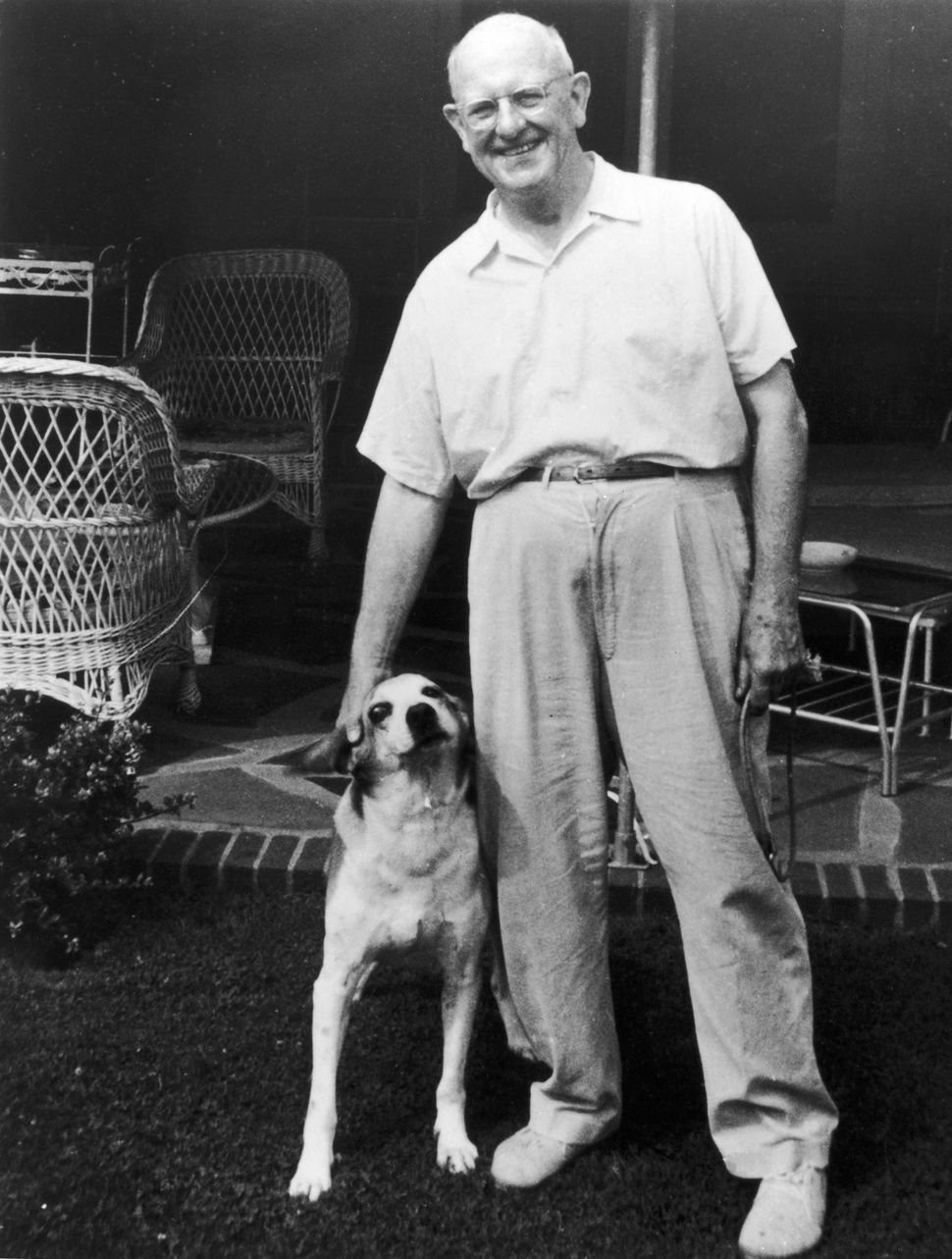 On October 15, Westminster Abbey in London announced plans to dedicate a memorial to P.G. Wodehouse, the humorist whose characters Jeeves and Bertie Wooster have amused millions. Among reported devotees were many readers of Jewish origin, from philosopher Ludwig Wittgenstein to the classicist Abraham Wasserstein (1921-1995) of the Hebrew University.

Wodehouse, who died in 1975 at age 93, was long under a cloud for having made five radio broadcasts in Nazi Berlin in 1941, after being released from detention as an enemy alien. These broadcasts, largely in Wodehouse’s trademark spoofing style, infuriated listeners when thousands of his compatriots had been killed in German air raids. This episode was long investigated by UK Intelligence, and later in a series of biographies. While the decision by John Hall, Dean of Westminster and chaplain to Queen Elizabeth II, completes Wodehouse’s posthumous rehabilitation, some questions remain.

The murkiness is due in part to fans confusing Wodehouse with his daffy characters such as Wooster, Gussie Fink-Nottle, Stilton Cheesewright, and other comic denizens of the British upper crust. Despite his personal reputation for being naïve and unworldly, when not creating such droll nitwits, Wodehouse could be artfully deceptive, like any fiction writer. In his 1930s story “The Rise of Minna Nordstrom,” Wodehouse parodies Hollywood titans such as his employer Louis B. Mayer, by inventing Jacob Z. Schnellenhamer’s Perfecto-Zizzbaum Corporation, the result of a merger of the entertainment giants Colossal-Exquisite company, Isadore Fishbein’s Perfecto-Fishbein, and Ben Zizzbaum’s Zizzbaum-Celluloid. These entities founded by businessmen with Jewish-sounding names amount to mild mockery. Yet Wodehouse felt genuine ire about Mayer’s success. In June 1931, Wodehouse told the Los Angeles Times that he was overpaid and underworked in Hollywood. When this caused some controversy, Wodehouse wrote to a friend,

“The trouble is, you see, all these Jews out here have been having a gorgeous time for years, fooling about with the shareholders’ money and giving all their relations fat jobs, and this gives the bankers an excuse for demanding a showdown. Well, if [the interview] results in Mr. Louis B. Mayer having to cut his salary (which at present is a snappy eight hundred thousand dollars a year), I shall feel I have done my bit.”

Singling out Jews as targets for suspicion or reproach was not unusual for Wodehouse. In January 1949, he wrote to a British friend:

“A curious thing about American books these days is that so many of them are Jewish propaganda. Notice in [Norman Mailer’s] “The Naked and the Dead” how the only decent character is Goldstein. [Irwin Shaw’s] “The Young Lions” is the same. It is a curious trend. The Jews have suddenly become terrifically vocal. Did you see that picture, ‘Gentleman’s Agreement?’”

Four years after the liberation of the concentration camps, Wodehouse was wondering why Jews might be “suddenly” expressing themselves. Rather worse, in May 1952 he wrote to a friend about a colleague in comedy:

“One odd thing about television is the way it shows people up. I always used to think Groucho Marx screamingly funny. I saw him on television the other night, and he was just a middle-aged Jew with no geniality whatever, in fact repulsive.”

As this letter was only published decades after it was mailed, Groucho missed an opportunity to reply, which would have been memorable.

Even before the war, as Hollywood historian Brian Taves notes, some of Wodehouse’s fellow screenwriters suspected him of being anti-Semitic. Philip Dunne, a left-wing script writer, helped to found the Screen Writers Guild (SWG). Film historian Nancy Lynn Schwartz cites Dunne’s belief that around 1937, Wodehouse’s “hatred” for “members of the SWG was not just because of the union but was an anti-Semitic matter. Wodehouse, you know, was later accused of collaborating with the Nazis.”

Among those alert to such accusations would have been Werner Plack, a Nazi operative stationed in pre-war Hollywood as a freelance propaganda agent. Plack took part in recruiting British traitors to help the Nazi war effort, and would play a role in organizing Wodehouse’s radio broadcasts from Berlin.

Wodehouse was living in a comfortable tax shelter of Le Touquet, France when the Germans invaded, deporting him to detention camps in France, Belgium, and Upper Silesia. When he was freed from the last-mentioned, he was invited to make radio broadcasts, ostensibly to thank American fans for their concern during his ordeal. He accepted and was paid a substantial sum by the Nazis, in addition to film rights, a salary for the year 1944, and free lodging in luxury hotels in Berlin and Paris. Wodehouse rubbed elbows with Nazis, including Hitler’s personal interpreter Paul Schmidt. Another was John Amery, a British Nazi of Hungarian Jewish origin, later executed for treason, who had recommended Wodehouse to the Germans as a potential propagandist. Wodehouse oddly transferred money from his own account to Edward Delaney, a stridently anti-Semitic American commentator who after working with Father Coughlin, broadcast Nazi propaganda from Berlin.

Through it all, Wodehouse’s fictional jests differed noticeably from his seriously expressed views. His novel “The Code of the Woosters” (1938) mocked a British Fascist leader, fictionalized in part from Sir Oswald Mosley. Yet in 1939, as his friend and biographer Frances Donaldson recalled, while playing golf, Wodehouse had reacted to concern expressed by his friends about what would happen to Europe under Nazi rule. Wodehouse replied, “What I can’t see is what difference it makes. If the Germans want to govern the world, why don’t we just let them?”

In his notorious radio broadcasts, alongside flippant moments expected from a humorist are sober reflections about “nasty-looking” French officials and how Wodehouse had acquired a “wholesome loathing for Belgians which is the hallmark of the discriminating man. If I never see anything Belgian again in this world, it would be all right with me.” Unlike these repellent British allies, Wodehouse asserted, the Nazis he had encountered were “genial.”

A public outcry ensued, along with more measured responses, such as that of the British diplomat Harold Nicolson in his diary:

“I do not want to see Wodehouse shot on Tower Hill. But I resent the theory that ‘poor old Wodehouse is so innocent that he is not responsible.’ A man who has shown such ingenuity and resource in evading British and American income tax cannot be classed as impractical.”

Indeed, Wodehouse cannily negotiated post-war interrogations by MI5, the UK’s domestic counter-intelligence and security agency, and dissembled publicly about how well he knew Werner Plack, among other subjects. Investigators noted his disingenuous replies, concluding that Wodehouse might have faced charges of treason had he ever returned to England after World War II. Instead, he remained in America, while successive UK governments blocked plans to honor him over the years. Finally, against informed advice, a knighthood was pushed through on the personal initiative of Prime Minister Harold Wilson, shortly before Wodehouse’s death.

His admirers still offer, as Wodehouse did himself, the “some of his best friends” defense that he worked with too many Jews to be anti-Semitic. One day, perhaps, Wodehouse’s delightful novels, a permanent addition to English literature, may be easier to separate from their not always enchanting author.

How Lovely P.G. Wodehouse Was — Such A Shame About The Anti-Semitism