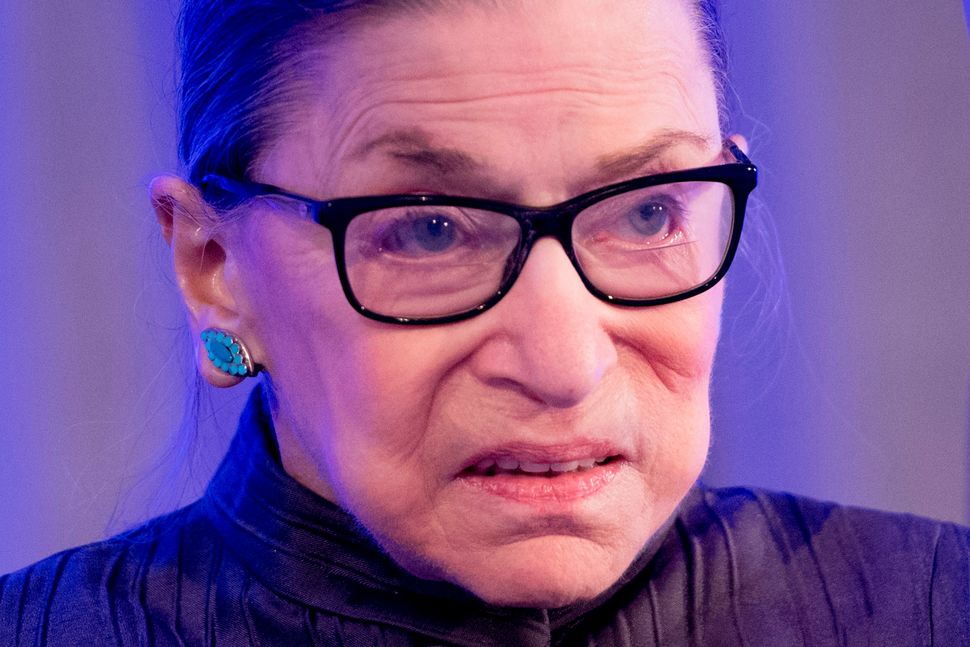 Among the virtues of Jane Sherron De Hart’s magisterial and timely biography of U.S. Supreme Court Justice Ruth Bader Ginsburg is that it prompts reflection on what it takes — for a woman in particular — to reach the summit of professional accomplishment. Or, more precisely, what it took in that not-so-long-ago era of sex-segregated classified advertisements and other forms of gender-based discrimination.

Ginsburg, nominated to the Supreme Court in 1993 by Bill Clinton, was blessed with not only a first-rate intellect and a prodigious work ethic, but also with luck. De Hart, an emerita professor of history at the University of California, Santa Barbara, suggests that her cultural heritage also mattered — that the 85-year-old jurist’s commitment to social change is rooted in tikkun olam, the Jewish imperative to repair the world.

What is unquestionable is that Ginsburg’s legal career — as a pioneering feminist advocate, law professor, federal judge and Supreme Court Justice — has played a considerable, and increasingly celebrated, role in lowering the very barriers that made her accomplishments so rare.

In recent years, Ginsburg’s blistering Supreme Court dissents have made her a pop culture icon, spawning T-shirts, Internet memes and a 2015 book, “Notorious RBG: The Life and Times of Ruth Bader Ginsburg.” Ginsburg’s close friendship with the late U.S. Supreme Court justice Antonin Scalia, in defiance of their political differences, inspired Derrick Wang’s comic opera, “Scalia/Ginsburg.” This past spring an admiring documentary, “RBG,” directed by Betsy West and Julie Cohen, showed Ginsburg working out with a personal trainer and embracing her pop-cult status. A feature film slated for Christmas release, “On the Basis of Sex,” directed by Mimi Leder and starring Felicity Jones, will focus on Ginsburg’s path-breaking 1970s litigation.

Some of the obstacles Ginsburg herself encountered now seem astonishing as well as infuriating. Despite a glittering academic record — she earned a coveted spot on the Harvard Law Review before transferring to Columbia and graduating tied for first in her class — Ginsburg was rebuffed universally by corporate law firms, including the one where she had completed a summer clerkship. In 1959, women lawyers were an anomaly, and Jews, too, still faced discrimination. The fact that Ginsburg was married and a mother didn’t help.

In De Hart’s telling, only the forceful involvement of one of her Columbia professors, Gerald Gunther, salvaged her prospects. He strong-armed and cajoled a fellow Columbia law alum into offering her a judicial clerkship. Not surprisingly, Ginsburg excelled. After a stint studying the Swedish legal system, she chose a teaching career, starting at Rutgers Law School before moving on to Columbia.

Ginsburg’s character and fortitude were manifested along the way. Raised in the immigrant stronghold of Flatbush, in Brooklyn, Ruth “Kiki” Bader was an avid reader whose early influences included Anne Frank and Henrietta Szold, founder of Hadassah. She suffered a devastating loss when her mother, Celia Bader, died of cancer just shy of Ginsburg’s high school graduation.

Reserved and stoical, Ginsburg kept her troubles mostly to herself. Over the years, she out-performed and outworked her male competitors, pulling collegiate all-nighters long into adulthood and refusing to allow either illness or grief to derail her.

Her greatest piece of luck seems to have been her marriage to her Cornell University schoolmate, “the clever, supremely confident” Martin D. Ginsburg, who would become not just a prominent tax lawyer but also the most accommodating and supportive of husbands.

As De Hart relates the story, “Marty” spied Ruth Bader on campus and asked his roommate to arrange a date. The romance began slowly, as a close friendship, but gathered steam. De Hart quotes a male friend’s recollections: “Ruth was a wonderful student and a beautiful young woman. Most of the men were in awe of her, but Marty was not. He’s never been in awe of anybody.”

De Hart, who was able to interview both Ginsburgs and many of their intimates, seems entirely smitten with Marty Ginsburg. She repeatedly touts his intellect, humor, warmth and culinary prowess — acquired, it seems, partly in self-defense, given his wife’s hopelessly bad cooking.

Not only was Marty Ginsburg unthreatened by his brilliant spouse, he was unabashedly her booster. A tax case he brought her — involving disparate tax treatment accorded to a man, Charles E. Moritz, caring for his mother — helped launch her famous series of equal-protection cases. Later, her husband lobbied for her judicial nominations, calling politicians and soliciting letters on her behalf from their wide network of influential friends. In his final, touching note to her before his death, in 2010, of cancer, he writes, “What a treat it has been to watch you progress to the very top of the legal world.”

For all its engaging biographical detail, the heart of “Ruth Bader Ginsburg” is De Hart’s analysis of the 14th Amendment cases that Ginsburg argued as director of the American Civil Liberties Union’s Women’s Rights Project and later adjudicated from the bench. De Hart makes the point that Ginsburg’s gradualist approach as an advocate was highly strategic, if not uniformly successful.

Written in clear language and grounded in historical context, these pages ably explain Ginsburg’s influence in shaping the evolution of the standards by which judges assess discrimination against different groups in American society. For some readers, though, a discussion larded with terms such as “strict scrutiny” and “rational basis” may prove less compelling than Ginsburg’s personal story.

De Hart herself deserves a nod for fortitude. This biography was 15 years in the making — not least because a 2008 California wildfire destroyed her home, her research and her manuscript. She hardly could have been blamed for giving up. Fortunately, one former research assistant had retained earlier drafts of some chapters, and De Hart was able to backtrack and re-create the rest. We should be grateful that she did.